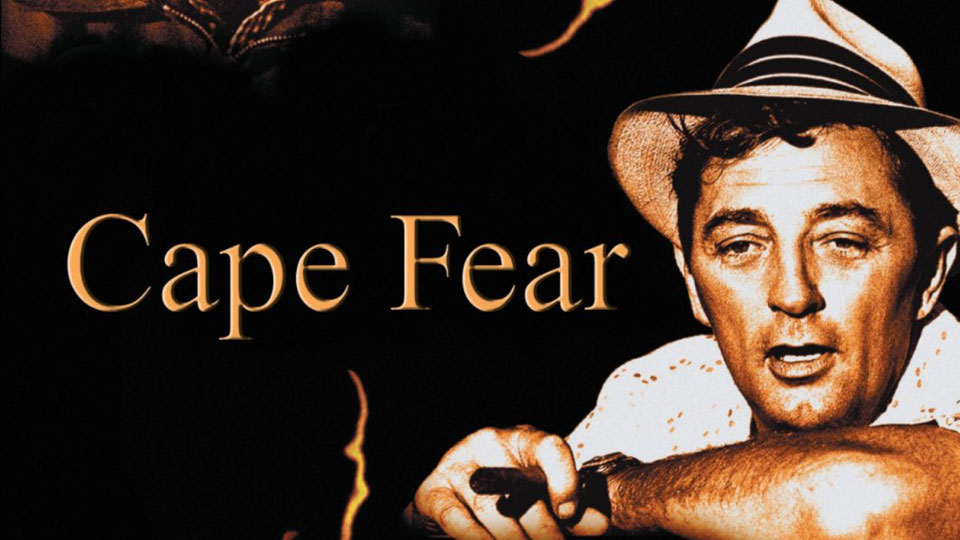 The original 1962 movie Cape Fear – which was made three decades before the Robert De Niro remake that took the same name – is enjoying a welcome re-release on DVD.

The disturbing psychological thriller is notable for one of the greatest performances of malice and menace in cinema history: Robert Mitchum as Max Cady. He is pitted against a fine portrayer of upstanding honesty and integrity: Gregory Peck. Together they are electric.

Lawyer Sam Bowden (Peck) finds his happy family life with his wife and daughter unhappily disturbed when he is approached in his car by Max Cady (Mitchum), a rapist (or so it is heavily hinted) whom Bowden had testified against, securing his conviction. Cady is now a free man once more, and contacts Bowden to quite openly suggest he is seeking revenge against him.

Cady begins a series of mind games against Bowden, who, knowing Cady’s disturbed and violent character, is naturally concerned for the safety of his wife and daughter. Whilst Bowden has the support of his police chief friend (played by Psycho’s Martin Balsam) and a private investigator (a pre-baldness, pre-Kojak Telly Savalas), Cady is cunning and leaves no evidence that he has broken any law. Bowden tries to pay him off, but Cady isn’t interested in money. He’s only interested in making Bowden’s life a misery. Bowden is pushed closer and closer to the edge as it becomes clear that Cady is forcing him into a deadly showdown.

Cape Fear is a remarkably ahead of its time film in tackling the subject matter of psychotic sexual predators (although the word ‘rape’ is never actually used). Mitchum is so charismatic that his portrayal of the cool and clever Cady is dangerously seductive, and he steals the picture. Whilst Gregory Peck is, as always, solid in the part of the lawyer, Sam Bowden is a far less showy part, and as such, it’s Mitchum’s Cady that draws and manipulates the audience’s attention. Few other Hollywood film-makers at the time were so daring, except of course Alfred Hitchcock – whose work very heavily influences the movie.

From details such as the casting of Martin Balsam, who had played the ill-fated private investigator in Psycho, to the musical score by Bernard Herrmann, whose immortal orchestration for the same film two years earlier made it a far more effective movie; to the stylistic choices of black and white film print, and gloomy, unusual lighting that adds to the suspense, Cape Fear could easily have been directed by Hitchcock. As it is, it was J Lee Thompson calling the shots, who crafts a film full of tension. It’s perhaps only the thought that Hitchcock might have found even more ingenious ways to ratchet up the tension a few turns more, especially during the somewhat hurried climax, that stops the movie short of all-time classic status.

The picture quality of the film in this release is excellent, even on DVD, with a very clean transfer from the black and white prints. There are substantial extras on the disc too, including a trip into the archives to learn of the thoughts of the (now deceased) director Thompson and star Peck, in spliced-together separate interviews, towards the ends of their lives, and they give their articulate reminiscences of making a movie that was a milestone in both their careers.