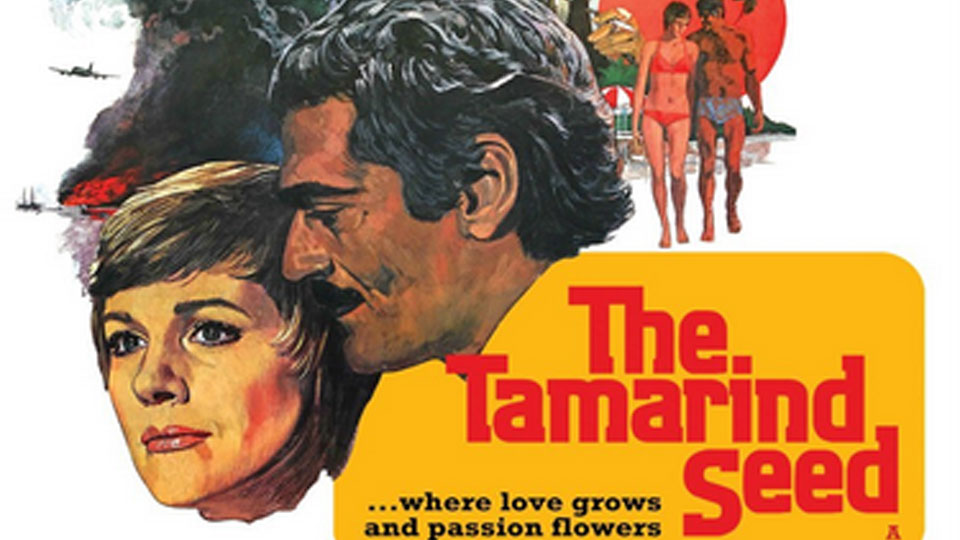 For evidence that there was more to Blake Edwards than the endless treadmill of the Peter Sellers-based Pink Panther yarns that limped on with ever-decreasing returns, look no further than 1974’s The Tamarind Seed. The movie stars Julie Andrews, who was married to Edwards at the time (and remained so until his death in 2010) as the assistant of a man high up in the British government who has had affairs with others. She’s teamed up in a romance with an espionage twist opposite Omar Sharif, who is playing a Russian agent who is either seeking to woo Andrews out of amorous intentions, or to extract state secrets out of her to feed back to his Lenin-worshipping superior General Golitsyn (Oscar Homolka). One of the clever elements of the movie is that you’re kept guessing about Sharif’s intentions until the final act.

OK, so nobody can seriously take Sharif for a Russian (though his accent is excellent), and Andrews conveys very little warmth throughout the movie, leaving the viewer wondering what on earth Sharif sees in her. Despite that, Sharif gives a masterclass in charm as Feodor Sverdlov, and most viewers will fall for his doe eyes and smooth manners even if Andrews remains snottily aloof. The only nagging substantial weakness of the movie is Andrews’ dry and unsympathetic performance. Although a weak leading lady is fundamental issue, there’s enough going in favour of the movie to praise it in other areas.

The supporting cast is superb. Special mention has to go to Sylvia Syms as the wife of a British double agent. She exudes anger, bitterness and sexual frustration as the subplot involving her marriage to Fergus Stephenson (Daniel O’Herlihy) plays out, and is vastly more entertaining and exciting to watch than she has any right to be. Even Anthony Quayle, who once described himself as ‘boring’ is a joy to watch here. He substitutes his native Lancastrian accent for the other side of the Pennines, but even playing a steady and dependable Yorkshireman, Quayle finds plenty of opportunities to stand out. The Tamarind Seed has to rank amongst his best performances. Bryan Marshall is as solid as ever as his younger, and somewhat lascivious colleague.

With scenes shot in Barbados, London and Paris, The Tamarind Seed emerges as a convincing and intriguing espionage movie that benefits from the exotic locations. Another aspect in favour of the production is John Barry’s sumptuous score, which is likely to repeat in your head for days after watching the movie. Barry strongly captures the romantic element of the story, and his melodies are beautifully translated by the orchestra.

Blake Edwards’ direction is very good: he keeps the story interesting and engaging. True, he fails to bring the best out of Julie Andrews, and a few shots conveying the development of relationships are rather clumsy in their exposition, but he never loses sight of the story. Overall, The Tamarind Seed is perhaps an overlooked gem from the 1970s and from Edwards’ canon. The tension ratchets up in the final act and the twists at the end are very satisfying.

This new Blu-ray release is also to be commended for some great extras. If you like Russell Harty, you are in for a treat. There are two lengthy interviews with the late chat-show host with Omar Sharif, though sadly not about The Tamarind Seed. There’s also a Harty interview with director Blake Edwards, though he comes on a long time after the main star, Peter Sellers, and again the frustration is that it’s not the feature film that’s the focus of the interview. There’s also a suite of John Barry’s irresistible score. The movie has been beautifully transferred onto high-definition, with rich colours, a clean print and decent sound.