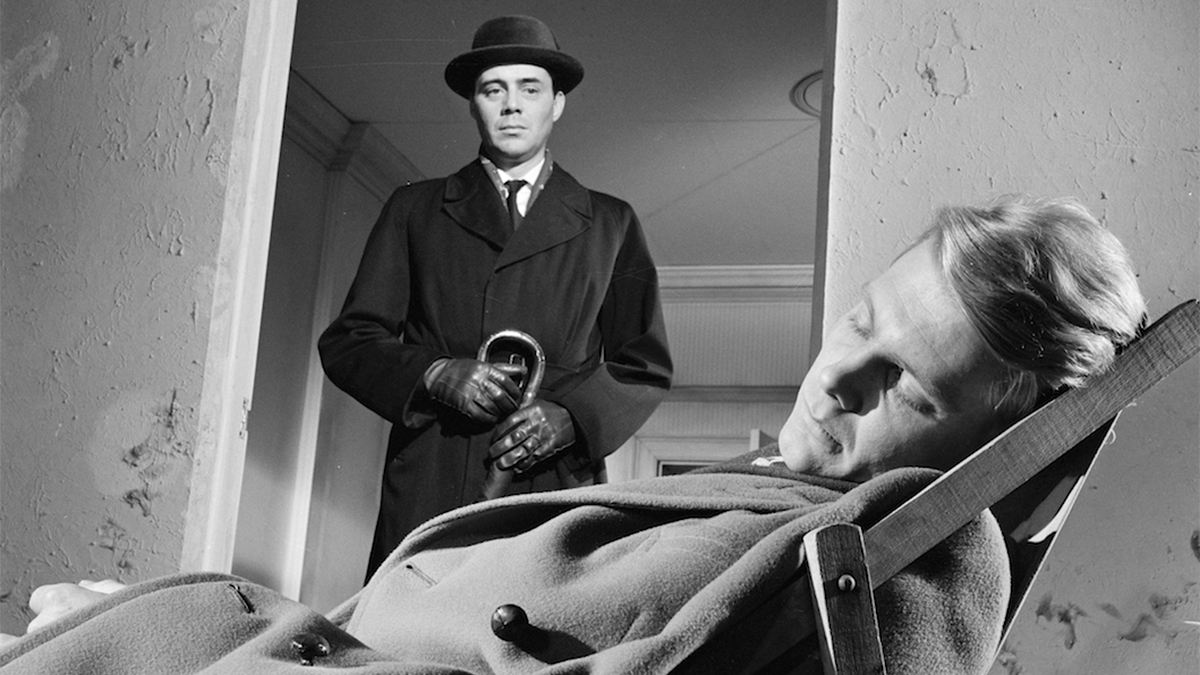 StudioCanal celebrates much-loved British film star Sir Dirk Bogarde’s centenary by releasing a brand new 4K restoration of one of his most-celebrated films – Joseph Losey’s ‘The Servant’. Filmed during the bitterly cold winter of 1962, the film captures the changing times in the UK, and London’s cultural and sexual revolution as the Swinging Sixties got underway. It’s a film that couldn’t have been made a decade earlier, during the austere post-war era, or later, once the last residues of the old world represented by James Fox (who plays Tony) had been consigned to the history books.

The script by Harold Pinter gives audiences some idea of what to expect. Best known as a playwright, Pinter evidences his theatrical background with a screenplay that takes place over very few locations. Most of the action is set inside Tony’s swanky Chelsea apartment. The icy script combines with Joseph Losey’s menacing direction and the crisp, black and white film stock that makes effective use of shadows and darkness. The end result, with a sleazy jazz score by John Dankworth thrown in, is a pressure cooker environment and a claustrophobic, uncomfortable, yet spellbinding viewing experience.

Young aristocrat Tony (James Fox) moves into his London apartment as he plans his future. He hires a manservant, and Barrett (Dirk Bogarde) arrives punctually. Impressed, Tony hires him, and finds Barrett useful, especially for bringing him drinks. Discord descends on the household with the arrival of Tony’s girlfriend Susan (Wendy Craig). In one memorable scene, Susan shows her ignorance in front of Tony’s friends over the definition of ‘poncho’, and she is also rude to Barrett and suspicious of his motives, which offends Tony’s good-mannered sensibilities. However, when Barrett brings his ‘sister’ Vera (Sarah Miles) into the mix, ostensibly as a maid, the traps being laid for Tony to fall into become ever-clearer to the viewer, who in turn begins to understand Susan’s instinctive animosity towards Barrett. Pinter and Losey keep on turning the screw as Barrett forces Tony to become ever-more reliant upon him, as the roles in their destructive relationship steadily invert.

Pinter’s screenplay makes for a clever psychological drama. The character of Barrett is surely one of the most fascinating in cinema history. Brought to life by an actor of the calibre of Dirk Bogarde, Barrett is truly unforgettable. Unusually adopting a Manchester accent, Bogarde creates a unique character in his considerable repertoire, and instils in Barrett a history and a background that feels authentic and credible. It is his signposting of Barrett’s malevolence that is so ingenious, even in his quieter moments during the early sequences. When he first meets Tony, he is standing over him, looking down at him, casting silent judgement on the young man who has fallen asleep in the afternoon after having had too much to drink. It takes a special kind of venomous spirit to prey upon a decent person’s weaknesses and encourage them down a route to destruction. Achieving as much through quiet subtlety is a stunning artistic achievement by Bogarde.

The rest of the cast are equal to Bogarde’s masterclass in insidious villainy. James Fox was a newcomer to the big screen at the time, let alone to leading performances, but he is the perfect marriage of stuffy yet vulnerable and naive. Just as Bogarde very carefully carves out turning points in his character’s development, so too does Fox, and the last moment we see him in the film is so far removed from the ambitious young man who employs Barrett in the first place that he really takes the audience on quite the journey with him. It was the start of a long and successful film career for Fox.

Although they have less screen time than the two men, the leading women make a strong impression too. Wendy Craig’s Susan is arguably the character audiences change their view of the most as the events of the film unfold. Her initial reserve and stiffness, we later learn, is a cover for her insecurity and her concern for Tony’s well-being. In not always giving Tony what he wants, she loves him truly. Sarah Miles plays Vera, undoubtedly the most intriguing character, and someone whose background and true identity we are never quite allowed to glimpse. Yet Miles creates an intriguing seductress, prettily packaged in a pretence of innocence. Is she ultimately setting out to destroy two men? The unresolved enigma of Vera creates the talking points for audiences after seeing the movie. Losey gets the best out of his remarkably talented and mostly young cast. Blacklisted from Hollywood, Losey was their loss and the British film industry’s gain.

Ultimately, ‘The Servant’ is a close-up examination of a poisonous male relationship, and the catastrophic influence manipulative people can hold over those too weak and naive to see clearly what’s right in front of them. ‘The Servant’ makes for deeply unsettling viewing, so much so that it’s one of those films you have to be in the right mood to watch. It takes you to some dark places. Nevertheless, it’s undoubtedly an exceptionally fine cinematic achievement, and this loving restoration is testament to the esteem it holds and reputation is has rightly earned.

Now restored to 4K, ‘The Servant’ looks more stunning than ever before. The level of detail is such that it’s possible to make out the titles on Tony’s bookcases. One is a dustcover copy of Vladimir Nabokov’s ‘Pale Fire’ that’s probably a detail missed on lower resolutions. That level of visual clarity also accentuates the subtlety of the masterful performances, especially in close-ups.

There are some great new extra features that will satisfy devoted film buffs available on the 4K collector’s edition Blu-ray. I especially enjoyed Adam Scovell’s location guide, tracing almost all of the places in London where the movie was made. Tony’s salubrious Chelsea apartment is much-unchanged in the sixty years since the film was shot. Matthew Sweet and Phuong Le provide a video essay, and there are interviews with surviving cast members Wendy Craig, James Fox and Sarah Miles. Bogarde’s biographer John Coldstream talks about the celebrated late actor. Impressively, the discs have the option of watching the feature in either 1.66 or 1.77 aspect ratio.

‘The Servant’ is currently enjoying a limited theatrical release, and is available on 4K UHD Blu-ray, DVD and digital from 20th September.