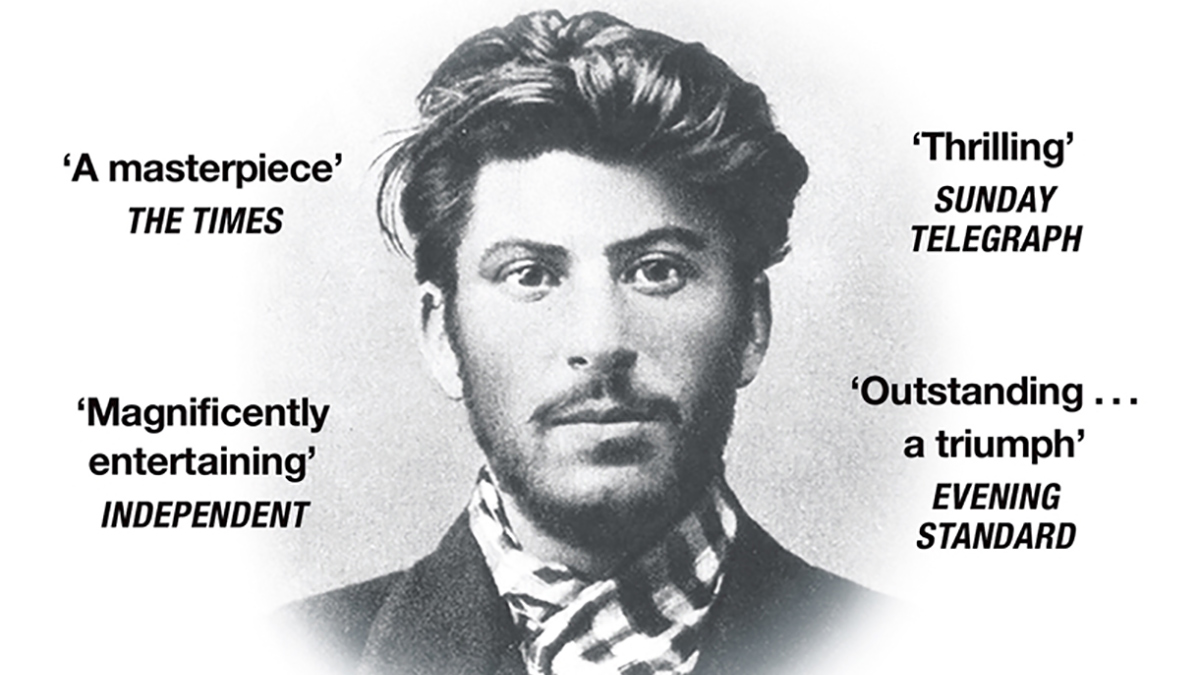 Whatever else anyone might say against Joseph Stalin, the most notorious tyrant of the Twentieth Century, nobody can accuse him of having lived a dull or conventional life. Such an intriguing and eventful personal history has ensured that he is prime subject matter for historians. Simon Sebag Montefiore’s celebrated biography, which was first published in 2008, is being reprinted in paperback. ‘Young Stalin’ tells the story of Stalin’s early life, from his provincial and humble beginnings in Georgia, a southern outpost of the Russian Empire, to the moment when he seized real political power during the October Revolution of 1917, when he was in his late thirties.

The author’s telling of the events comprising Stalin’s life from his birth in 1878 to his rise to influence among the Bolshevik revolutionaries opens with a teasing prologue detailing Stalin’s role in a notorious bank robbery. This insight creates the idea in the reader’s mind of a man who never paid much attention to laws or authority. Although childhoods in the biographies of great people can be the dullest sections of the book, Montefiore paints a vivid picture of Stalin’s formative years. His alcoholic and cruel father, who may not have been been his biological father, introduced young Stalin to violence early on, but instilled within him a self-sufficiency and instinct for survival.

Montefiore doesn’t neglect Stalin’s personal life. His first wife dies tragically early, and Stalin feels guilty for neglecting her. Young, handsome and charismatic, he has no problems in securing mistresses, including one who is underage. The portrait created by the author is of a man so obsessed by politics and Marxist ideology that he has no time for home-building or spousal responsibilities.

The Stalin that emerges from these pages is a complex man, not least in the dynamics of his relationship to religion and priests. Like many in political life, from the time of the Ancients to modern day, he rose to prominence through a combination of intellect, energy, passion, zealotry and immense personal charm, where his foibles of ruthlessness, coldness and psychopathy were certainly no hindrance to reaching the top. There is some sensitivity in the man, as revealed through the verses of doggerel that precede some of the chapters. In the early sections of the book, we follow the story of ‘Soso’, as Stalin was called by his loved ones. How Josef Vissarionovich Djugashvili became known to history as ‘Stalin’ is the story of this book, and what a fascinating tale it is. Almost like a film star, Stalin adopted his own identity and projected that image of himself to the rest of the world.

What you read in these pages are some of the important events that shaped the almost relentlessly violent, troubled and bloody Twentieth Century. There is an account of Stalin’s time in exile in the frozen wastes of Siberia, which was later a place he favoured establishing Gulags. UK-based readers will enjoy the section in which Stalin visits London and spends some time there. Location hunters or devotees of the tyrant will appreciate the details of streets and places that Montefiore provides. There’s also Stalin’s first meeting with Lenin, which (spoiler alert), perhaps isn’t as momentous as casual readers may anticipate.

Montefiore writes with great clarity and with a true historian’s instinct to look on his or her subject dispassionately, without making intrusive moral judgements, but rather leaving it up to their reader to come to an informed opinion about the subject. The prose is sparkling, but packed with details that provide a rounded analysis of a towering figure from recent history. The use of plenty of dialogue is a stylistic choice that gives the writing a conversational, almost novelistic flavour that we found highly engaging. By the end of the piece, tension has built between the two Bolshevik revolutionaries Stalin and Trotsky, just as they have seized power.

‘Young Stalin’ is an accessible biography separated into short, easily digestible chapters. It is pitched well enough to appeal to seasoned readers of historical/political biographies who enjoy extensive research, but not so bogged down in names, dates and details as to belong solely in academia, alienating those who read history for pleasure.

Although the inner workings of the Central Committee and the reasons for the grievances between Bolsheviks and Mensheviks aren’t laboured over, passages examining the ideological Marxist dogma and the rigid factionalism it produces may be a bit rich for some readers’ blood. If you’re looking for a detailed account of the Russian Revolution, or the October Revolution in particular, there are volumes concentrated on those events that provide more analysis than is within Montefiore’s scope to offer here. This volume is a personal account of Stalin’s formative years that keeps its focus on the activities of the revolutionary.

While there may be a nagging sense that the most interesting part of Stalin’s story is yet to be told, ‘Young Stalin’ is but the precursor. It sets up Montefiore’s sequel, ‘Stalin: The Court of the Red Tsar’, which chronicles the rest of Stalin’s life, during which time he never lost his grip on political power. It has the promise of interrogating in more detail how and why Stalin ended up with more blood on his hands than anyone else in human history. ‘Young Stalin’ starts to make these connections, as the dashing young gangster with a fondness for writing poetry is gradually replaced by a more brutal and austere older version of himself. ‘Young Stalin’ sets the groundwork for how he came to be such a canny and unsentimental survivor.