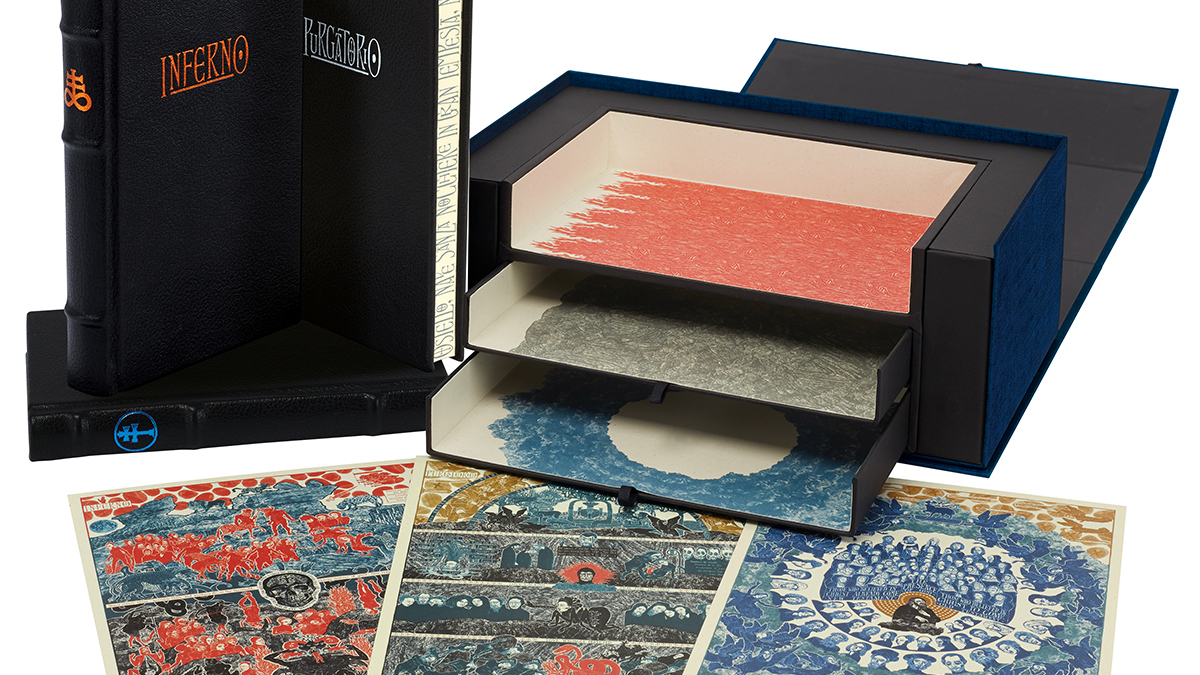 Commemorating the 700th anniversary of Dante’s death in September 1321, The Folio Society has set out to create the most sublime edition of ‘The Divine Comedy’ imaginable. Their new limited edition of one of the greatest classics of world literature is truly a work of art and a spectacular addition to any bookcase. Three exquisite leatherbound books feature 100 illustrations by Neil Packer, in a limitation of just 700 hand-numbered sets each signed by the artist.

Dante Alighieri was born in Florence around 1265, into a family which he claimed descended from the ancient Romans. He wrote ‘Vita Nuova’, ‘Convivio’, ‘De Monarchia’ and ‘Divina Commedia’ (‘The Divine Comedy’), which is widely considered the greatest work of Italian literature. The imaginative power of Dante’s poem has fascinated readers throughout the intervening centuries.

Beatrice, symbol of divine grace, sends Virgil to guide Dante through Hell and up the slopes of Purgatory before leading him into Heaven herself. Peopled with legendary and historical figures, but also with Dante’s contemporaries, the poet’s journey to spiritual enlightenment is expressed with unmatched poetic elegance and still resonates after 700 years.

Tom Walker, The Folio Society’s Publishing Director, began planning this commemorative edition more than two years ago and immediately resolved on persuading Neil Packer to contribute the illustrative scheme. Illustration has been integral to ‘The Divine Comedy’ from the earliest manuscripts, and Packer’s work suggests a natural empathy with Dante’s world, incorporating many and diverse influences including medieval woodblock prints, designs from North Africa and English woodblock prints of the 1930s. The artist has also contributed striking binding designs, hand-drawn lettering, decorative papers for the elaborate presentation box and three superb prints for framing.

Completed with a newly commissioned introductory essay by Pulitzer prize-winning author Jhumpa Lahiri, this limited edition of Dante’s masterpiece achieves Folio’s ambition to create volumes expressive of craftsmanship and dedication to rival the best any age has produced.

This edition of Dante Alighieri’s ‘The Divine Comedy’ is available exclusively from The Folio Society.

Advertisement. Scroll to continue reading.
In this article:Dante Alighieri, The Divine Comedy, The Folio Society