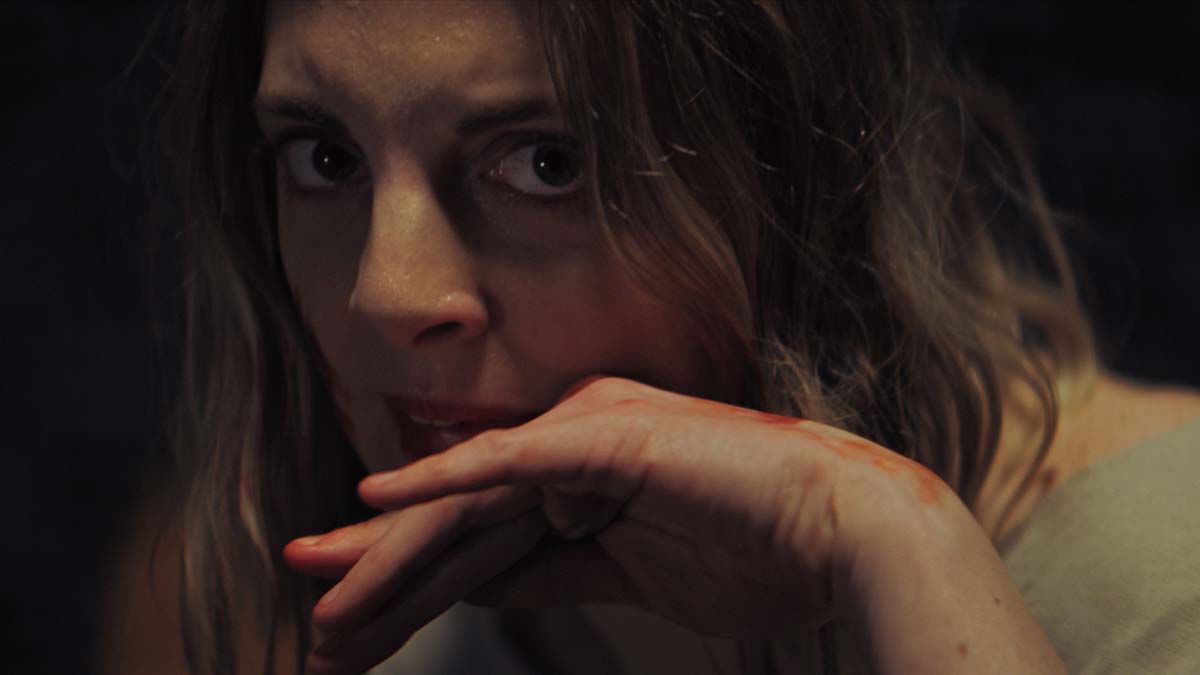 Singer-songwriter Grey (Lauren Beatty) is troubled by hallucinations and struggling to write material for her second album. In a bid to get her creative juices flowing, Grey takes up the offer to record with producer Vaughn Daniels (Greg Bryk). Her girlfriend Charlie (Katharine King So) isn’t keen on the idea after she discovers that Vaughn had previously been accused of murder, but Grey assures her that he was acquitted and there’s nothing to worry about. The couple travels to Vaughn’s remote home to work on Grey’s album but soon after arriving, Grey realises that she might not know herself as well as she thought.

‘Bloodthirsty’ comes from director Amelia Moses and it’s a new spin on the werewolf sub-genre. Very much a slow burn of a film, it takes a little time to get into the story preferring to establish Grey and Charlie’s relationship before introducing the mysterious Vaughn. We see one of Grey’s hallucinations, where she’s eating an animal she’s killed, but she seems to keep them under control through medication. Things start to unravel once Grey and Charlie arrive at Vaughn’s home, with Grey’s compulsion for meat (despite being a vegan) growing stronger.

One of the strengths of ‘Bloodthirsty’ is that it does try to do something different with a very well-trodden sub-genre. Vaughn encourages Grey to use her urges to fuel her creativity, and once she taps into the part of herself she’s been suppressing, the music flows with ease. The two characters form a quick, and unusual bond, much to the dismay of Charlie who isn’t convinced that Vaughn isn’t a killer.

There’s an interesting sub-text too focusing on the power dynamic between the three lead characters. Vaughn is the experienced producer with a solid track record, and he has no issue pushing Grey beyond her comfort zone. Charlie notices this and tries to step in, but Vaughn’s manipulation of Grey throws a spanner into the middle of their relationship. Vaughn’s behaviour towards Grey borders on inappropriate but there are moments where Grey unleashes her primal nature that are just as shocking.

Lauren Beatty is excellent as Grey. She doesn’t overplay the role, instead exploring the subtleties of the character and really connecting with Grey’s pain. She’s matched well by Greg Bryk who is suitably mysterious and unnerving as Vaughn, giving an intense performance that is quite captivating. The film’s music, mostly composed and performed by Lowell, becomes as much of a character as the actual characters themselves, driving forward the narrative and exposing layers of Grey along the way.

‘Bloodthirsty’ might not be for everyone but I thoroughly enjoyed it. It’s true that the pacing is slow but I liked that. It gives the viewer chance to live with the characters for a bit before the story unveils its somewhat unexpected climax. I haven’t seen a werewolf film quite like this before and I really appreciated that the film-makers were trying to breathe new life into the sub-genre. If you like your horror thoughtful and enthralling, then make sure you check out ‘Bloodthirsty’.