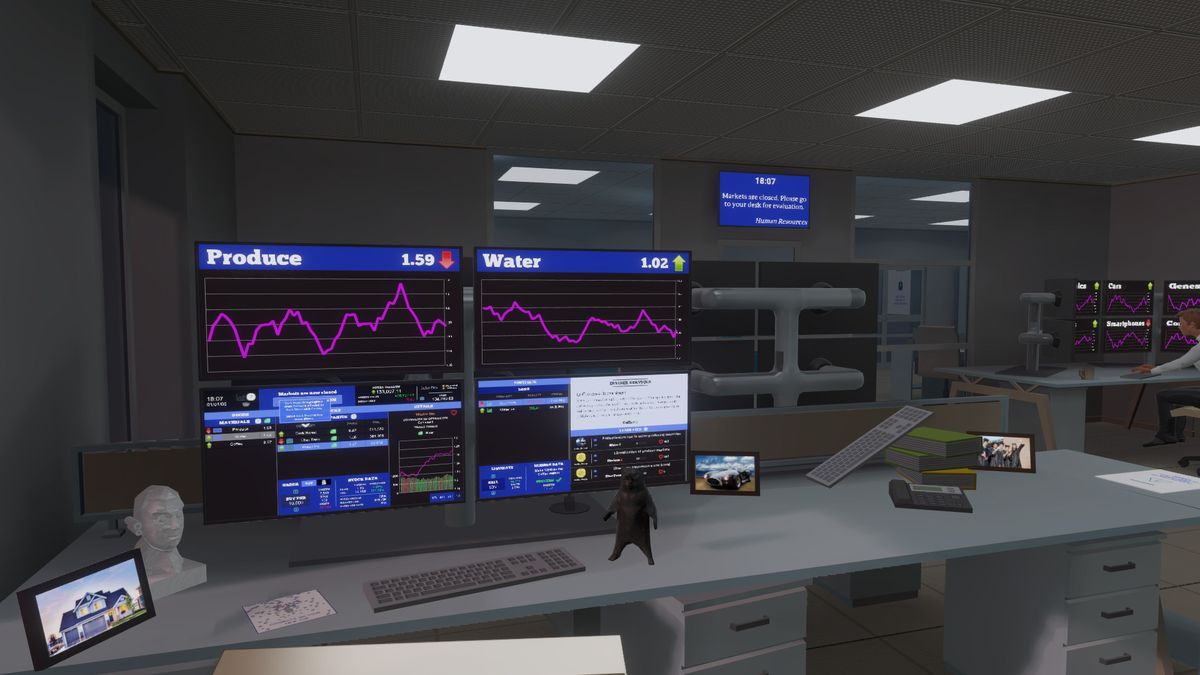 The Invisible Hand is a game about greed, wealth and the lengths people are willing to go to in order to become mega-rich. Set in a fictional trading firm, we are given an insight into the deep levels of corruption companies are supposedly willing to embrace to achieve their financial aims.

You start off as a new trader at Ferios, a high end trading company who will do anything to increase their wealth. You’re a complete rookie but that’s ok as you know a guy who knows a guy and that’s how you got the job. This guy will also introduce you to the darker aspects of trading as the game progresses.

After a brief tutorial explaining stock trading basics, some of the more questionable tactics employed and giving you a rundown of the trading system itself you are set free on the world, or so it seems.

I would have thought that after the tutorial I would have been free to explore whatever avenue I wanted in order to get rich. At first, this does feel like the case. I could send lobbyists to affect the price of a foreign currency and plan and either go long or short accordingly. I could also take advantage of Geistnet, a dark web based resource that has lots of indsider trading information. There are also regular stock tips that are tweeted to the world which can vary massively in reliability. Despite having all of these tools at your disposal, nothing you do matters. As long as you hit the financial checkpoints set out in missions the game plays out exactly the same.

Yes, there is an enforcement agency that monitors your more questionable trades and if you carry out too many they will come at you with heavy fines but by the time they take notice any fine they throw at you will be a pittance compared to your bank balance. The share prices themselves also appear to fluctuate randomly, there is no pattern to discern here. This means you’ll have to have your eyes constantly glued to the screen at all times as a profit can turn into a loss in mere seconds.

To start with, the trading aspects are fun but after a while, I felt like they were simply there as a vehicle to allow the game to reach its conclusion rather than being there to have fun with. As I mentioned earlier, it doesn’t actually matter what you do as long as you win. Progression means going head to head with a rival stockbroker with the winner keeping their job and that’s it. You’ll get to a point where it becomes near impossible to beat a rival and then it’s curtains for you.

Overall, The Invisible Hand starts off well and the prospect of making virtual billions was intriguing, sadly after a few hours (it only takes 3-4 hours to finish) I was losing interest as nothing I did had any bearing on where the game was going. Yes, I was getting filthy rich but the novelty of big numbers in a virtual bank account quickly wore off. I can’t help think that the game is more a story about the corruption that might exist in this financial with a very average gaming experience stuck on top.

The Invisible Hand was reviewed using a digital code provided by the publisher.