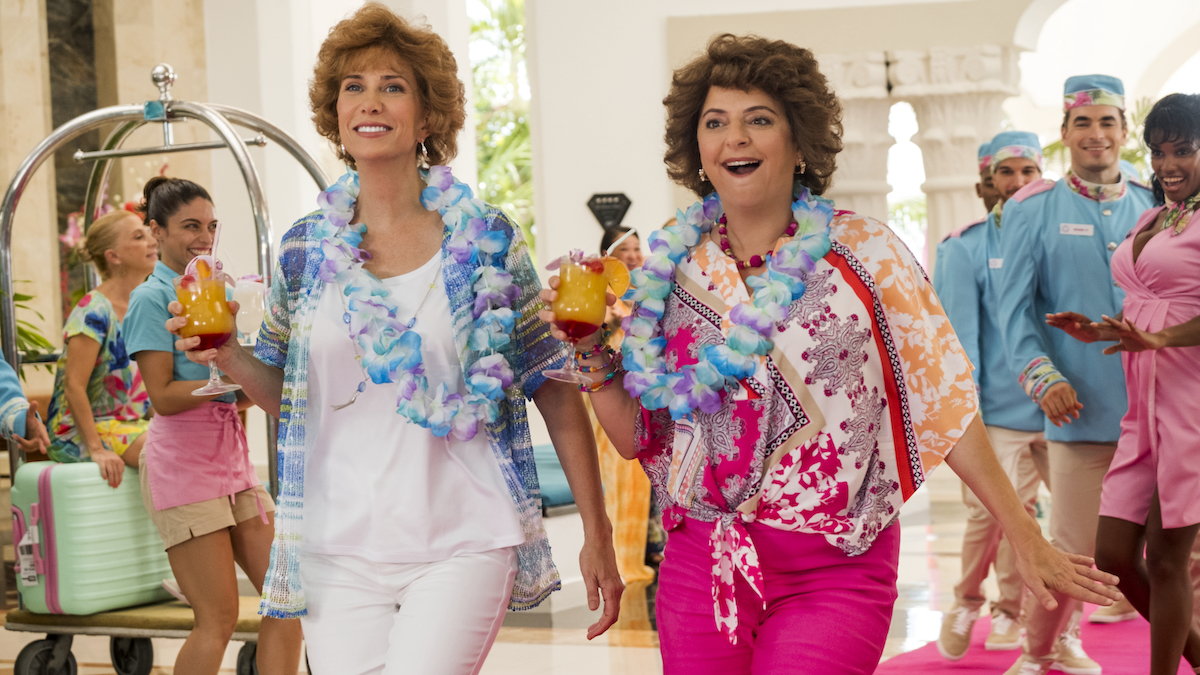 ‘From the writers of Bridesmaids’ is a marketing phrase that will likely conjure an idea of what you might expect from a film. A grown-up comedy with female friendships at the core? Maybe some raucous slapstick humour? Sounds about right doesn’t it? What it doesn’t prepare you for is Kristen Wiig sat on a beach having a heart-to-heart conversation with a crab which has the voice of Morgan Freeman.

‘Barb and Star Go To Vista Del Mar’ is an unclassifiable blast of maverick comic madness from co-writers and stars Annie Mumolo and Kristen Wiig. It is a zany, untethered, technicolor romp, and depending on whether or not you can tune into its unique comedic frequency, you will probably either love or hate. Reader, I am firmly in the former camp.

Mumolo and Wiig are Barb and Star, a pair of middle-aged best friends who decide that after a life spent almost entirely within the boundaries of a small midwestern town, they are going to take a trip to the Floridian resort of Vista Del Mar. What they don’t realise however, is an evil supervillain (also played by Wiig) has plans to destroy Vista Del Mar, and has dispatched her loyal and lovesick henchman Edgar (Jamie Dornan) to ensure it all runs smoothly.

That previous sentence might give you a sense of the tone. It is absolutely bonkers, but joyously so. If the more ‘out there’ moments of films like Anchorman, Austin Powers, and Wayne’s World are your thing, you are in for a treat with ‘Barb and Star’. Bathed in colour, bursting with bright-eyed, big-hearted optimism, and with the silliness ramped up to eleven, it is a riot of daft fun.

Director Josh Greenbaum carefully balances the amount of loose improv, with tightly scripted gags (which come at a furiously fast rate), a surprisingly stunning visual style, and a few showstopping musical numbers. Jamie Dornan, an actor best known for playing serial killers and sex weirdos, is a comedy revelation here. Game for anything, he throws himself into the role, and is rewarded with an instantly iconic song and dance scene.

Ultimately, nothing about ‘Barb and Star’ should work. The plot is goofy, the characters are dumb, the jokes are silly, and the whole thing looks like a cartoon on acid. Greenbaum, Mumolo, and Wiig have taken a big swing with this film and miraculously knocked it out of the park. It might look like a second-rate SNL skit on the surface, but if you keep an open mind and embrace the silliness, you’ll have a great time.

It’s something of a shame that we’re only getting a DVD release of ‘Barb and Star’ in the UK. Such a visually vibrant film really deserves to be seen in high-def, but we must play the hand we’re dealt. And to be fair, it’s a pretty good one, with plenty of fun special features to keep us amused after the film has finished. First up is a feature length audio commentary with director Josh Greenbaum, and writers and stars Annie Mumolo and Kristen Wiig.

Barb and Star: Making Life a Little Brighter is a ten-minute behind the scenes featurette, including interviews with all the main cast and crew. One of the things that really comes across is they all clearly couldn’t believe they were getting this film made, so they held nothing back.

Barb and Star: Casting in Paradise is another short featurette, this time taking a closer look at the cast and what each of them brought to the film. Next up there are six-minutes of bloopers which are just okay, and a selection of deleted scenes, the best of which features Jamie Dornan and Michael Hitchcock (who plays the hotel manager).

Barb and Star Go To Vista Del Mar Fashion Show is a bizarre 90-second catwalk clip on a beach, which I think was part of the original marketing for the film. Reason #497 Why We’re Friends is a ten-minute interview with Annie Mumolo and Kristen Wiig discussing their creative relationship and the development of the film, interspersed with clips from behind the scenes.

The Visionary Sets of Barb and Star is a short clip with production designer Steve Saklad looking at the overall visual style of the film. And finally there is Emotional Dancing with Jamie Dornan, a seven-minute behind the scenes featurette about Dornan’s character, centred around his brilliant, maraca-shaking musical number.