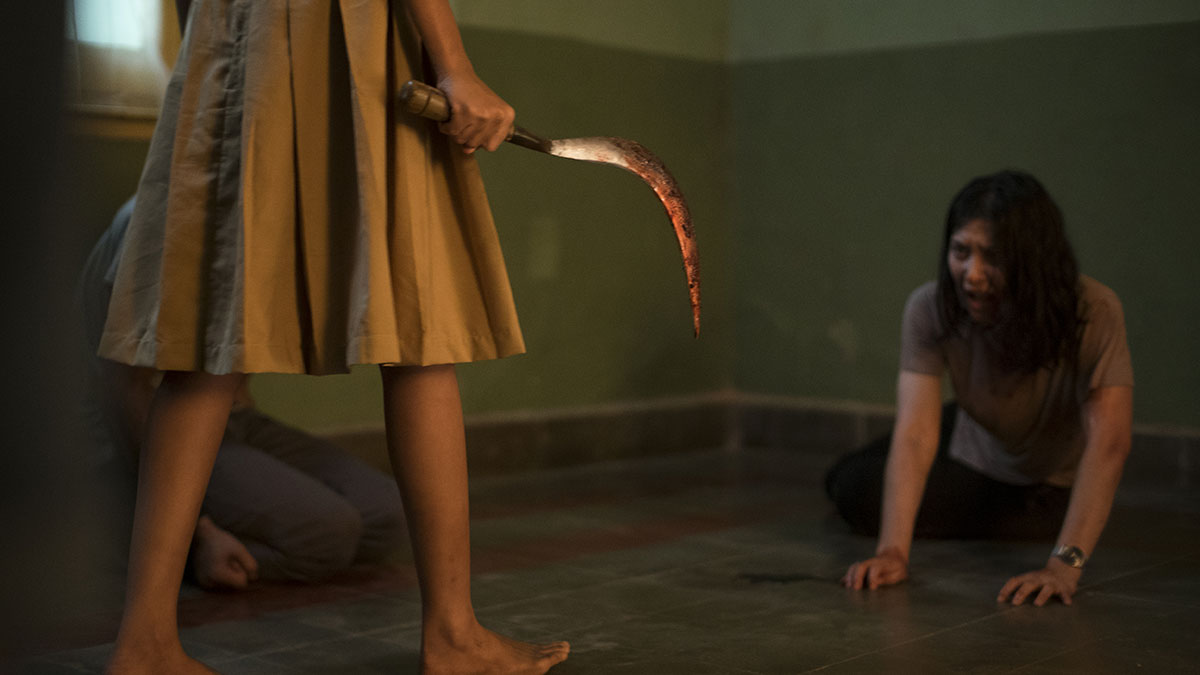 Hanif (Ario Bayu) takes his wife Nadya (Hannah Al Rashid) and their three children to the orphanage that he grew up in to pay his respects to the gravely ill director Mr Bandi (Yayu A.W. Unru). Joined by his childhood best friends Anton (Tanta Ginting) and Jefri (Miller Khan), and their families, the group plans to stay overnight at the orphanage and give their families an insight into their pasts. Once there, the group is terrorised and an evil that was thought to be long buried, returns to exact revenge.

‘The Queen of Black Magic’ is a remake of the 1981 film of the same name. This version is helmed by Kimo Stamboel and written by Joko Anwar, and it’s a chilling watch that slowly cranks up the tension to ensure you mess your pants before the end credits arrive. The premise is a little hokey – even more so once the truth about the past unravels and you wonder why any of these people would willingly take their family to the god-awful orphanage that the film centres around.

If you put that logical quibble to one side, what you have is a truly effective and at times terrifying Indonesian horror that leaves a lasting impression. I’d advise you not to be lulled into the same false sense of security I was in the first half an hour because once things get crazy, they get gory and batshit pretty quickly. While the film tries to keep your focus on the adults, it’s the children that you’ll gravitate towards, especially Haqi (Muzakki Ramdhan) who is both gullible and much wiser than he should be for his young years.

I don’t want to give too much away about the plot because the secrets that come to the surface are part of what makes the film so effective. What I will say is that when the group starts being terrorised, you might want to find anywhere to look but the screen. There are some incredibly gory scenes, and a lot of creepy crawlies, so the film will definitely test your sick bucket level. The violence does feel justified though, and in keeping with the creepiness that surrounds every scene.

Perhaps the downside of the film is the cast is so vast, not everyone gets the chance to truly shine. There are many characters left underwritten and while we find out things from the main characters’ lives, we don’t find out all too much about who they are as people. Thankfully the story ensures that you stay invested in these characters, even if they’re still nothing more than strangers to you by the time the supernatural element kicks in. Everything builds to a finale that is the definition of nerve-shredding and as a horror fan, I found that to be quite thrilling.

‘The Queen of Black Magic’ is a good old-fashion, effective shock horror that will draw you in and keep you on the edge of your seat until the final moments. There is some good character work (although there are too many characters) and the entire cast commits impressively to the material. If being terrified is your bag, you’ll be hard-pressed to find a film more unsettling than this one. Even better, is that it’s backed up by a story that slowly unravels and hooks you in from the opening moments.

Advertisement. Scroll to continue reading.
In this article:Queen of Black Magic, Shudder