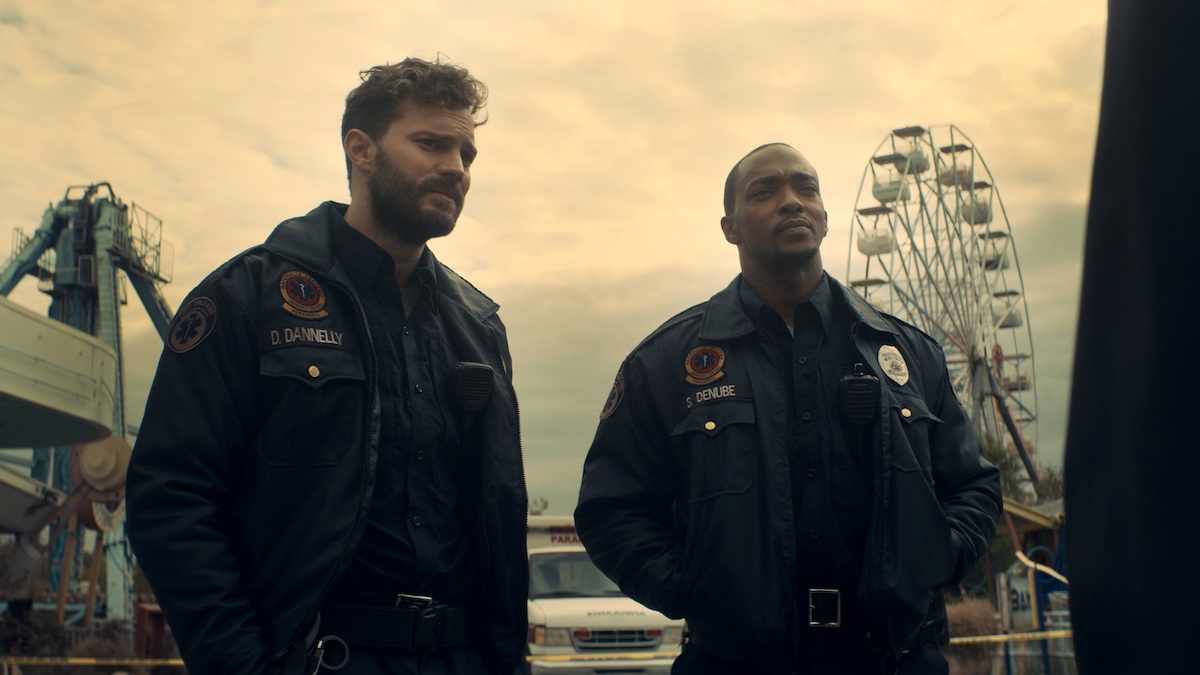 Time, space, and reality all melt away in this extraordinary metaphysical thriller from Justin Benson and Aaron Moorhead. Discerning genre fans have known about this indie directing duo for some years now, with their distinct brand of low budget, emotionally wrought fever-dream horror. After Synchronic, I think we’ll be seeing them break into the mainstream in a big way.

Pulsing with a lurid, woozy vibe, the film takes us on a trip into a hallucinatory nightmare of designer drugs. Steve (Anthony Mackie) and Dennis (Jamie Dornan) are paramedics caught up in a wave of horrifying incidents, following the arrival of Synchronic, a new legal high that has just hit the streets of New Orleans.

Benson and Moorhead tease us with some of the nightmarish trips, as we see people phasing in and out of reality, and interacting with people, creatures, and things that couldn’t possibly be there. By the time Steve and Dennis turn up, they find the users in catatonic or comatose states. These are the lucky ones. Some have been hacked to pieces or spontaneously combusted.

Similar to their previous work, the directors deliver the thrills and spills of sci-fi horror, but without ever losing sight of the characters. The friendship between the two leads is the film’s most engaging attribute. Brilliantly and concisely written, and convincingly portrayed by Mackie and Dornan, who bring a glimmer of star-power and Hollywood sheen to the otherwise recognizably indie stylings of the Benson/Moorhead cinematic universe.

They are both excellent, as the world-weary medics, consciously aware of their own slide into cliché, as middle-aged ennui takes hold of them, and the horrors of their job are blunted with booze with pills. Best friends for decades, Dennis and Steve are two sides of the same coin. They chose different paths in their personal lives, and are now envious and resentful of each other, whilst at the same time trying to reckon with their own decisions. It adds a compelling strand of drama to the otherworldly strangeness of the film.

Without want to say much more, an incident with Synchronic hits close to home, acting as the catalyst for Dennis to start experimenting with the drug himself, hoping to unlock its secrets. At which point the film blooms into something far weirder, far more emotional, and far more topical than you might expect. I, for one, was caught very much off guard by the second half of this film.

Switching gears into full science-fiction mode, in a way that manages to be funny, sad, and terrifying, the film begins to engage with what it means to be a black man in America. At the same time, Synchronic uses its radical sci-fi concept to explore some of the most fundamental truths of life and death, and what we do on this earth with the time we have. After all, that clock never stops ticking.

It’s a bold as hell move, but one that pays off beautifully. Hugely ambitious, belying its very low budget with extraordinary and endlessly inventive visuals, Synchronic is the first great film of 2021.