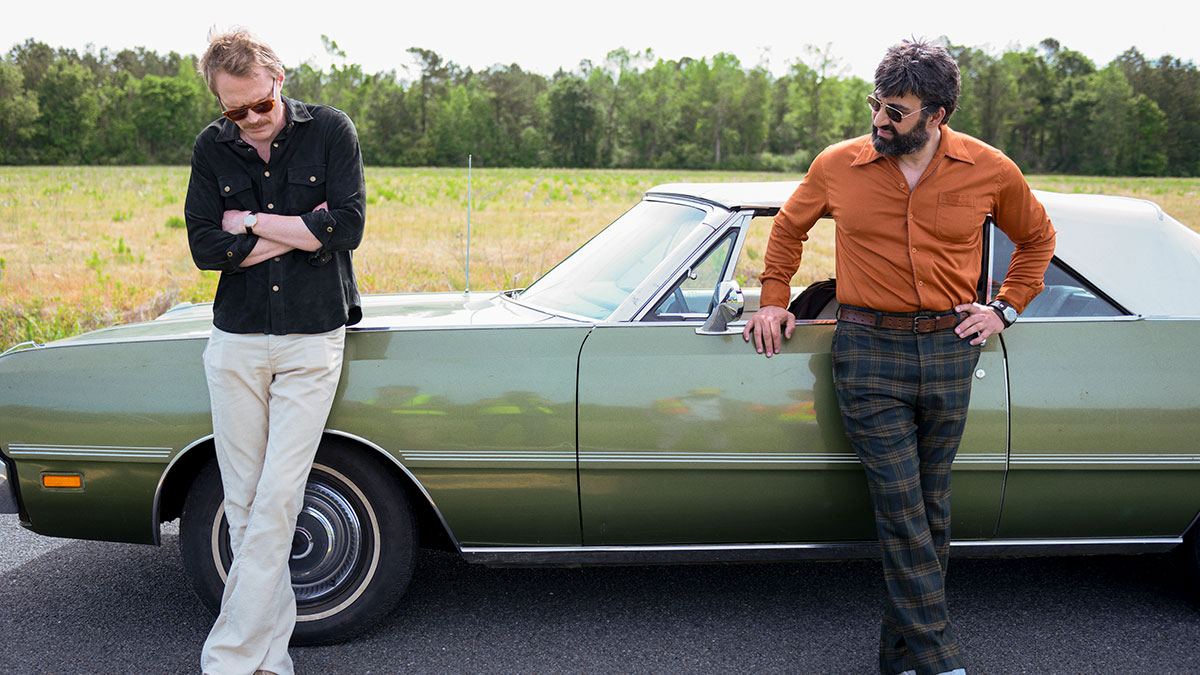 As a big fan of ‘Six Feet Under’, ‘American Beauty’ and ‘True Blood’ (well series 1 at least!) I was excited to see that producer and writer Alan Ball had a new film out on Amazon Prime called ‘Uncle Frank’.

Set in the 1970s as our titular character, Uncle Frank (played by Paul Bettany), is visiting his family in Creekville, South Carolina for his father’s birthday. As his dad holds court and receives gifts from his kin, he seems very quick to belittle his son Frank’s gift whilst praising his other son’s gift. It is clear there is an atmosphere between Frank and his father. Rising star Sophia Lillis (‘IT Chapter Two,’ ‘I Am Not Okay with This’) portrays another family standout as Frank’s academic niece Beth. She is drawn to Frank and he actively encourages her to escape Creekville and the small-town mentality of her family.

A few years pass and Beth has taken Uncle Frank’s advice and moves to New York to study at the same University where Frank works as a lecturer. As her and her parents attend dinner at Uncle Frank’s apartment we meet Frank’s girlfriend of five years Charlotte, but it’s clear that all isn’t as it seems.

As the weeks go on, Beth learns her uncle is having a house party and a new possible boyfriend encourages her to gatecrash; she reluctantly agrees. As she rings her uncle’s door she is greeted by a man named Walid who seems excited when Beth reveals she’s Frank’s niece. We also find Charlotte in bed with another woman, proving that she was just pretended to be Frank’s girlfriend at the earlier family dinner. With Frank nowhere to be found initially, Beth, ends up taking whatever drinks are offered in an attempt to blend in at the party. It quickly becomes obvious that she’s not used to drinking and is soon throwing up with Uncle Frank emerging to pat her back and hold the toilet seat up. As Walid joins them, the pair come clean that they are gay and have been living together for 10 years.

Next morning, as Beth’s getting to know her favourite uncle and his newly revealed boyfriend, the telephone rings and it’s dark news; Frank’s father and Beth’s grandpa has died. Frank is clearly confused by his emotions as he processes the news but it’s Beth’s need to get back for the funeral that sets the pair on a road trip together. The journey gives her the chance to bond with her Uncle Frank and talk about his being gay and his relationship with Walid.

At one point on the journey, Frank feels like he’s being followed so pulls over only to find Walid has rented a car and has been following them. Frank is angry, but eventually Walid talks him round and they come to an agreement that Walid will come to Creekville but stay away from Frank’s family and his dad’s funeral. Beth chooses to ride part of the journey with Walid to get to know him better. It’s whilst alone in his car, through flashbacks that we start to build a picture of Frank’s youth and the events that happened to cause the riff with his father.

A young Frank (played by ‘Henry Gamble’s Birthday Party’ lead Cole Doman) goes swimming with a male friend and after the usual messing around the pair lock eyes and are soon passionately kissing. In the next scene they have gone back to Frank’s family home and are lying on his bed kissing some more when his dad unexpectedly comes into the room. At this point, I will say no more about what else happens, but a major event from that time is slowly teased out that left me stunned.

Back to the current day and as Frank returns to Creekville for his dad’s funeral he also returns to the bottle, with implied issues with alcohol dependency being brought to light by Walid. Frank clearly has a whole host of emotions running through his mind as he deals with his dad being dead, what happened when he was 16 years old and being reunited with his mum, siblings and wider family.

After the funeral, the family are gathered by their lawyer to read the will and Frank’s dad manages to leave one more shock from beyond the grave. Frank drinks some more and then disappears to the same pier that he and his friend used to swim from all those years ago. Walid and Beth realise that he’s been drinking and rush to find him, worried that he may have done something stupid but only find some of his clothes on the pier leaving them frought with worry.

Eventually, Frank turns up at the motel drunk and Walid and he have a massive row whilst Beth looks on helpless. Will Walid and Frank make it up? You’ll have to watch and see.

The film was quite a gentle watch and initially was a little by numbers; gay man moves away from small town to big city because the family patriarch and community don’t approve. But Paul Bettany plays the brooding lead character beautifully, with Sophia ably playing the likable ingenue and Peter bringing warmth and subtle comedy with Walid. The flashbacks build nicely to a shocking twist and the reading of the will and the surprise it holds, further pushed my interest in this film from just ok to very enjoyable. It’s a mildly funny, heart-warming film about family and coming out in the deep south in the second half of the last century.