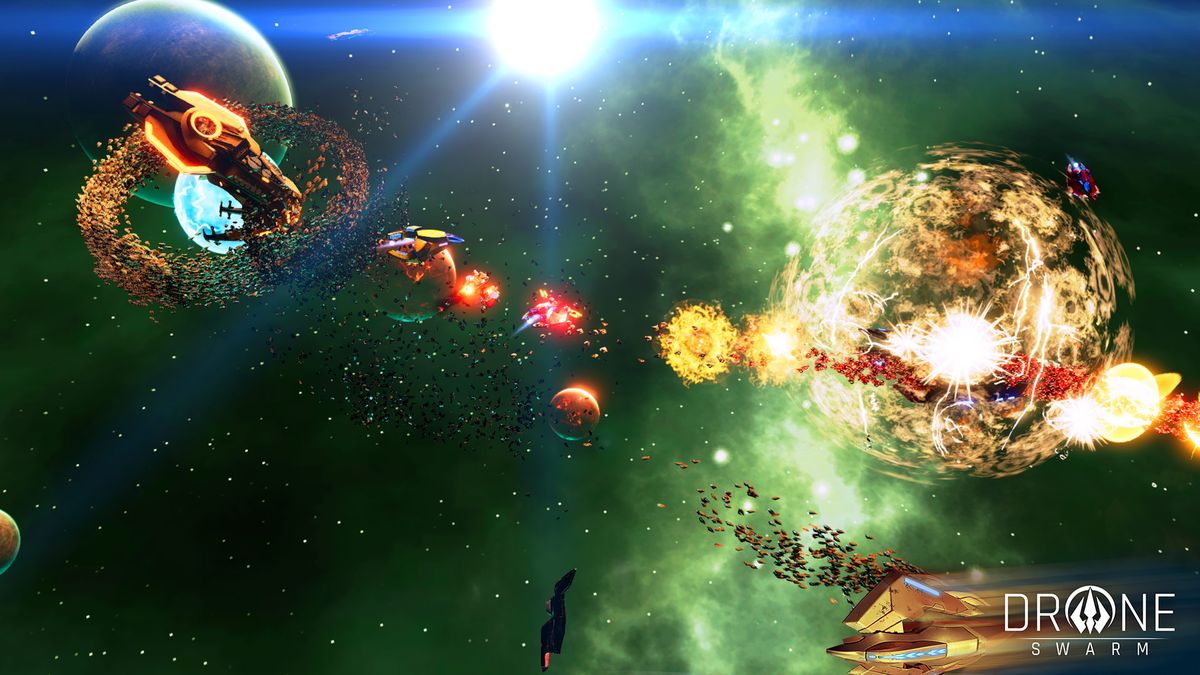 The Earth has been devastated by an alien drone attack, salvation appeared in the form of a Psionic who was able to transfer his consciousness to the drone swarm and take control of it. In total 32,000 Psionics sacrificed themselves in order to totally control the swarm and ensure humanities survival. Set in the far future, Drone Swarm sees you take control of the spaceship The Argo as you traverse space looking to find a new home for what remains of humanity.

Protecting your ship are the afore mentioned 32,000 drones which you can use in various ways to keep your ship safe. All of the battles run in real time and you’ll need a combination of strategy, imagination and quick thinking to keep your mothership safe.

Check out the Drone Swarm launch trailer below:

As you travel through the galaxy you’ll encounter other alien races and they are not pleased to see you. Your drones are your only form of attack and defence and you’ll need to master their abilities to service. Controlling your drones is, on the surface, pretty simple. You select whether you want to make an attacking or defensive move and then drag a route for your drones to take. Your drones will then carry out this task and then return to the main swarm circling the Argo.

Although 32,000 drones sound like a lot I soon found myself running out. This was in part due to them taking constant damage but equally, if not more so, down to my inefficient use of the drones. You really need to take the time to get to know the game and how your drones behave before you’ll have any success.

Watch the first five levels in the video below:

Unfortunately learning how the drones behave only leads to frustration. Quite often I would find my drones completely missing a target even though I’d drawn a clear route through a stationary target in the early levels, they would get close but would fail to follow the routes properly. This issue is exaggerated even further as you progress as your enemies are rarely stationary so you not only have to predict their course but also account for the unreliability of the drones.

As you progress you’ll be unlocking upgrades for your drones and the Argo itself. These range from better defences for the Argo and different abilities for your drones. Drone abilities include a kinetic ball skill where the drones group together in order to knock a ship or asteroid off courses and hopefully into one another. Although the upgrades add a bit of variety to the experience they never feel like they change things in any serious way.

Visually, Drone Swarm looks great and it’s incredibly satisfying to watch your swarm carry out your directions. I really got the feeling that the swarm was a living, breathing entity. The backdrops to each mission are also nice to look at. The cutscenes are presented in a comic book style and whilst they look good the voice acting that accompanies them isn’t the best which is a shame as the story itself is a pretty interesting one.

The missions themselves are short affairs and you generally win or lose in a couple of minutes. I actually found this to be a good thing as more traditional RTS games can take hours just to complete a single mission. It’s great to be able to play for half an hour here or there without having to remember what you’ve been doing in-game for the last few hours.

Overall Drone Swarm is an interesting idea that doesn’t quite work. It has a great story and the swarm itself looks incredible but the way the drones respond to your commands is disappointing. This could be a game to keep an eye on though as with a few tweaks it could be much more impressive.