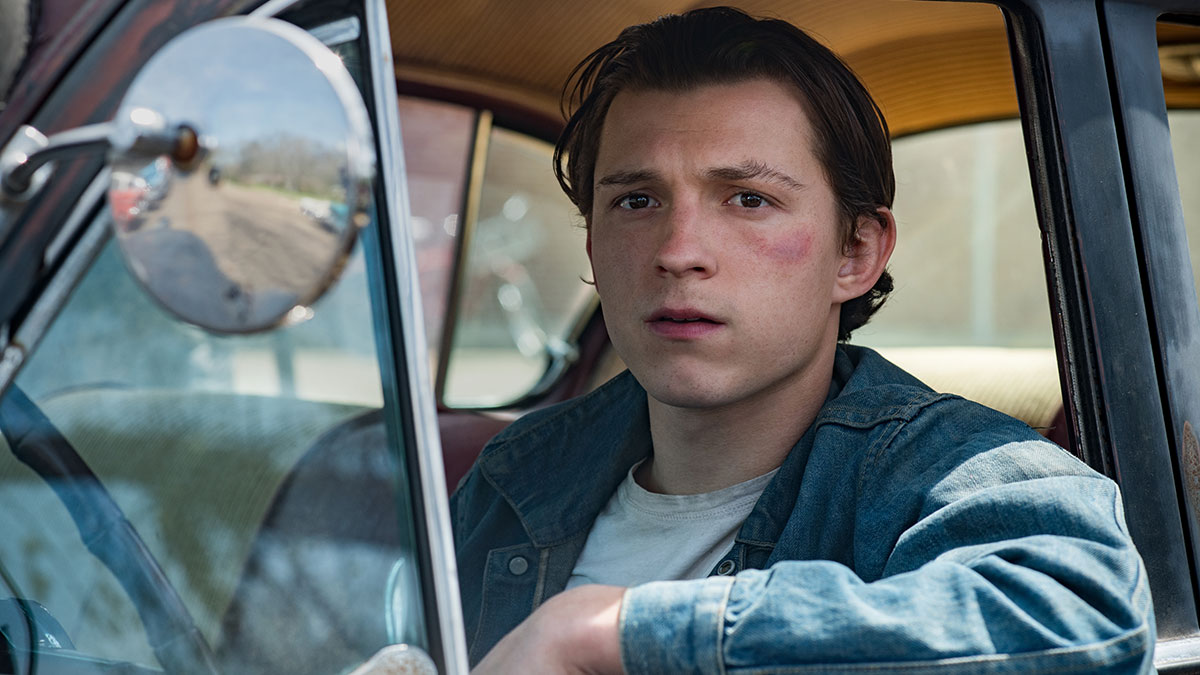 Arvin Russell (Tom Holland) grows up to see more hurt and loss than most people manage in a lifetime. Taken in by his grandmother Emma (Kristin Griffith), Arvin grows up alongside Leonora (Eliza Scanlen), a fellow orphan who has also been through her fair share of grief and trauma. As he tries to protect the ones he love, Arvin crosses paths with a host of colourful characters including a corrupt Reverend (Robert Pattinson), a psychopathic couple (Riley Keough and Jason Clarke) and a Sheriff (Sebastian Stan) out for revenge.

‘The Devil All The Time’ is based on the novel of the same name by Donald Ray Pollock and it pulls together a series of seemingly disparate characters while spanning from the end of World War II to the 1960s. At the heart of the story is Arvin who we see grow from a young boy into a man, and as the film progresses the characters we’re introduced to eventually do come into contact with Arvin, usually in very violent and disturbing ways.

With a running length of nearly two hours and 20 minutes, ‘The Devil All The Time’ is quite an unwieldy and unfocussed film. It takes a long time to set the scene and you have to get through a lot of characters, most of whom end up being superfluous to the plot, before you meet the ones you’re going to spend the majority of the film with. As the film, like the book, spans such a long period of time, time often moves on incredibly quickly and that creates a lot of pacing problems. After the slog of the first hour, the narrative progresses quickly and you barely get to know any of the characters.

I can see that director Antonio Campos, who co-wrote the screenplay with Paulo Campos, was trying to pull together all of the elements of Pollock’s book but that doesn’t work so well for a film. Characters come and go far too quickly, yet in other instances we spend too much time with them and it never amounts to much. The character of Roy Laferty (Harry Melling) is one example as we’re witness to his increasingly disturbing behaviour but his character doesn’t really amount to anything.

Had the film being more focused on Arvin, it would have been a lot stronger. Tom Holland is a capable actor but he doesn’t get enough to do here despite being the lead. His character really stumbles between all of the madcap characters around him, which makes the plot feel like its advancing out of convenience rather organically. His meeting with murderous couple Sandy (Riley Keough) and Carl (Jason Clarke) is over as quickly as it begins, despite those characters being one of the few through lines in the movie.

As is often the case with productions that are top-loaded with stars, not every name gets the chance to shine. Robert Pattinson’s Rev. Preston Teagardin is stereotypically awful but we never really understand why while Bill Skarsgård just gets going as Willard, Arvin’s father, when he’s written out of the film. Mia Wasikowska and Haley Bennett are reduced to the role of wives and they have pretty much nothing to do. Similarly, Sebastian Stan pops up occasionally but not enough to make you care about what goes down in the climax.

‘The Devil All The Time’ is quite honestly a bit of a sprawling mess that’s devoid of character development and doesn’t deliver a payoff good enough to warrant slogging your way through it. With a cast this fantastic, my hopes had been high but sadly the end product is disappointing. While all of the cast are fine, none of them get given the richly written characters they deserve. The best thing about the film is the cinematography and the all too short time spent with Bill Skarsgård as Arvin’s father Willard.