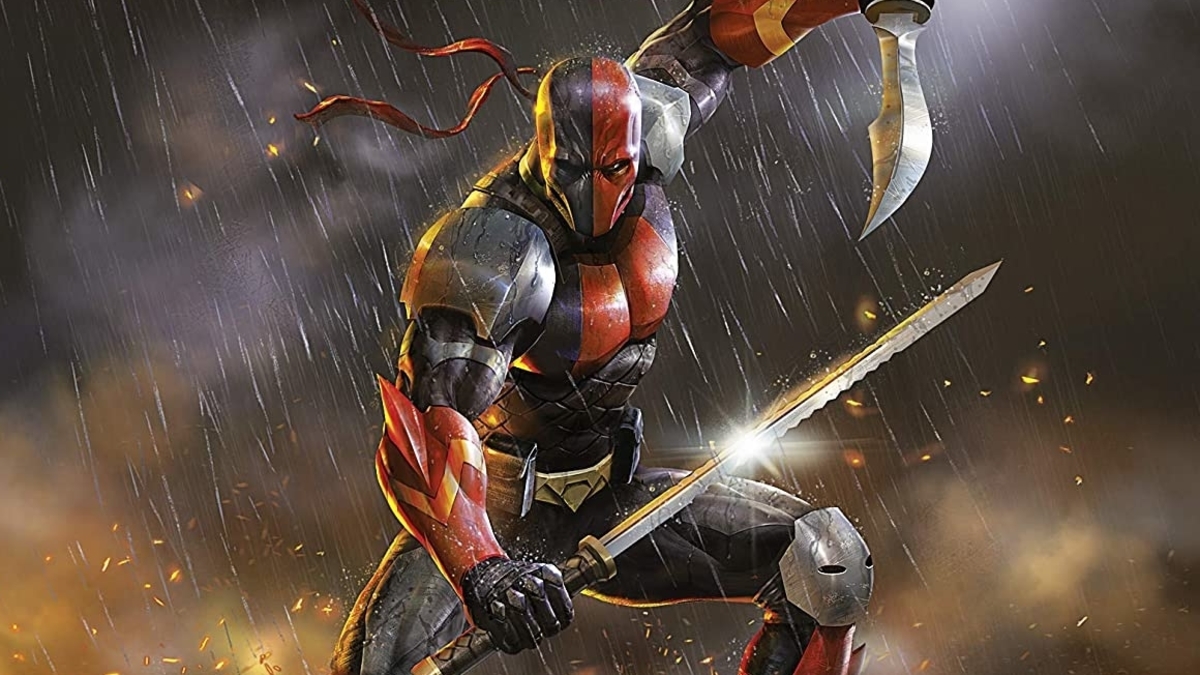 Deathstroke: Knights & Dragons is the latest DC animation to get the movie-length treatment. It plays to familiar beats and at times is a frustrating watch, but there is enough here to keep Slade Wilson fans happy at least.

Despite being teased at the end of Justice League, Deathstroke hasn’t had his moment in the mainstream media sun quite just yet. Joe Manganiello played him in the intriguing snippet which ran at the end of the credits and it promised a much bigger role in future DCEU movies. Whether he will feature more in the upcoming Snyder cut of Justice League remains to be seen but it’s about time this character got its dues.

That is especially the case given how he was ripped off by Marvel some 10 years after he debuted – their creation was Deadpool who has gone on to become a global box-office and merchandising star. They even named Deadpool Wade Wilson to add insult to injury). With Deadshot (Will Smith in Suicide Squad and now Idris Elba in the rebooted The Suicide Squad movies) also getting some of the DC limelight, it’s only right that their other master-assassin Deathstroke gets some love too, and this movie will give fans who are unfamiliar with his story a decent grounding on the type of character Slade Wilson is and the skills he possesses.

The plot of Deathstroke: Knights & Dragons follows Slade Wilson (voiced by The Wire’s Michael Chiklis) who is a secret government super-assassin who travels the world on dangerous missions. When his young son suffers at the hands of one of his enemies, his already fractured marriage to Adeline (Dawson’s Creek star Sasha Alexander) disintegrates and he is forced to distance himself from his family. Years pass and a new foe comes to a head – one that will force Slade to revisit the sins of his past and make amends for the future.

The main problem here is the story. It feels dated from the offset and very predictable to boot. The plot threads run to a specific beat and it makes it all to familiar. It also does not have the emotional pull it should. This is no fault of the vocal cast who do an admirable job with the weak material. This is a spoiler-free review, so I will not go into specifics, but the plot developments feel a bit too much like a soap-opera. This coupled with the copious violence (which the story certainly warrants) makes for odd bedfellows and the end result is a bit mismatched.

The action set-pieces do work well though, with some bone-crunching action and lots of blood to keep things very much in the comic book vein. There’s decent vocal support from the likes of Faye Mata, Griffin Puatu, Chris Jai Alex, Minae Noji and British treasure Colin Salmon as William Wintergreen.

With DC Animation supposedly moving to a new style of animation for future projects, Deathstroke: Knights & Dragons feels like a movie that they would have put out 10 years ago. There is a real need for DC to promote their second roster of characters. They have had a lot of success doing that on TV (Deathstroke even appeared in Arrow) so these animated films are crucial to get the larger word out on these characters. It’s a shame that the end result of Deathstroke: Knights & Dragons falls short because the ingredients were there to make this special. But it’s not a total loss and I’m sure Deathstroke will rise to prominence again – just hopefully with a project possessing more due attention to its characterisation and plot.