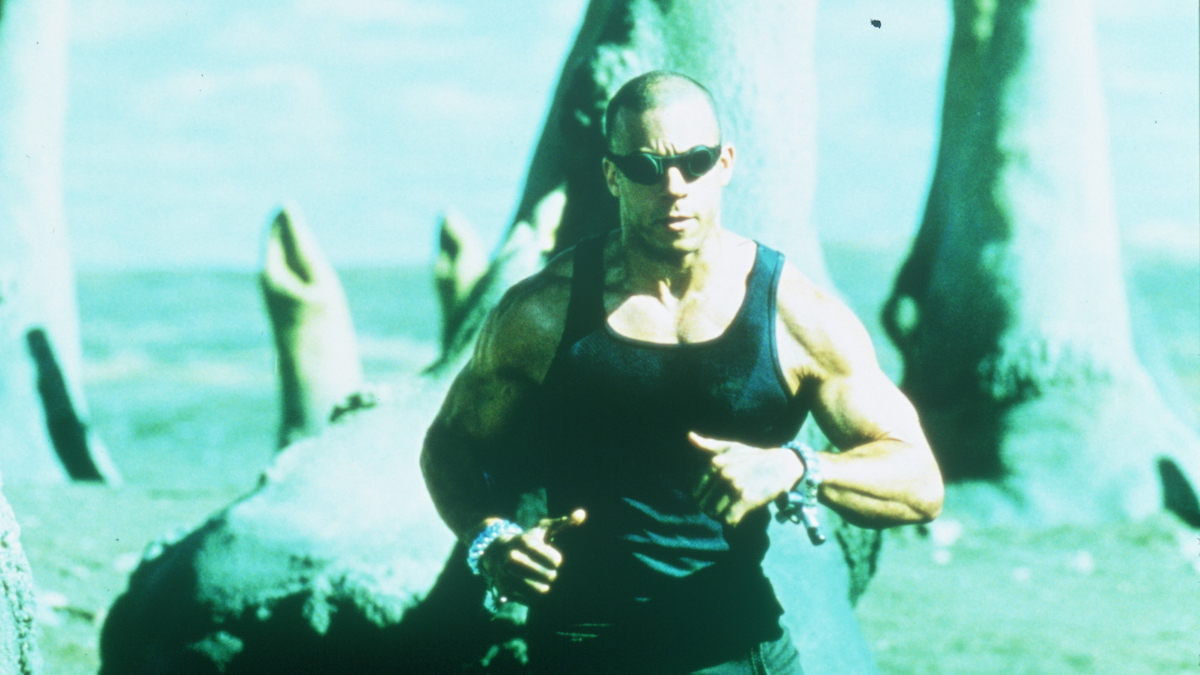 Arrow Video have done it again, with another bumper special edition for a modern cult classic. This time it is for David Twohy’s sci-fi horror Pitch Black, which went on to spawn the lucrative Riddick franchise, as well as launching the career of Vin Diesel. Remastered in stunning 4K ultra high definition, and with hours of exclusive bonus content, this is a definitive release, and one that fans will not want to miss.

The films starts firmly in classic science fiction territory, with the crew of a ship being woken from cryo-stasis, but Twohy gives it a breath-taking twist. In the thrilling opening sequence, a transport ship is struck by asteroid debris, breaching the hull and sending the ship off course. The crew are woken up and set about trying to safely crash land on a nearby desert planet and save the lives of their passengers.

Among the surviving travellers and prospectors are the ship’s pilot Carolyn Fry (Radha Mitchell), a law enforcement officer William Johns (Cole Hauser), and the notorious murderer he is transporting, Richard Riddick (Vin Diesel). Riddick has surgically modified eyes which allow him to see in the dark – a tremendous gift for someone who spends a lot of time in prison.

The group set out to explore their surroundings on this sun-bleached and barren planet, and discover that its twin suns keep it in permanent daylight. But not for long. A solar eclipse is due that will plunge the planet into total darkness. And once darkness falls, all hell will break loose as the planets underground custodians—a race of winged, predatory beasts—pour out of the ground and start hunting the survivors. The only chance Fry and Johns have to lead everyone to safety, yep you guessed it, is Riddick.

Pitch Black is a fun and occasionally very frightening B-movie, but it doesn’t quite capitalise on its fantastic premise. Twohy imbues the film with wonderful visuals, giving it an almost graphic novel sensibility that belies the film’s modest budget. The creature design is very cool, and Vin Diesel delivers a star-making turn as Riddick.

Unfortunately, after the breath-taking opening sequence, and the race against time tension of the first hour as the eclipse gets ever nearer, it stumbles once darkness falls. What should be a heart-pounding, hold-your-breath second act just becomes a procession of disposable characters being, well, disposed of. There’s also quite a heavy reliance on CGI when it comes to the monsters, and in what is an otherwise stunning 4K restoration, the additional crisp definition of the image is somewhat unforgiving.

This release is bursting at the seams with special features. There are two versions of the film, the theatrical release as well as the director’s cut. There are two audio commentaries also, the first featuring David Twohy, Vin Diesel, and Cole Hauser, whilst the second has Twohy again, but this time joined by producer Tom Engelman and visual effects supervisor Peter Chiang.

Nightfall: The Making of Pitch Black is a brand new 23-minute interview with David Twohy, in which he discusses the development and production of Pitch Black. This is a frank and open discussion with lots of great behind the scenes insights.

Also exclusive to this release is the Black Box series of brand-new interviews. Conducted during the coronavirus global lockdown, these audio-only interviews play out over clips from the film, concept art, and behind the scenes footage. The interviews are with actors Rhiana Griffith and Claudia Black, cinematographer David Eggby, visual effects supervisor Peter Chiang, and composer Graeme Revell.

Next up on the disc is the Making of Pitch Black from 2000. This is a short press-kit promo with interviews with the main cast and crew, mixed in with clips from the film and on-set footage. We then get another archival featurette from the 2009 blu-ray release. This Behind the Scenes clip is made up of more interviews with the cast and footage from the production. This is more in-depth than some of the others, with the actors going into greater detail about their characters.

Pitch Black Raw is another piece from the 2009 blu-ray. This short featurette looks at the miniatures and animatics, and compares them with the final versions in the film.

Next we take a delve into the special features from the 2004 Special Edition, which are also collected in this release. These include an introduction from David Twohy, A View into the Dark which is a short promo building up to the forthcoming sequel (The Chronicles of Riddick). Johns’ Chase Log is a short series of animations, providing a sort of prequel to the film, narrated by Cole Hauser. There’s also a Chronicles of Riddick Visual Encyclopedia.

The Chronicles of Riddick: Dark Fury is an animated sequel, bridging the gap between Pitch Black and the sequel. Directed by Peter Chung, this 34-minute short film picks up right where the original ended. This is also accompanied with five featurettes focusing on the making of the film, the advancement of the Riddick mythology, and an interview with Peter Chung.

Now I would never want to criticise a home entertainment label for putting too many special features onto a disc. I love physical media, and the more carefully curated content included on a release, the better, as far as I’m concerned. But Arrow have really added some filler with the next batch of extras.

Beyond the Movie includes Slam City, a motion comic prequel. Then there’s Into Pitch Black, a TV special for the SyFy channel, which is an incredibly cheap looking hour of television to promote Pitch Black. It’s centered around an investigation into the crash that instigates the film. Vin Diesel, good sport that he is, briefly reprises his role. Fair warning, this is utter dross.

Next up is Raveworld: Pitch Black Event, a promo video about the underground raves that took place across America to promote the films theatrical release. If you want to watch 20-minutes of rave footage then this is the content for you.

Finally, the disc is rounded off with six trailers, and a series of image galleries including production stills, concept art, storyboards, and publicity photos. All in all, this is about as comprehensive a release as you could ask for. Twohy’s film is a blast 3-star blast of B-movie fun, but this incredibly packed release from Arrow nudges it up to 4.