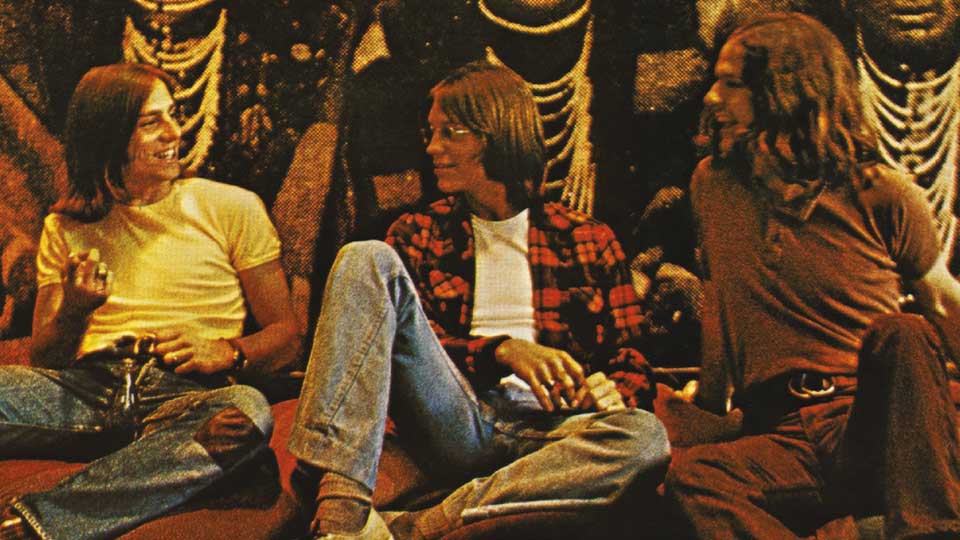 Gerry Beckley, Dewey Bunnell and Dan Peek formed the band America in 1970 when two of them were still in their late teens. Their eponymously-titled debut studio album was released the following year, and they were immediately established as a highly popular and successful folk band. Their acoustic sound captures the spirit and time of the early 1970s, and their soft, soulful vocals and haunting harmonies give them an output a little similar to Simon and Garfunkel, but more rural to their urban. America were a touch more rock than the New York duo, but never as country as Eagles. It’s not easy to pigeonhole their sound, but if you love American popular music of the late Sixties/early Seventies, then there’s a good chance that if America isn’t already on your radar, you’ll love their songs.

Although America is rooted in the music of the US, and their debut album cover pictures them sitting in front of images of Native Americans, and they named their band after the country, the three founding members were to meet in London (Dewey Bunnell was born in Harrogate) whilst their fathers were serving abroad in the US military. Perhaps being outsiders gave them a different perspective of what ‘America’ means, but their music quite quickly began to establish itself as an integral part of a cultural epoch.

Most people will know by far their most famous song, A Horse With No Name, which features on this album. It has been used in countless movie and TV soundtracks, including Breaking Bad. It’s perhaps the strongest and certainly the most identifiable song on the album, with a solid rhythm to draw you in, and a sustained sense of oppressive sultriness. The tautological lyric “the heat was hot” can sometimes be read as a creative weakness, and America certainly isn’t to everybody’s taste. There’s a school of thought among some music critics that the band’s output is unsophisticated, but it takes a fair degree of elitism to dismiss out of hand the incredibly rich and seductively appealing melodies that the trio wrote during a period of high artistic productivity.

America may not be for some high-brow music enthusiasts, but there’s a strong emotional appeal in their songs. I discovered their debut album as a teenager in the 1990s, and it accompanied me on a few road trips as a fledgling when I was stretching my wings. I loved and lived each and every song on this album, and I have never lost my affection for it, though now it has the added layer of nostalgia which bonds it even closer to my heart.

The opening guitar harmonies of Riverside evoke long and lazy summer afternoons and instantly draw the listener in to America’s sound. As a kid, Sandman was my favourite song. I loved the slow intro, eerie Pink Floyd-esque sounds and the sheer drama of the piece. I still get chills enjoying the build into the climax. There’s something of the inventiveness of the Beatles about the fourth track, Children, in the way in which the song evolves. “The days are getting warmer now, The nights are getting shorter now,” are simple lyrics, but rich with haziness. The final track on side one, Here, owes something to the British group too. It’s certainly a strong way to close the first half, using long tracts of inventive instrumental either side of melancholy acoustic verses.

The second side opens with I Need You, which was their second single, and another accessible hit with a simple message that may be a touch saccharine, but is nevertheless attractively packaged. Never Found the Time is one of the highlights, and one of the most introspective of this collection. Donkey Jaw – perhaps ahead of its time, asks us, “Does it take the children, To make a better land?” Calling Greta. There is a touch of fire and brimstone in its message. The album rounds out on an unexpected touch of dark humour – Pigeon Song is told from the perspective of a possible redneck psychopath, who reflects on the death and destruction he leaves in his wake.

Overall, the second side isn’t quite as strong as the first, but the twelve songs coalesce around a strong unifying folk and acoustic sound, full of youthful vigour. Their harmonies and melodies are rightfully celebrated and have found new audiences throughout the half century that has elapsed since they collaborated on this record. Sadly, Dan Peek has died since, but his legacy, and that of America, lives on in their back catalogue. Their debut album – America – will always, I suspect, be a part of my life. This release, pressed onto 1970s orange 180g vinyl, is a fantastic way to rediscover a classic.