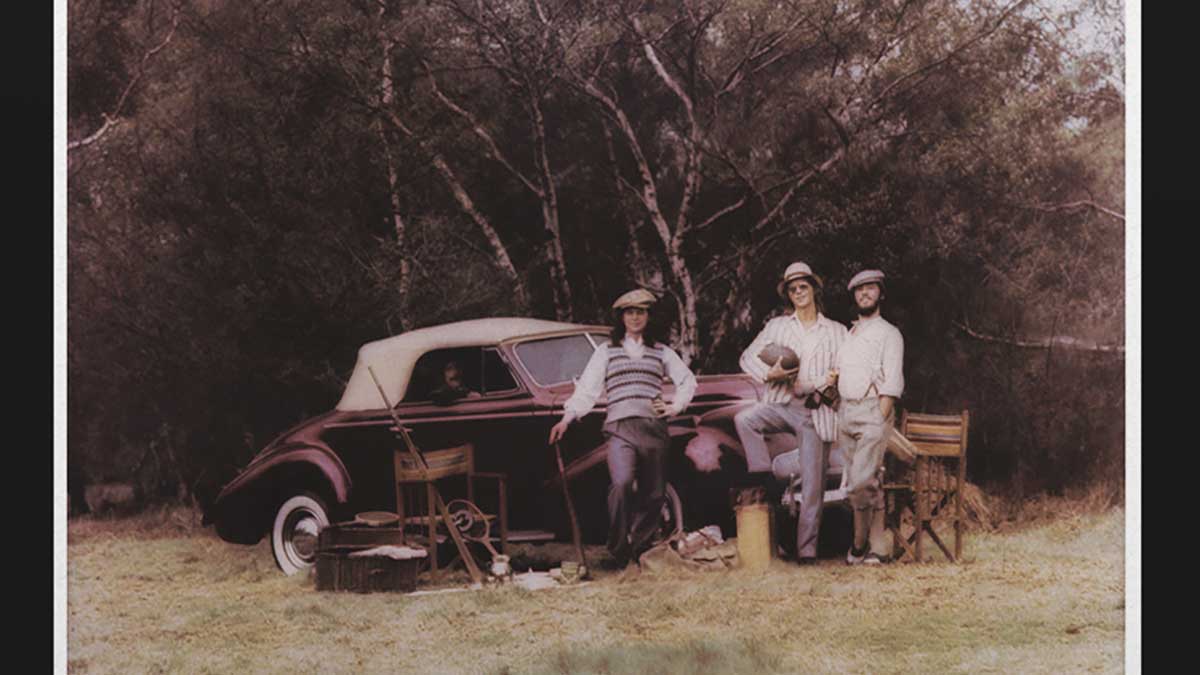 By 1974, America had already established themselves as a leading band in folk rock with hits such as ‘A Horse With No Name’ and ‘Ventura Highway’. ‘Holiday’ was their fourth studio album, and it secured their legacy as timeless songwriters and musicians. It was the first of their albums to be produced by George Martin, who had worked extensively with The Beatles, and his influence can be heard throughout these twelve sumptuous tracks.

The founding members of America, Dewey Bunnell, Gerry Beckley and Dan Peek, were all American citizens with strong connections to the UK. ‘Holiday’ was recorded in London. The end result is a delightful Anglo-American hybrid that is as fresh and captivating now as it was nearly half a century ago.

The album opens with the instrumental ‘Miniature’. The soaring strings lend it a feel of Nick Drake’s folk classic ‘Bryter Layter’, released earlier that decade. It immediately invites the listener into a pastoral landscape. The first track with vocals, ‘Tin Man’, was a single from the album and is rightly regarded as one of the band’s finest songs. It’s also by far the catchiest song on the album – it’ll rattle around in your head for days afterwards, but this is no bad thing! “Oz never did give nothing to the Tin Man, that he didn’t already have” is the sentiment that is explored through gorgeous harmonies. It’s a song I never tire of hearing.

‘Another Try’ brings in a piano accompaniment that undoubtedly evokes both ELO and David Bowie, but with America’s own distinctive transatlantic approach. It’s back to guitars carrying the melody for ‘Lonely People’, another undisputed classic track that has appeared on America’s ‘Greatest Hits’ compilations. The harmonica in the chorus and beyond, and a touch of blues piano combine to create the uplifting “don’t give up” message.

The influence of George Martin can be strongly felt in the instrumentals for ‘Glad to See You’, and there’s more than a touch of the McCartney cheeky/comedy song in ‘Mad Dog’. Though those who enjoy the Beatles influence can hear it most strongly the production of ‘You’ as well as in the dinging bells strategically placed in the closing track ‘In The Country’ on the second side. The latter is an unflinchingly upbeat track with belting vocals – a great way to round out a feel-good album.

There are plenty of other delights to find on the second side before then. It opens with sound effects of traffic – establishing you’ve arrived in ‘Hollywood’, the most cynical track on the album. America, who capture the sound of rural landscapes so well, are perhaps ill at ease within an urban sprawl. Listeners are soon in more familiar territory once again with a trio of classic songs that are distinctively America in tone. ‘It’s Up to You’ has a touch of electric guitar that distinguishes it. Where ‘You’ has an element of withering contempt for how the unseen subject of the song has turned out, ‘Old Man Took’ returns to familiar America territory established in ‘Ventura Highway’: the lyrics recount advice an older man is giving to a younger one. The penultimate track, ‘What Does it Matter’ has a whimsical and rather British feel of music hall meeting a hit stage musical, but it’s a good decision to let the foot-tapping delights of ‘In the Country’ close the album.

There isn’t a weak link in the chain for America’s ‘Holiday’. There’s also arguably a richer variety of musical influences and sounds than the band’s earlier albums had showcased. This period was one of rich creativity for them. Certainly the influence of producer George Martin can be felt, and he has nurtured the talent of exceptional musicians and songwriters to create ‘Holiday’. The end product is an album that doesn’t have the caustic bite of John Lennon (which listeners will celebrate or lament, according to taste), but rather paints a musical landscape that can’t help but cheer up and impress listeners with its vivid palate.

We heartily recommend ‘Holiday’ as a great collection of songs and a delightful dose of 1970s folk rock. On special grey 180g vinyl, and in a Music on Vinyl edition limited to only 1,000 individually numbered copies, ‘Holiday’ has never sounded better. This is the perfect time to rediscover the genius of America.