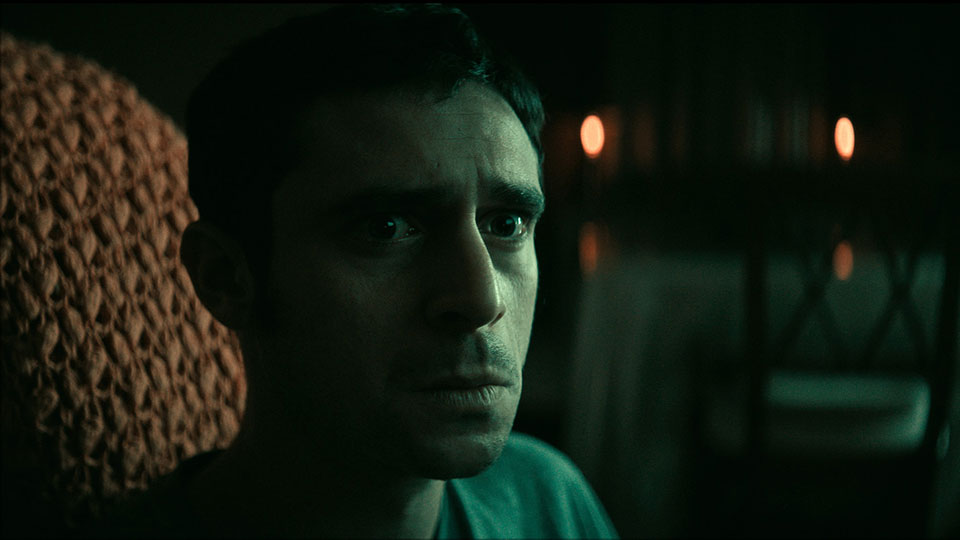 Yakov Ronen (Dave Davis) leaves behind the Orthodox Jewish community he was part of in New York following a tragedy involving his younger brother. Struggling to make ends meet, Yakov is approached by Reb Shulem (Menashe Lustig) who offers his money to act as a shomer – a person who guards a dead body and ensures they remain at peace over night – and he accepts. Taken into the home of Auschwitz survivor Mrs. Litvak (Lynn Cohen), Yakov watches over the body of her husband but soon becomes aware that he’s not alone.

The feature film debut of writer/director Keith Thomas, The Vigil is the latest in a long line of films to mine the connection between religion and horror. Setting it within the Orthodox Jewish community ensures the subject matter is fresh, especially when the central character has shunned his faith. Yakov is reluctant to take the job as a shomer but he does so after bartering the price up from $200 to $400. From the minute he steps into Mrs. Litvak’s home, you know he’s on a slippery slope to a hellish experience.

Firstly Mrs. Litvak is actually pretty terrifying. The elderly woman is battling dementia and has only brief periods of lucidity meaning that Yakov can’t really rely on her for any help or support. Director Thomas makes the most of his modest budget by creating a tense and very creepy atmosphere. He proves adept at increasing the tension slowly and he utilises plenty of jump scares to knock you off guard.

As the night draws in, Yakov is forced to face his personal demons and the literal demon that has attached itself to him. Through flashbacks we learn what happened to Yakov’s brother and why he left his faith. In the present Yakov, and the viewer, struggle to differentiate between reality and fiction, and it’s that struggle that throws the central character headfirst into a nightmare. The use of sound is particularly effective as Yakov is pushed to the brink and the viewer hides behind every cushion they can find.

At the centre of the film is the excellent Dave Davis, who plays Yakov expertly. While we don’t find out a whole lot about the character, you do want him to survive the night and get through the ordeal. Davis is very sympathetic and he’s a mesmerising leading man. The late Lynn Cohen puts in a strong performance too, veering from helpless old lady to terrifying widow as she moves around the house, popping up when you least expect it.

The Vigil is an atmospheric and intense watch. It’s by no means a perfect film, sometimes getting a little too bogged down in exactly what it is Yakov is battling, but it’ll definitely have you on the edge of your seat. It’ll also ensure you make note of Dave Davis, who is clearly an actor to keep an eye on. The Vigil is a solid debut for Keith Thomas and it should satisfy those horror fans starved of new films the past few months.