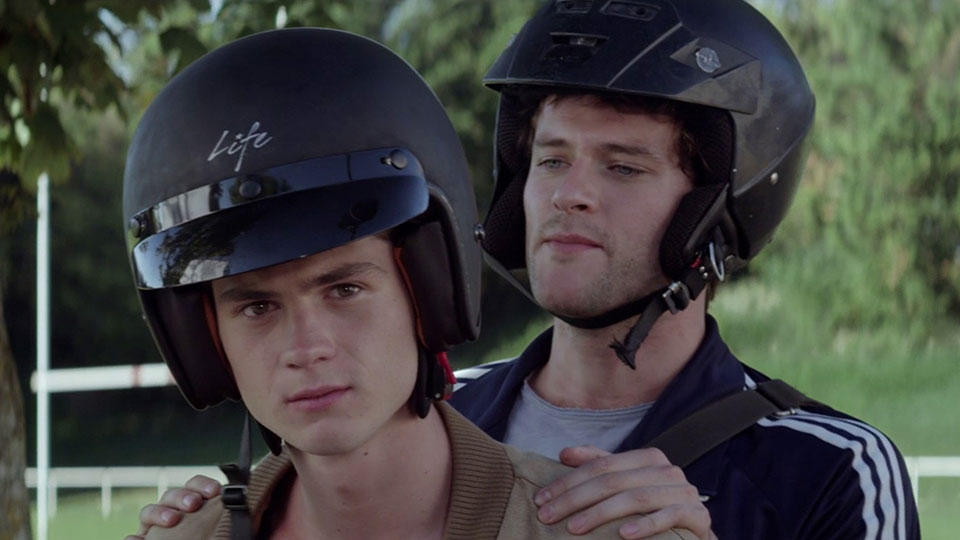 The third instalment in NQV Media’s The Male Gaze series, Strikers & Defenders pulls together four shorts with a football theme. The shorts – Islands, Play It Like a Man, Colours and Through the Fields – hail from Germany, France and the UK and they each tell very different stories about young men trying to be themselves amidst resistance and intolerance from those around them.

Islands by German film-maker Ron Jäger is the first short of the collection, and it takes place in a school where Theo is picked on by his classmates on the football team for his sexuality. Conducting a secret relationship with a classmate, Theo struggles to deal with the abuse he receives, both physical and verbal, and unexpectedly finds himself confiding in his P.E. teacher, who has a story of his own to share. It’s a touching short that shows how different generations can connect and it highlights that everyone can find support from somewhere, even if they feel completely helpless.

The darker Play It Like a Man from French film-maker Laurent Lunetta follows. Loris (Simon Boutin) steals his football coaches phone and after looking through it with a friend, finds naked photos of himself in the locker room showers in the image library. Convincing his friend to come with him, Loris arrives at the house of his teacher and breaks in, determined to teach him a lesson. The tone is quite the shift from the first short, and it’s never 100% clear what Loris’ motive is (other than anger) but the short is compelling. The end leaves you wanting more and it’s quite unexpected.

UK film-maker Peter Lee Scott’s Colours is the third short, and it’s an exploration of homophobia among a group of friends that play football together. Adam (Harry Jarvis) discovers that his friend Tom (Makir Ahmed) is gay and he’s torn between feeling hurt that his friend didn’t tell him and playing along with the group bully Mike (George Somner) who has an anger issue. With Mike determined to make Tom’s life a nightmare, Adam has to pick which side he’s on. Colours shows the scarier side of homophobia with Mike being a completely unhinged character whose first instinct is to violently attack his friends for being different rather than support them. It’s a sobering short that packs an important message, as well as highlighting what young closeted gay men go through.

The final short on the collection is Through the Fields from French film-makers Fabien Cavacas, Camille Melvil. Focusing on football player Lucas (Maxime Taffanel) and his gay teenage brother Theo (Pierre Prieur), the short explores a close brotherly relationship. Lucas knows his brother is gay and allows him to be who he wants to be, but he’s fiercely protective. As Lucas starts to yearn for intimacy, he sets his sights on one of Lucas’ friends but when he’s rebuffed he meets a man he’s been chatting to on the Internet. Through the Fields is the standout on this release and it’s emphasises the importance of family and not rushing into situations.

The Male Gaze: Strikers & Defenders is the best release in the series yet. All four of the shorts are brilliant and they each give a completely different look at what it’s like to be a gay teenager. Together they work well as a package but individually they’re all very strong. Gay audiences will love this release and straight viewers may find they learn something new about what gay men go through.