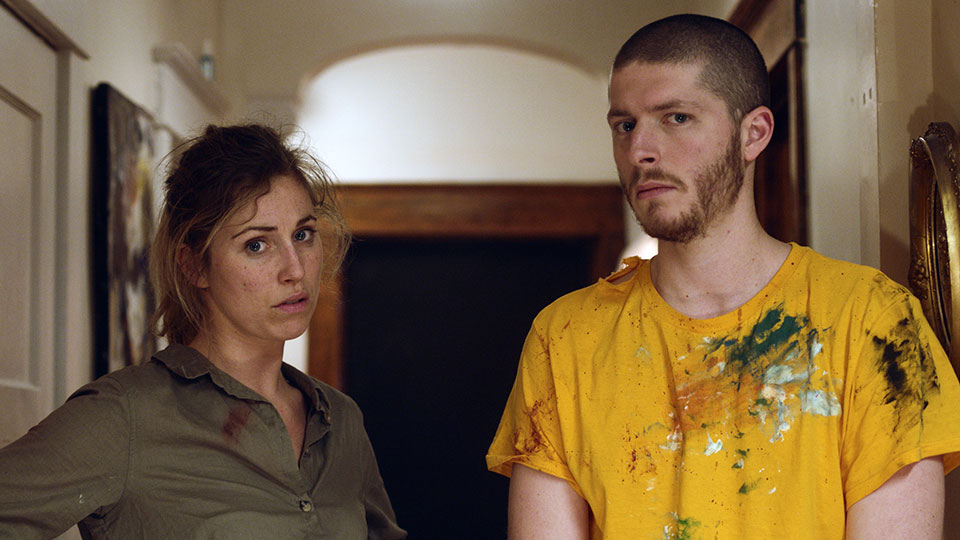 Becca (Jillian Harris) is excited when she gets accepted onto a nursing programme but she’s worried that having to move to another part of the country will leave her mentally ill brother Richie (Heston Horwin) alone. During a shift at the bar she works at, Becca receives a worrying call from Richie and she rushes to his apartment, where she’s confronted by angry neighbour Matt (Matt Keyes) who is fed up of the noise Richie is making. Letting herself into the apartment, Becca is devastated to find Richie dead in the closet but she quickly learns that Richie isn’t dead at all…

Dead Dicks is a clever sci-fi film that delivers something I’ve genuinely never seen before. The premise seems bleak but the film finds plenty of humour, especially in the relationship between Richie and Becca. Following her initial shock at finding her brother hung, Becca is relieved, and disturbed, when he interrupts her grieving completely naked and eating a bowl of cereal. Confused about what’s going on, Becca learns that Richie has been trying to kill himself but every time he does, he’s reborn through a vagina-like hole in his bedroom.

Now it’s safe to say that Dead Dicks is a little bonkers but it’s also a clever exploration of mental illness. Richie feels like he’s stuck in a never-ending loop, putting too much pressure on his sister and existing in perpetual misery. The idea that killing himself can’t even free him from his demons is an interesting one. Becca gets drawn into the mess, having to help Richie dispose of his own bodies from previous failed suicide attempts and the brother/sister duo try to stop angry neighbour Matt from finding out what’s going on.

One of the aspects of Dead Dicks I liked is that it actually does show the impact that mental illness has on those around the person struggling too. Becca’s life is pretty much ruled by her brother and she’s scared that leaving him will result in him having a rapid decline. She’s both concerned for her brother and resentful of him, because he’s preventing her from being able to do what she wants with her life. Richie on the other hand isn’t oblivious to how his behaviour impacts his sister, and that’s part of the reason why he’s so keen to off himself.

With any film that relies on limited settings and characters, Dead Dicks falls on the shoulders of Heston Horwin and Jillian Harris. They are both excellent and very convincing as brother and sister. Early on they establish an easy chemistry and the dialogue between them is sparky. Horwin proves adept in the more comedic moments of the script while Harris really shines in the more emotional moments.

Dead Dicks isn’t a perfect film but it’s so full of ideas that you won’t be bored watching it. Film-makers Chris Bavota and Lee Paula Springer have clearly watched plenty of David Cronenberg and David Lynch in their time, and I feel both directors would be proud of this clever homage to their work. Dead Dicks is a truly intriguing and enjoyable film with a few scary moments and plenty of laughs too.