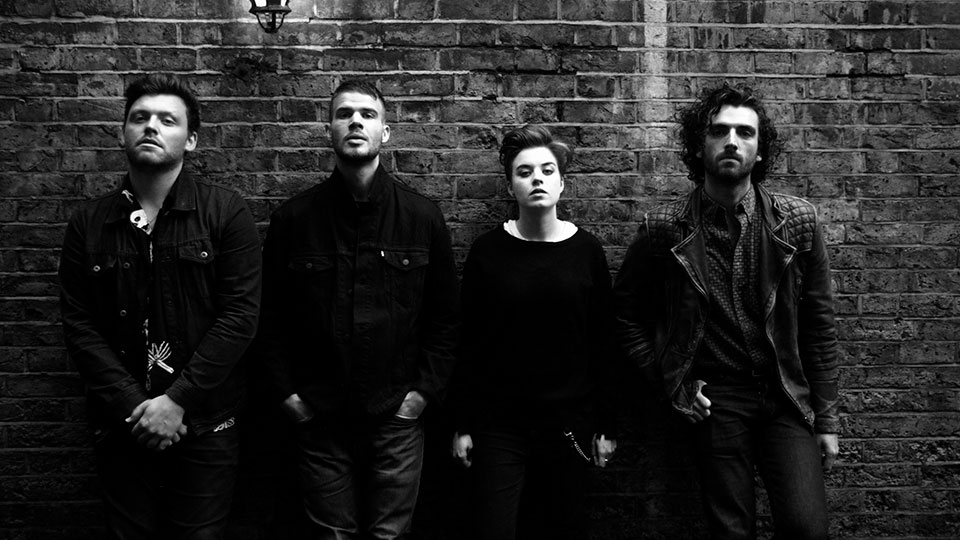 The band – lead vocalist Scott Viney, lead guitarist Arthur McBain, drummer Poppy Kavanagh and bassist Pierce Kavanagh – has an EP on the way, which will be the follow-up to 2019 releases Afterlife and Coward. Midnight Mouth’s new music was recorded while in lockdown and Feel Better is the first taste for fans.

I caught up with Arthur, whom I spoke to earlier in the year about his hit TV show The Trouble With Maggie Cole, to talk about Feel Better, discuss the challenges of making music in lockdown and to find out where the band’s sound comes from…

The song was written by Scott Viney, the lead singer of the band. The story goes that he wrote it on, I think it was the 333 bus from Brixton to Streatham Hill, because he’d had a really, really, really rubbish day and was in a pretty bad place at the time. He was on the bus on the way home and it suddenly occurred to him in that moment, it was only him that could make himself feel better. It’s about doing the things that you love in order to just help yourself feel better. For Scott that just happens to be writing music. He loves it and it’s his happy place. In that moment, he made himself feel better by writing Feel Better (laughs).

It’s a timely message given what’s going on. When we last spoke, we were at the very start of this and I think it was new and a bit weird. Now it just feels like everyday life and I think people are getting fatigued and starting to feel a bit down and miserable. Why did you choose this song to release now?

We’re releasing three singles this year and this is the first one of the three. This track was never discussed as to whether or not we’d do it. It just seemed obvious that this was the song that we were going to release first this year. It happened sort of subconsciously really. The difficulty came when we got to recording it, which we’ve done completely in lockdown. Before the Coronavirus stuff all kicked in, we had studio time booked in a really good recording studio in London and we were putting aside some budget for that to go into the studio and record all properly. We booked it all and then and then lockdown happened. We realised that being stuck in a small sweaty room with no windows probably be the worst place to be. We had to start thinking about how we were going to do it. We all set up home recording studios and sent it to Poppy, our drummer who has produced the new single, and it’s remarkable. We’ve had our ups and downs in lockdown trying to record this but the good news is that it’s kept us all occupied.

This experience has shown that you potentially don’t need to use a recording studio in the future but what challenges did recording during lockdown present?

Well, the first thing that is really helpful is Poppy, our drummer and our producer for this single, is an Emmy-nominated music editor. She was nominated for an Emmy last year for her work on the music editing for the Michael Jackson documentary Leaving Neverland. We’re really lucky that she just so happens to be our drummer (laughs). It means that we’ve essentially got one of the world’s best working on our music. She can make anything sound brilliant. I record a podcast from home so I’ve got a good mic and Poppy sent a microphone to Scott. It was quite difficult to set it all up but once we’d actually recorded the tracks, it all came together pretty easily so we didn’t have to do any retakes or anything.

This song, Feel Better, was the first song that we played together as a band so we’ve been playing it for over a year now and we know it really, really well. We didn’t really have to work anything out, it just seemed natural that that’s what would happen. I had my guitar parts that I play and I recorded them and sent them to it, but then I also sent about five different tracks of other ideas I had of weird guitar effects and things. Lots of them ended up in the final product, which we’ve never come up with had I not had the luxury of being at home and being relaxed enough to just play, and also the luxury of time. Obviously, I’m not paying for my studio time when I’m in my living room. But the neighbours did complain (laughs). They knocked on my door and said, “look, what you’re playing is really, really nice but this is the hundredth time you’ve played it today. Can you please just decide on a take and stop playing the same riff over and over again?’ (laughs)

It must be quite challenging promoting music as a band right now. Are you having to get creative?

Yes, we are. We’re all taking it in turns to do Instagram lives concerts on Thursday nights. It has been challenging not being able to book in a series of gigs because that would be the the most obvious thing to do, and that’s the thing that we love doing the most. The original plan was booking in a lovely big series of gigs and get everyone down and give away free gifts and stuff. We’ve had to be a little bit more inventive. We did a big promotional boost about a month ago where if people signed up to our mailing list then they got a free t shirt. We’re just having to make lots of friends online and then hope that when all this is over, those fans can be friends in real life as well.

Feel Better has a very 90s feel and it reminds me of Feeder in places. How did you hone your sound and what influenced it?

We’re all children of the 90s. The 90s/early noughties… that’s when our music tastes were being made. That’s the most obvious reason why it sounds a bit retro. Would you call it retro. Now I suppose you would retro back to the 90s that sort of thing. We’re all fans of that kind of music. I’m a really big fan of Modest Mouse and particularly when Johnny Marr played with them. I really liked his lead guitar parts. There’s lots of influence from him for me and then we take influences from Pink Floyd for the wide atmospheric sound of it. We’ve been compared to early Coldplay, that’s been thrown around a lot. Our sound is just what we like. We all have slightly different tastes within the band. Poppy is a huge hip-hop fan so she brings some of that into the rehearsal room and we just tinker around on things really until they work.

My job in the band as a lead guitarist isn’t really about playing riffs. We all agree that my part is more about providing the atmosphere and the soundscape and the background. The place where all the music starts for us is the lyrics. Scott writes immensely good lyrics. I don’t know anyone else personally, who writes lyrics as easily and as creatively as Scott does. It’s just the way that he speaks to the world, is through lyrics. All the songs start there. It always comes back to the words, which is very interesting because you can get very swept away in a rock band on the sounds and the riffs and the groove. But for us, we keep bringing it back to the words. In the run up to this release we’ve been preparing little teasers where we’ve dropped some of the lyrics out on social media. I think that the lyrics dictate the sound rather than the other way around.

You’re not gonna get a straight answer for this (laughs). I wasn’t there when the name was decided. The only person who was there was Scott, our lead singer, and he just came up with the name one night. It just popped into his head and he wrote it down in his phone. He’s had the name since he was a teenager. And He was originally a solo artist playing lots of these songs that we play now as a band, under the name Midnight Mouth. However, there’s lots of different interpretations about what Midnight Mouth means to him, and he’s never really told us (laughs). Every time that someone’s asked he’s given a different reason.

It would be remiss of me not to ask you about The Trouble With Maggie Cole, the show you starred in opposite Dawn French for ITV. That’s what we originally connected on and that show was such a huge hit. What was your experience with it?

My experience was great. I had a wonderful time on that job. I look back on it very fondly, although it’s not quite over yet. It’s currently being aired in Australia, which is very nice. I did a TV show in Australia a couple of years ago called Friday on my Mind so it’s quite nice that the people who I knew on that job are able to watch it over. I’ve had a couple of nice messages from people who have seen it by chance. I’s going to be out in America as well. The overall experience was just great. I look back on living in Plymouth very fondly. At the moment during lockdown, I have just been dreaming of going back to Plymouth because it just seems so idyllic compared to being in lockdown in London. The show got a lot of love and I’ve had really lovely feedback about it.