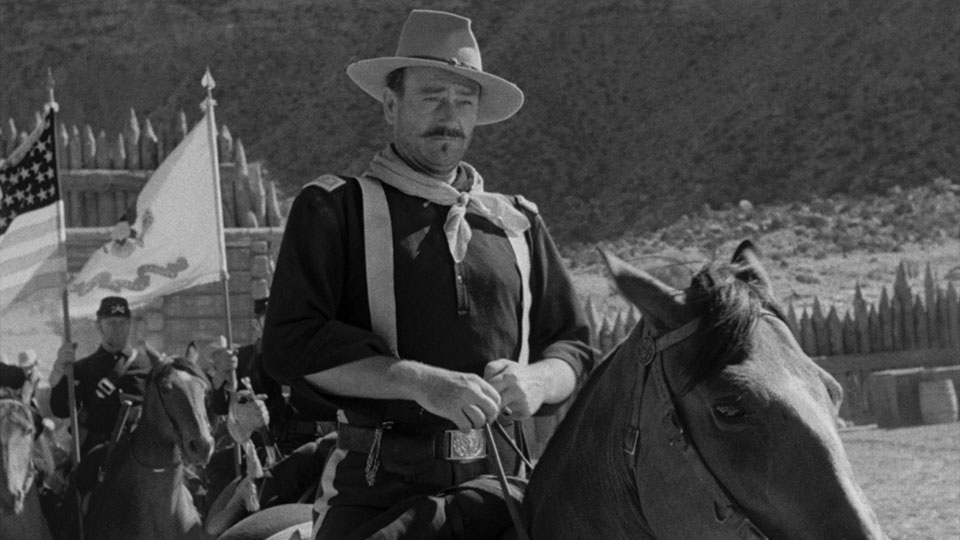 Eureka Entertainment to release Rio Grande, John Ford’s intelligent and entertaining final instalment of the “Cavalry Trilogy”, starring John Wayne and Maureen O’Hara. It’s available now for the first time on Blu-ray in the UK as part of The Masters of Cinema Series, featuring a Limited Edition O-Card Slipcase (First Print Run of 2000 units only].

Perhaps one of the most underrated of the collaborations between director John Ford and star John Wayne, Rio Grande manages to be both a conclusion and a new beginning for this most iconic of actor-filmmaker collaborators. The film is the final entry in Ford and Wayne’s “Cavalry Trilogy,” following their hits Fort Apache (1948) and She Wore a Yellow Ribbon (1949). Yet it also marks the first of five appearances Wayne made with actress Maureen O’Hara, three of which were directed by Ford.

Wayne is Lt. Col. Kirby Yorke, attached to the Texas frontier in 1879 to protect settlers from attacks by Apaches. When Yorke’s son – a West Point flunkee turned Army private – is assigned to his father’s regiment, tensions flare upon the arrival of Yorke’s estranged wife Kathleen (O’Hara), who wants their teenaged son out of Yorke’s unit. After Apaches attack, the stakes of Yorke’s mission escalate, and he must journey to Mexico where the Apaches are hiding out. With his son and two old recruits (Ford/Wayne regulars Ben Johnson and Harry Carey Jr.) as accompaniment, Yorke faces his toughest battle.

The Quiet Man (1952) may be the most fondly remembered collaboration between Ford, Wayne, and O’Hara, but ironically, that classic wouldn’t even exist if not for Rio Grande, as studio Republic was so (incorrectly!) certain that the later film would lose money, that they only agreed to its production on the condition that Ford and his collaborators make another western first to cover the costs. But Rio Grande stands on its own as yet another outstanding meeting of these remarkable talents.

Rio Grande, John Ford’s intelligent and entertaining final instalment of the “Cavalry Trilogy”, is out now on Blu-ray and can be purchased here https://bit.ly/2U97nbT.

To celebrate the release, we’ve got 3 copies of Rio Grande on Blu-ray to give away. For a chance to win, enter below…

In this article:Eureka Entertainment, Rio Grande