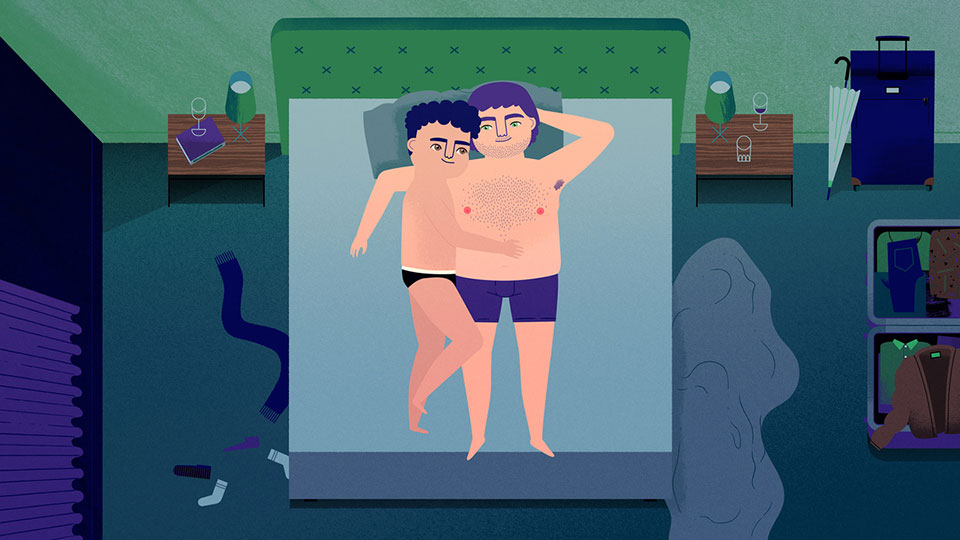 Anton (Eric Ernerstedt) falls in love with David (Jonas Jonsson), a student who is a couple of years younger than him. Living his life by lists, Anton finds his world changing as he embarks on a globe-trotting adventure with David and the couple’s relationship starts to take off. After the honeymoon period, Anton begins to worry that he and David don’t have the future together that he’d initially thought and we see their relationship play out over the duration of 45 minutes.

Before I dig into the storyline, it has to be said that the animation in Top 3 is incredible. The film has such a unique and distinctive visual style that it’s impossible not to be pulled into Anton and David’s worlds. It’s quirky, colourful and a million miles away from the perfect CGI that the likes of Pixar churn out with every movie but that’s what makes it so eye-catching and captivating.

The story at the heart of Top 3 is a simple, and relatable, one. It captures the course of young love and the challenges that come with it. Anton is a homebody, keen to stay put in Sweden while David has a passion for travel and isn’t planning to settle in one place. That divide causes friction between the couple but both try to change for the other. Of course, everyone knows that changing for someone else rarely ends well and we watch that painful, and often comedic, situation play out.

Something else the film gets so right is the insecurities and second guessing that lies at the heart of every young romance. Anton is constantly questioning his relationship with David, while the younger David wants to just go with the flow. Initially Anton is happy to follow David wherever he wants to go but that soon becomes wearisome for him and signals problems for their relationship.

Top 3 beautifully combines the realism of a young relationship with wonderful moments of comedic relief and it’s quite unlike anything you’ll have seen before. The film is short and there’s not much more to it than I’ve outlined, but it’s so beautifully made that you won’t care. Anton and David are well-rounded characters and the storyline crafted by Simon Österhof is unflinchingly honest and compelling. Given that we’re all on lockdown for the foreseeable, I’d recommend you get your hands on a copy of Top 3 as soon as you can.