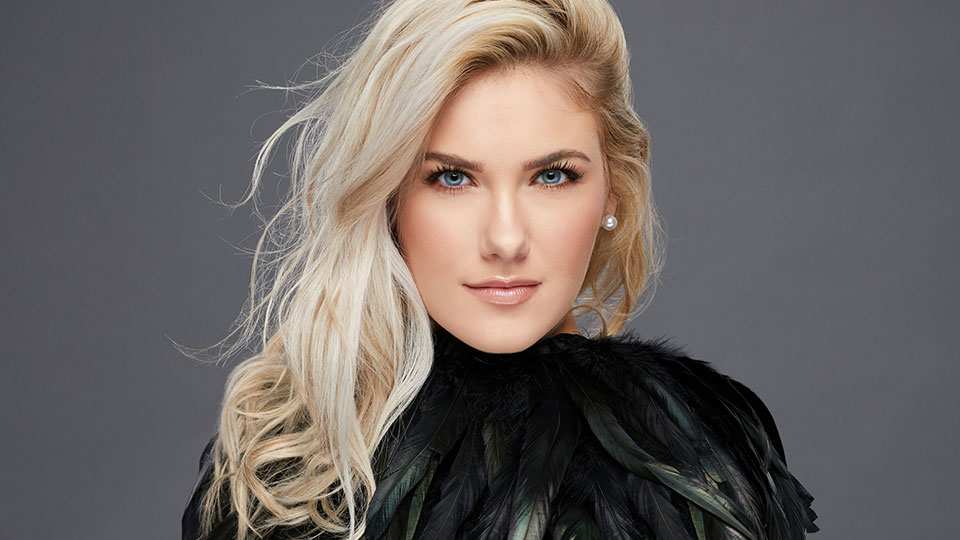 Originally from a small town in Virginia, Baker stepped into the breach following the cancellation of the C2C: Country to Country festival last week, where she performed at short notice to a packed All Bar One, alongside King Calaway. She won over the crowd with her rock-influenced style and fantastic storytelling and it’s safe to say she’ll be an artist many fans are looking forward to seeing again – which you can do on Destination Country on Thursday 26th March, when she plays the first ‘Live In Your Living Room’ show.

Ahead of Kaitlyn’s debut London performance, I sat down with her to talk about how she approaches her songwriting, what she’s learned from touring over the years and her plans for 2020.

Hi Kaitlyn! How have you been finding your trip over to the UK?

It is awesome. I love it.

What’s the reaction from the fans here been like? Has there been anything that’s surprised you at all?

Just the overwhelming amount of messages that I’m received online has been really crazy. We’re just really excited that we were able to put this show on tonight.

So I’m from a small town in Virginia, it’s called Pound, and I grew up around a lot of bluegrass music pretty much my whole life. But I also grew up listening to old rock and roll music. So I feel like there’s just a combination of a rootsy sound but also there’s flairs of modern sounds in there as well. I almost like to think it’s kind of like a cross between Miranda Lambert and Carly Pearce, in a way? [laughs]

One thing which really stood out to me about your music is the stories and the characters in your songs. Can you tell us a bit more about the inspiration behind those?

You co-wrote all the songs on your most recent EP, Blackbird. Do you have a typical songwriting process?

Oh my gosh. It just always varies. I think everybody is different when it comes to songwriting. Y’know, I can never really think of a time that’s been the same. But Nashville’s such a cool place. It’s known for its songwriting and just the people that have such creative minds. So every time I get in the writing room it’s just interesting to see the different mindset and the different type of people you can draw inspiration from and get into a room and write with. It’s never really the same but I will say most of the time it comes from some kind of story that you just can never really explain to people until you just sit down and put it in a song, and it just comes alive. It’s amazing.

Do you ever get writer’s block or anything like that?

Yes! [laughs] I totally do! I totally get writer’s block. So I actually had my gall bladder removed at the beginning of this year, so I took a couple of months off [laughs]. So I definitely wasn’t writing any music or anything. But I think, y’know, it just comes and goes. It’s just one of those things.

You’ve got plans to come back to the UK a lot this year – Buckle & Boots, touring with Jade Helliwell – so what can people coming to those shows expect?

A rocking good time! You’re gonna hear a lot of good country stories from where I’m from, stories about my family, and some just good country music.

Y’know, I think the biggest thing that I’ve taken away from, especially being able to tour with other artists or even being able to open for somebody, is the fact that everybody is different and you take away something from every new show that you see. So I’ve tried to listen and learn and be able to take that, and put that in a part of my show in some way or another.

Oh my goodness! I have a lot of people ask me this and it’s so hard. Ummm… I am such a huge Vince Gill fan, and I have adored him since I was a child. So really I can’t name a specific song, but really anything that Vince Gill has written, I absolutely adore. I’m not gonna give you a specific one, but I will say something Vince Gill [laughs].

What’s in the pipeline for you over the next few months? Obviously you’ve got the tours planned here in the UK and I know you just got engaged as well – congratulations on that…

I know, thank you! Gosh, we’re touring in the US, we’re gonna be touring here in the UK, I’m getting married like you said. My sister actually just had a baby a month and a half ago so I’m living the aunt life right now. So just so much stuff between my personal life and also music, so I’m excited to put the new stuff out and be touring.

Is the new stuff going to be similar to Blackbird? Or will it be a different direction?

It’s gonna be somewhat similar but I think it is gonna have more of a different feel, so I’m really excited about that. I think the fans are really gonna enjoy it a lot.

Are there any plans for an album? Or maybe an EP?

No announcement of an album, not just yet. We are in the studio, so I have no date or anything like that right now, but I am very excited to be putting new music out soon.

Kaitlyn will be performing as part of Destination Country ‘Live In Your Living Room’ on 26 March at 9pm. Find out more and get tickets here.

See Kaitlyn live on tour in the UK later this year: