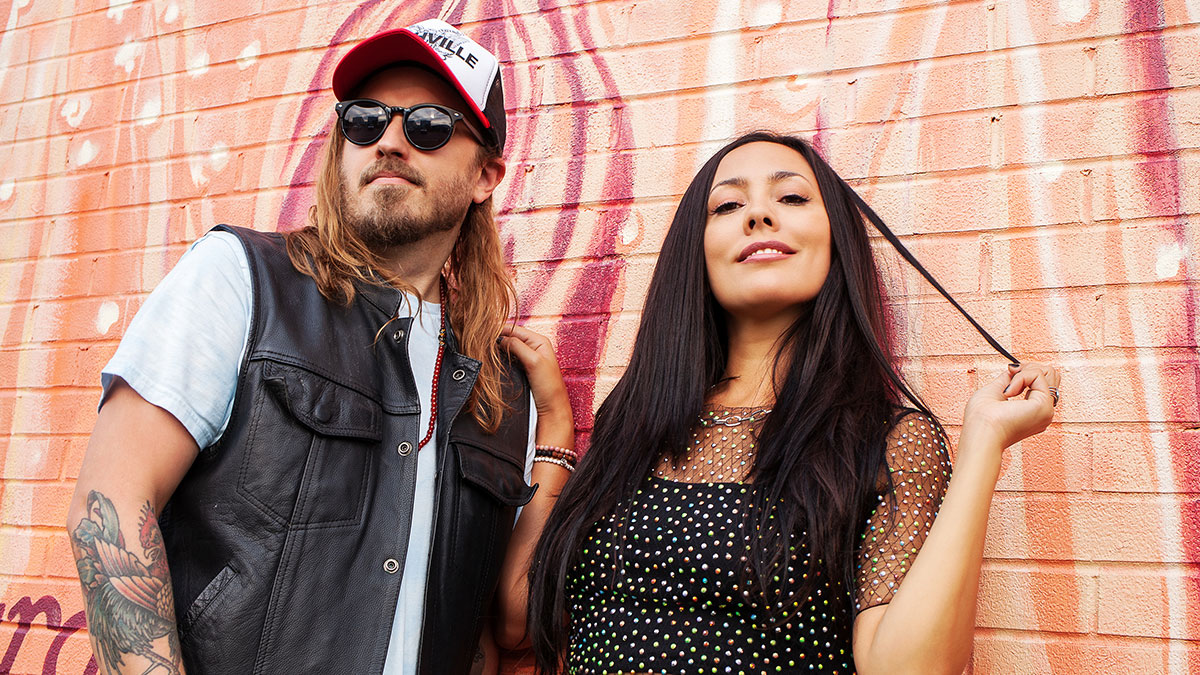 Canadian duo Sons of Daughters relocated to Nashville to pursue their dreams of a career in Country music.

The duo – Chrystal Leigh and Jimmy Thow – released their EP ‘Love In A Bar’ in 2019 and their latest single ‘Drinks Well With Others’, has been picking up plenty of traction. On 28th February, Sons of Daughters will be supporting Tebey for his show with Destination Country, which also includes support from Matt Lang.

I caught up with Chrystal and Jimmy to find out more about them, talk about the inspiration behind their latest single, and to discuss how they’ve been staying creative during the pandemic…

Your single ‘Drinks Well With Others’ is out now. Tell me about that track and the inspiration behind it…

Chrystal: Jimmy and I both live in Nashville but we’re both from Canada. When the pandemic hit in March, I ended up going back to Canada so we were in separate countries. At the very beginning of this, we had no idea how long we would be separated for. After a month of being in different countries we were like, ‘you know what? This doesn’t look like it’s going to end anytime soon. Let’s just get back to our writing schedule’. That’s when Zoom writes were becoming the norm and what everyone was doing on a daily basis. We wrote this song remotely from different countries and with a good friend of ours here in Nashville. We just wanted to write something that was fun because at this point, everyone was just in this transition from society to lockdown. We wanted to write something that was upbeat, something that spoke to us and we tend to write a lot about drinking (laughs).

Jimmy: It’s a universal song. Not everybody’s gonna be an Elon Musk right? You can celebrate the little things. You can be life of the party and have a good time, and there’s something to be celebrated in that.

What was your experience like writing together remotely via Zoom?

Jimmy: I know people are torn on this but for me I look at it as, you lose the personal touch. A lot of the time after a write in Nashville, you go for lunch or go for a Margarita to get to know people so you lose that social element. I like getting out of my element, getting out of where I live and going down to Music Row and getting in the thick of it. You just meet people in the hallways and it’s a cool part of it. The other side of it is that sometimes you can’t write with people (because of the distance), if we wanted to write with somebody on your side of the world we could do that now. We don’t have to get on a plane. It’s opened up a lot of stuff too.

Chrystal: Yeah, I find Zoom has done that. It’s opened up the the writing world all across the world. We can write with people in LA now and people in Europe and people on the other side of the country. We noticed that too with radio tours. When we released this song and then we were going to radio, we found that we met way more programme directors and radio hosts because we don’t actually have to be on the road. Zoom rights, I feel like we transitioned pretty naturally. I don’t think we found Zoom writing that difficult.

Jimmy: You can’t step on each other’s toes as much. You can’t yell over each other because it just doesn’t work. You have to be like, ‘I have a point. Can I say?’ and then you say your point. It’s very back to grade school. People have to have manners.

Chrystal: Zoom is teaching manners for sure (laughs).

How did you find the move from Canada to Nashville? Was that a big transition for you?

Chrystal: I think we were just so excited to move. We didn’t have any second thoughts about it. We came down to Nashville in the summer of 2015 just for a writing trip. We had a cheerleader for us back home that opened a bunch of doors for us. I remember, we were only here for about 30 days and we wrote something like 30 songs, which was about the same amount of songs we’d written in the year we’ve been together. It was just so mind blowing. The amount and calibre of talent on an artistry and songwriting level was just completely mind-blowing. When we went back home, I think we were back in Canada for not even six months, and we got asked by our management if we would consider moving to Nashville, and we were like, ‘we’ll move today’. I think culturally America and Canada are quite different. There’s a lot of differences. There’s some transitions you have to go through like the medical standpoint because the medical system is so different and people have guns; those are big issues that are very different in Canada. There’s definitely some social things that were different but on a career standpoint, musically speaking, it just for me personally, it just expedited the process. Jimmy will say that coming to Nashville is like going to a musical university.

Chrystal: I don’t know! What are we doing?

Jimmy: Right now we’re putting out singles. What happens usually is you hit a hit three or four and then you go, ‘OK, let’s package this up and maybe we’ll need a couple more songs so we’ll throw a few in there so there’s something on there that people haven’t heard’. I think we’ll always be working towards some sort of package but right now we’re in the single phase.

What has the reaction from fans to your latest music been like?

Jimmy: I think it’s a little bit of a an escape for people. It takes you back to a time where you could just get up on Friday and go to a house party and drink with your friends. I think a lot of people took that for granted but it’s a bit of a throwback to how that was and what that felt like. We’re all kind of hoping we can do that again sooner than later.

Chrystal: The reaction has been really great. We’ve been getting comments from people saying, ‘this is what we need. We just needed something that we can put on, that we can dance to and drink to’. Our (‘Drinks Well With Others’) shirts have have been doing really well (laughs).

I saw those on social media. They’re everywhere!

Chrystal: It’s been great. Our community and having our colleagues and other artists wearing our shirt and having something funny to say about it – why they drink well with others – and just bringing a bit of a lightness and joy to a hard time.

I feel like you would go down a storm here in the UK. Do you have plans to get over here when that’s possible?

Jimmy: Yeah, we’ve been talking about coming over there forever. We would love to do that. We’ve been inspired by Tebey. He’s always told me that every time he goes over there, he meets a bunch of new people and it’s such a great experience, and they love Country music. We want to definitely get over for all the reasons to come and see the UK but also to experience how Country music goes over, up-close and personal.

It’s hard to make plans for the year when we have no idea how it’s going to pan out but what are you hoping to achieve in the rest of 2021?

Chrystal: Jimmy and I are always writing and always releasing. It is difficult this year. We would love to get back on stage. We had all our shows cancelled in 2020 and I’m sad to say that we’re watching some of them fall off the schedule for 2021. Until then, we’re continuing to do this, stay in the scene and continuing to meet people, and just keeping writing and releasing.

Jimmy: We’re taking the time to use it as a chance to create and to discover new things, and discover what else is in our toolbox that we haven’t been using as a band. We’re trying some new stuff with production and we’re trying some new stuff with lyrics and melodies. We’re just trying to take it to the next level so that when things get going in terms of shows that we’ve got some new songs and we’ve one-upped ourselves, and maybe not just spent this whole time waiting for the stage to come back.

Sons of Daughters’ single ‘Drinks Well With Others’ is available to stream and download now. Watch the music video below:

In this article:Destination Country, Featured, Sons of Daughters, Tebey