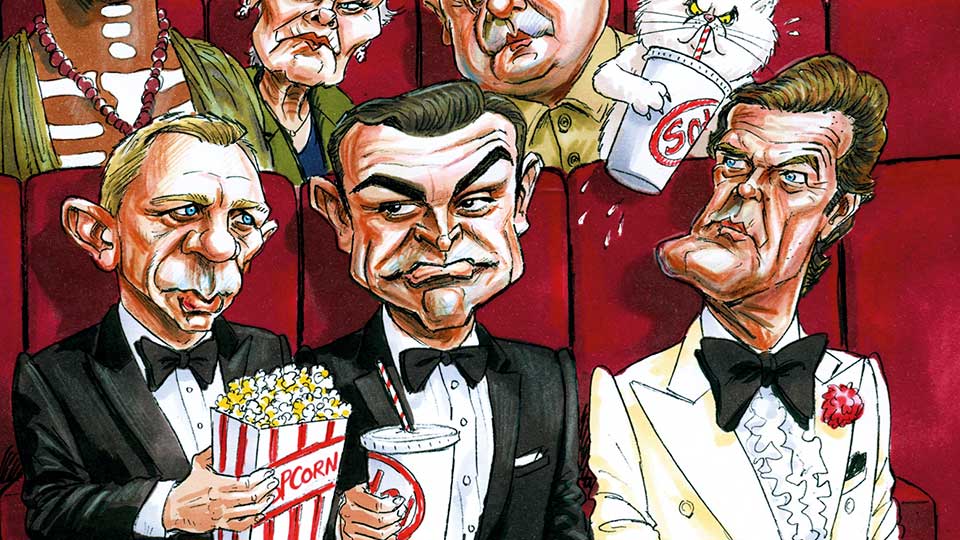 The author of all your pain’s introduction to this short, humorous, light-hearted take on the world of the James Bond movies sums it up perfectly. If you know who Desmond Llewelyn is, the names of all the villains and you have a working idea about the plot of each film, you’ll fit right in. If you’ve only seen a handful of Bond flicks but “quite liked the one where Jaws found love in space”, then the in-jokes and niche puns will be completely lost on you. This is one for the devotees.

Quantum of Silliness, as the title suggests, finds the author throwing every pun he can find at the franchise in a scattergun approach – firing them off and seeing what sticks. If you love 007 and you love puns, then this is the book for you. If you’re unsure about puns, fear not, Sims wears you into submission by the end. At page fifty I was rolling my eyes and groaning, and by the end of the book I was chuckling away to myself. This is a short read, weighing in at only 160 pages, but on most pages there’s not much more than a few sentences of text.

So what’s it all about? Sims invents some recurring themes. He runs through alternative titles for all of the films, some of which are jokes so utterly terrible they’re actually quite funny. There’s Elliot Carver’s fake news files, which were often my favourite parts, as the author gives free rein to his imagination and creates an amusing ‘alternative universe’ of Bond, some of which is rather appealing. There are ‘classic Bond quotes’ – famous lines given an overly-literal spin, thoughts from the Cubby hole, and limericks and haikus that breathe new life into the word ‘doggerel’. For Bond aficionados, there’s plenty to chuckle about.

Best of all are the moments where the author devotes a whole section to a wheeze. What if Roger Moore had returned in 1989’s gritty thriller Licence to Kill? The lines he proposes giving the ‘wrong’ Bond are hilarious – you can see he’s thought long and hard about this unlikely scenario. In fact, it’s hard not to conclude that the whole book isn’t the result of several fun sessions at the pub with other Bond nuts, with the best bits scribbled on beer mats for posterity. There are some puns that the author is so pleased with he includes them more than once, such as the name of a Felix Leiter actor ‘Rik Van Nutter’. Some of the jokes are great: “What’s the difference between Live and Let Die and Die Another Day? In one, Bond jumps over a crocodile; in the other, Bond totally jumps the shark.” Others are further from the target.

One great feature of the book is that it repeatedly, but with grace and humour, kicks the nadir of the franchise, Die Another Day. I recall my verdict on seeing it for the first time. I turned to my companion and said, “That wasn’t just the worst Bond film of all time, or even the worst film I have ever seen: that was the worst moment of my life.” There is a minor exaggeration in the final clause, but reading Sims’ digs at the film are cathartic and soothing. A View to a Kill, in some ways deliberately ridiculous, is also heavily-represented within these pages.

Quantum of Silliness is something of an amuse-bouche – it’s sure to put a smile on the face of the James Bond fan in your life, and it requires hardly any commitment of time to read from cover to cover. All in all, it’s an ideal stocking filler or book for the smallest room in the house. An affectionate and enjoyable diversion. At worst you’ll never be able to look at a Bond movie the same way again.