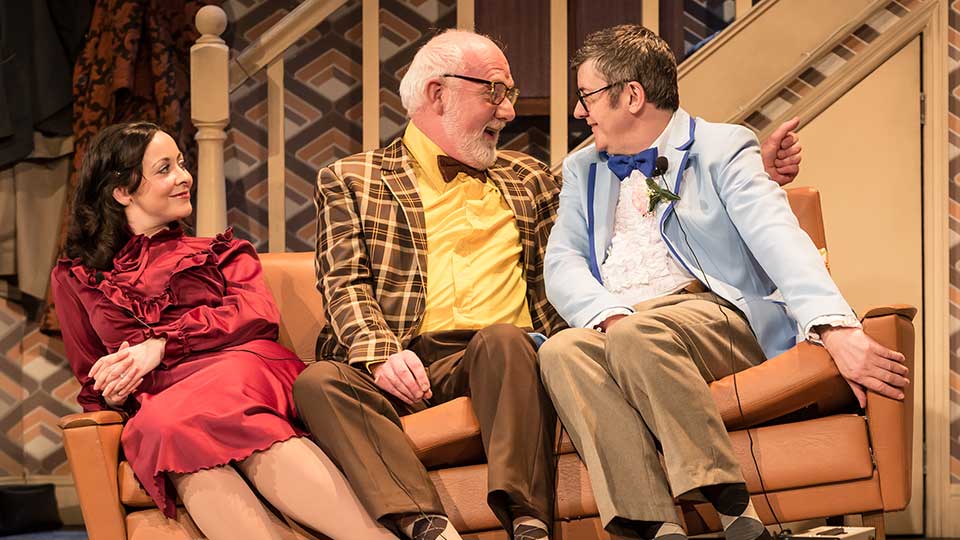 The character of Frank Spencer became a British legend when he was immortalised on TV by Michael Crawford in Raymond Allen’s celebrated 1970s situation comedy. The loveable, accident-prone, innocent and chaotic hero of that series rides again with a UK tour of Some Mothers Do ‘Ave ‘Em, which is currently playing at the Churchill Theatre in Bromley.

This production is a great evening’s entertainment for everyone who loves the TV show, and anyone who enjoys a good laugh besides. It is a fitting tribute to the mad mishaps of Frank Spencer: the 1970s period and static house set give it a ring of authenticity, evoking live audience TV comedy.

Frank (Joe Pasquale) is unemployed and hopeless. He’s used his spare time to fix botched alterations to the rented accommodation he shares with his wife, Betty (Sarah Earnshaw). His only concrete idea for the future is to become a magician, but an audition at the local civic hall hasn’t gone too well. Nevertheless, he receives a letter telling him that the BBC is coming to test him out for a new television show. But Betty has even more exciting news following her trip to the doctor’s that morning! Only with Father O’Hara (David Shaw-Parker) visiting, and Betty’s mum (played by understudy Jayne Ashley on the night we saw it) and boyfriend Mr Luscombe (Moray Treadwell) on their way, all of Frank’s energies are spent trying to provide safe furniture for everybody to sit on, and he’s no time to hear Betty’s news.

Guy Unsworth, who directs his own play, has ingeniously translated half-hour situation comedy into a feature-length two-act farce. It sustains for just under two hours, ratcheting up the tension and the laughs along the way. This is not easy to pull off, but Unsworth manages it brilliantly with a high pace, plenty of great one-liners and a terrific cast.

You’ll be laughing almost from the get-go. The set-up is relatively sedate, and lulls you into a false sense of security. But gentle comedy quickly turns into full on belly-laughs and – scattered throughout the audience – squeals of delight as the anticipation builds. This happens once the elements necessary for farce are neatly set out: talking at cross purposes, mistaken identity, missing trousers and a somewhat convoluted plot that is nevertheless tidily explained by the end. Thrown into the mix is of course a healthy (well, maybe not for the actors) spattering of the physical comedy – pratfalls, backfiring appliances and collapsing furniture – which was such a memorable staple of the TV show.

Providing the audience with riotously funny entertainment is a first class cast. Sarah Earnshaw treads the right line between wanting to please her husband, and feeling worldweary at the burden of it all. David Shaw-Parker is affable as the local cleric, a bit too doddery to be caught up in Frank’s shenanigans, his patience as tested as Job’s. Moray Treadwell makes the most of two roles – and he made a good double act with Jayne Ashley, whose drunk acting was especially hilarious. But Joe Pasquale is at the centre of the show. He is perfectly cast as Frank Spencer, retaining all the qualities of a big heart, infectious naivety and magnetism for catastrophe that we associate with the character. Not only that but the sheer physicality of his performance was hugely impressive, and his general warmth infectious. For farce and comedy of a high pace to be effective, the cast need to work seamlessly together. Last night was all the more commendable for knowing that an understudy took the limelight – yet the whole thing ran like clockwork.

Some Mothers Do ‘Ave ‘Em is a rib-achingly funny night at the theatre, and suitable for all but young children. If you’re short of breath or have a weak bladder, go prepared: the laugh to minute ratio is very high, and there’s little recovery time between big laughs. As a cleverly-constructed farce that beautifully teases its audience’s expectations, and keeps the suspense high, Some Mothers Do ‘Ave ‘Em has a lot to recommend. In the final analysis, the plot of the first half is probably slightly stronger and stands up better than that of the second half – but by the climax of the piece, you’ll have forgotten all about that. The actors richly earned their enthusiastic reception at the curtain call. Go and see this if you need a good laugh!