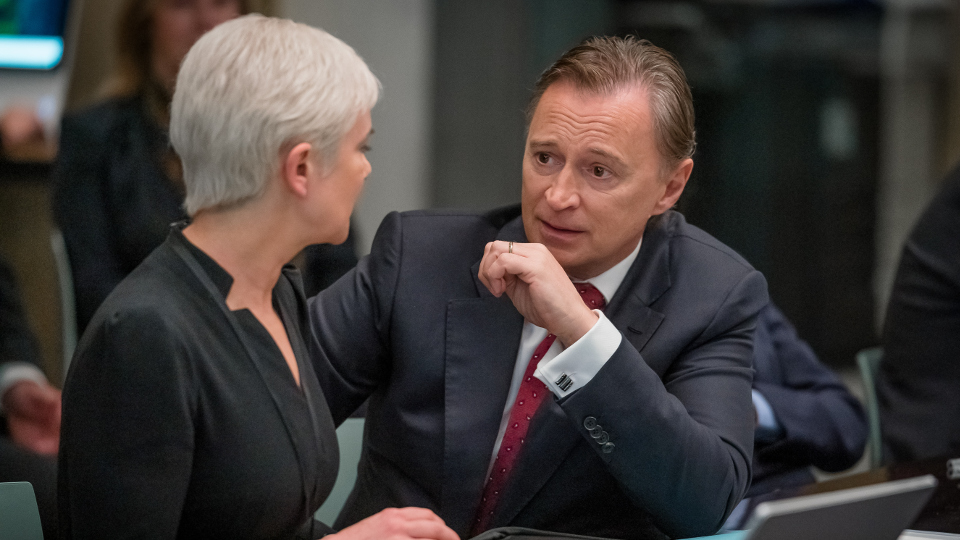 In the latest episode of COBRA, questions were asked about Sutherland’s (Robert Carlyle) knowledge of his daughter Ellie’s (Marisa Abela) involvement in her friend’s death.

The episode opened up with Collier (Steve Cree) checking in with the driver of a fuel tanker. The driver reported having to take a different route then pulled over for a police checkpoint. Collier was surprised as there wasn’t supposed to be any checkpoints on that particular route. After stopping the men who appeared to be police dragged the driver from the tanker, beat him, left him for dead on the side of the road and stole the tanker.

In the Northumberland Red Zone, the news were interviewing a member of People’s Justice, Scott Minett (Charlie Carrick). He explained that the group was a collection of ordinary citizens who had banded together to protect their vulnerable people and stop the looting. The reporter, Manish Patel (Danny Ashok) asked Scott if the rumours of the group being racist vigilantes was true. Scott replied that it was how the media in London were portraying them. He denied being racist and explained that he’d fought for his country. Scott said that family came first and gave a three-fingered hand gesture to the camera citing country, culture and community.

In London, Francine Bridge (Marsha Thomason) updated Anna Marshall (Victoria Hamilton) on the situation and told her that the People’s Justice salute had gone national. Next Anna tried to quiz Sutherland about Ellie but he told her to “Stay in your lane”. Fraser (Richard Dormer) interrupted them with news of the fuel tanker hijacking. The driver had suffered a cardiac arrest and was in hospital in intensive care.

At the morning’s COBRA meeting, Sutherland briefed those present on the hijacking and Archie (David Haig) suggested sending in the army. Sutherland said he would be talking to the General Secretary of the Lorry Drivers Unions, Harry Rowntree (Con O’Neill) later in the day. Next order of business was People’s Justice and their leader Scott Minett. MI5’s Eleanor James (Lisa Palfrey) gave a briefing which detailed that Scott was ex-forces, having served in Afghanistan. He was well respected in the community and the group had hijacked several fuel tankers.

Fraser gave an update on the new super transformer that they needed to restore power to the Red Zone. He explained that it had arrived in the UK by boat and was undergoing checks at Tilbury Docks, Essex for damaged before beginning its slow journey to the North East. Sutherland left the meeting and an angry Archie dashed out after him. Sutherland was still annoyed about Archie’s power grab attempt and the pair clashed.

Meanwhile, new information was published in the press detailing Ellie’s involvement in the death of her friend. Peter Mott (Edward Bennett) got to work trying to deny in.

In the Red Zone, Scott and People’s Justice raided the Police command HQ at Northumberland hospital and demanded access to the fuel reserves. Collier stood up to the entire group and got right in Scott’s face. Scott wasn’t backing down and his men were armed leaving the police no choice but to step aside. Scott taunted Collier by picking up his police hat and Collier promised he would be back.

Sutherland’s next meeting was with Rowntree and it didn’t go well. They explored options to get fuel shipments moving but Sutherland had to leave to deal with the developing emergency in the Red Zone. Rowntree wasn’t happy at the meeting being cut short and Sutherland made it worse by telling him to go for a stroll in the garden instead if he liked.

Sutherland asked for the military to be called in to prepare to evict People’s Justice. The military arrived at the hospital while Sutherland met with the General to decide on what to do. Archie was pushing for Sutherland to show restraint. Anna realised Archie was trying to trick Sutherland and passed him a note to warn him.

After, Ellie came to talk to her father and reiterated her desire to come clean about what had really happened at the party. Sutherland again tried to tell her to push the blame onto her dead friend.

Anna took a call from her husband Sam (Mark Bazeley) who wanted to meet with her. She agreed and he presented her with the photo he was sent of her with Edin (Alexandre Willaume). She admitted to sleeping with Edin but said she didn’t know if she loved him. Sam confessed to having slept with other women and they discussed their marriage. She decided to stay away from home until things were worked out.

Sutherland told parliament that he would do everything to resolve the situation and wanted a peaceful resolution. The opposition pushed for answers to questions about what had happened with Ellie and for confirmation that he wouldn’t tamper with the investigation. He explained how upset his family were and promised that the law must take its course unimpeded. He denied any interference and said that none of his staff had been instructed to do so either.

Anna decided she must meet with Eleanor about the Edin situation. She told her about seeing the name Toni Lulin, an ex-commander of the Bosnian army, on Edin’s phone. Eleanor knew who Lulin was and listened to Anna as she detailed events. Anna said her priority was national security and ensuring nothing affected Sutherland.

On the M1, a roadblock prevented the transformer from continuing its journey. Rowntree and Scott were all over the news gaining support against the government. To make matters worse for Sutherland, Ellie decided that she would tell the truth about what happened and her involvement. She released a video on the Internet to claim responsiblity for the death of her friend.

Sutherland decided to hold a national briefing to explain the situation. He said he wouldn’t hold a General Election and instead invited Rowntree to discuss the situation and find a way forward together. After the briefing, Archie suggested they hold the meeting at Chequers and that they must also invite People’s Justice. Sutherland wasn’t happy but agreed that Scott could come along to represent People’s Justice.

Archie continued conspiring with Eleanor against Sutherland. He was getting ready to really push Sutherland out but Eleanor wasn’t as much on his side now as he thought. She wanted to let events play out further before making a move.

At the end of the episode, back in the Red Zone, Scott further stirred up trouble by making a speech and saying Sutherland had lied about putting the lights back on. People’s Justice carried out an attack on the local council offices. Scott also appealed to the military who were watching and said that the government’s time was up.