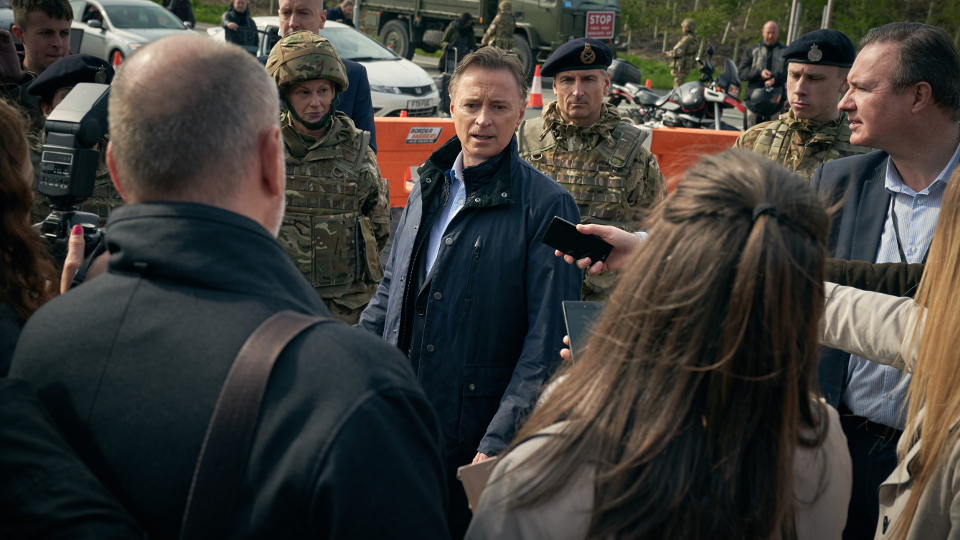 In the second episode of COBRA, Anna (Victoria Hamilton) decided to meet with Edin (Alexandre Willaume) to see what he had to say.

Sutherland (Robert Carlyle) and the government worked hard to try and restore power to the big cities as quickly as possible. However, they faced a difficult decision for four areas which had been left with destroyed transformers. The government only had three spare and it meant one area would be without power for weeks. Sutherland decided to choose Northumberland as the area to be left behind.

In Northumberland, Chief Constable Collier (Steve Cree) was rushed off his feet trying to deal with many situations. Two in particular involved the hospital and an Immigration Removal Center. Fraser (Richard Dormer) paid Collier a visit and later attended the Immigration Removal Center with him. There they found that many prisoners had escaped and the center chief had been stabbed.

Anna met her former lover Edin at his hotel and found out why he had lost touch with her. She was upset with him but they still had feeling for one another and slept together. Before leaving a fire broke out at the hotel and they helped with the evacuation. It almost cost them their lives but they were saved just in time.

Elsewhere in the episode, Fraser found out that his father had died. Meanwhile, Sutherland tried to handle the situation with his daughter Ellie (Marisa Abela).

At the end of the episode, escaped prisoners raided the university halls of residence and attacked the students.

In episode 3, as the country continues to face darkness, Sutherland, Anna, Fraser and their teams pay a visit to the worst affected area in Northumberland to see the situation on the ground.

But with the Prime Minister away, Archie’s incendiary comments on the dark underbelly of public mood threatens to cause more problems for everyone.

COBRA continues Friday at 9pm on Sky One and NOW TV, all episodes are also available now on-demand. Preview episode 3 with our gallery below: