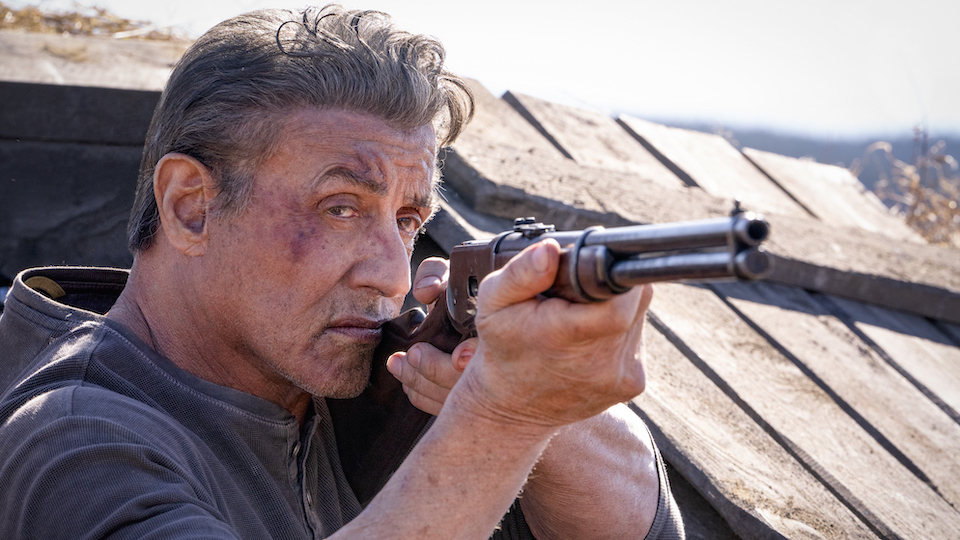 Rambo: Last Blood was widely derided and dismissed upon its theatrical release, as an ugly affirmation of Trump-era jingoism and xenophobia. It certainly is those things, but slamming a Rambo film for being right-wing and a bit racist, is like criticising a Ken Loach film for being a bit lefty. Honestly, have you seen the second, third, and fourth entries in this series of films? They’re basically the cinematic equivalent of the “America Fuck Yeah” song from Team America: World Police. Only in this case, the team is one-man army / mega killing machine John Rambo (Sylvester Stallone).

Picking the story up eleven years since we last saw him ripping throats out and splattering bad guys with a .50 calibre anti-aircraft gun in the jungles of Burma, Rambo is now back in America living on his family ranch. He manages the ranch with Maria (Adriana Barraza) and her granddaughter Gabriela (Yvette Monreal) who have become like a surrogate family to Rambo. They love him and accept his eccentricities, such as the insane network of tunnels he has built under the ranch to make him feel like he’s back in ‘Nam. I wonder if they’ll be instrumental to the plot later in the film?

Gabriela wants to track down her estranged father in Mexico, but Rambo and Maria forbid it, because in this universe, Mexico is akin to the way Europe is portrayed in the Taken films; a generic foreign hell-hole where everyone is a thug, criminal, or rapist, and all the police are corrupt. When they realise she has disobeyed them and gone to Mexico anyway, their crazed and terrified reactions are laugh out loud funny. Needless to say, within 24-hours of crossing the border, Gabriela has been kidnapped by a cartel, and now Rambo is going to go and get her back. And maybe kill a few Mexicans while he’s at it.

As someone who loves the original film, and has a nostalgic fondness of the first two sequels, it gives me no pleasure to report that this is a vile film. It is essentially the same plot as Taken – that other paean to American righteousness and fear of foreigners – but with a sprinkling of Home Alone. The only difference here is that Last Blood’s portrayal of Mexico makes Taken’s portrayal of Europe seem positively progressive.

But as I said at the top of the review, you should know by now what you’re going to get with a Rambo film. You don’t come to these movies for balance and nuance. So let’s cast the ropey politics aside for a moment and just look at it as a movie. Can you ignore the atrocious stereotypes and moral dubiety and just enjoy the film? Well no is the answer, because unfortunately Rambo: Last Blood is dreadful. I’m not sure why Stallone has ceded control of the film to a director with far less skill than he possesses himself. Relentlessly bleak and nasty, and with a script that feels like it was tossed off in a weekend, this is without a doubt the nadir of the Rambo saga.

This film had a reported $50m budget, but for the life of me I cannot see where that went. Shot on the cheap in Spain and Bulgaria, and shoddily thrown together, it is laughably bad in places. Because Stallone is so good, he does still manage to pull something resembling an empathetic performance from the otherwise one-dimensional script. But this Death Wish-sequel version of John Rambo is a far cry from the soulful, wounded veteran we met wandering the highways of the Pacific Northwest.

There are a couple of special features on the Blu-ray disc. First up is Drawing Last Blood, a 50-minute production diary going behind the scenes of the film. The most interesting thing here is listening to them talk about the film they thought they were making, referencing classic 70s movies and masterpieces of American fiction. Goes to show that no one ever sets out to make a bad movie, but they really missed the target by quite some distance with this one.

From First Note to Last Blood: Music for the Massacres is a featurette going deep into the process of composer Brian Tyler writing and conducting the new score for the film, whilst maintaining the themes of Jerry Goldsmith’s iconic music from the original. Finally, the disc also comes with the theatrical trailer.