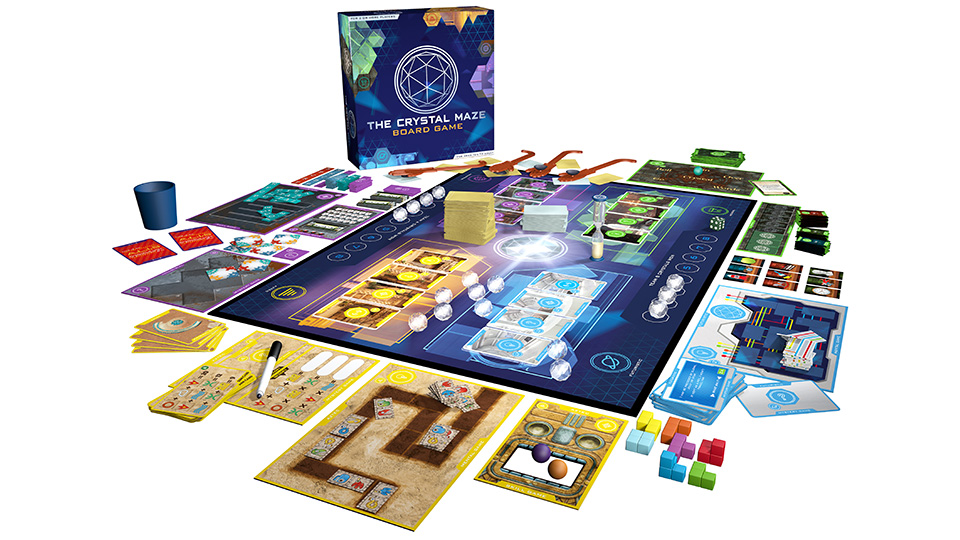 The Crystal Maze is an iconic TV show. The current iteration may not have the same sparkle as the show did when Richard O’Brien fronted it back in the early 90s, but it’s still enormous fun for the whole family. I remember desperately wanting the original board game when I was a kid but alas it never appeared among my birthday or Christmas presents. All these years on I was delighted to see that Rascals have created a new version of The Crystal Maze so I was very keen to give it a go when it was sent over for review.

Featuring a massive double-sided board, The Crystal Maze does a good job of recreating the feel of the TV show. The board is split into four zones – Industrial, Medieval, Aztec and Futuristic – and players are separated into two teams. Each of the zones features four games – Mental, Mystery, Physical and Skill – and you need to work through all of the games to get to the crystal dome finale. Sound simple enough doesn’t it?

When you first unpack the box, don’t be surprised if you feel a little overwhelmed. There are so many different pieces (good luck getting them all back in the box) but luckily there’s a very detailed manual that outlines the rules and solutions for every single game. You can choose a Game Master from both teams to read out the rules and check the solutions or you can have someone who isn’t playing the game take on the role so you don’t have to keep swapping over.

As with the TV show, successfully completing a game results in getting a crystal. I thought the little crystals were a really nice touch and it really did make you feel like you’re part of the iconic show. You can use the manual timer for each game or you can download the smartphone app, which features the classic music as you’re trying to solve your puzzle. If you don’t manage to get a crystal, you get locked in and that player sits out unless they are bought back with a crystal.

The games themselves are pretty simple. Some of them have infinite variations to ensure there is replay value but some of them only have on solution. To be honest none of them are really, really hard but while playing it there were moments where we got the answers wrong or just failed to complete the task. The games include having to roll balls into certain slots on game cards, hiding clues around a room for a player to hunt down and plenty of symbols and maths equations to try and work out.

Once you’ve worked your way through all the games, you flip the board over and take it in turns to grab as many tokens as you can from the crystal dome. This is achieved using a number of silver and gold cards that you scatter over the back of the board. Each player has a hand with a sucker on the end and once you’ve worked out how much time you have in the dome, you go crazy trying to beat the other team. I was dubious about how this would work but it’s actually very effective.

The Crystal Maze is best played with the family so you have a mixture of ages. The replay value does dwindle the more you play it but if you keep changing the teams, you’ll have no problem. The more people you have in your team, the fewer games you’ll complete with each play. I thought it was enormous fun and while a few more game variations would have been welcome, it kept me and my friends entertained for a couple of hours. I think it’s perfect for Christmas.

Advertisement. Scroll to continue reading.
In this article:Rascals, The Crystal Maze