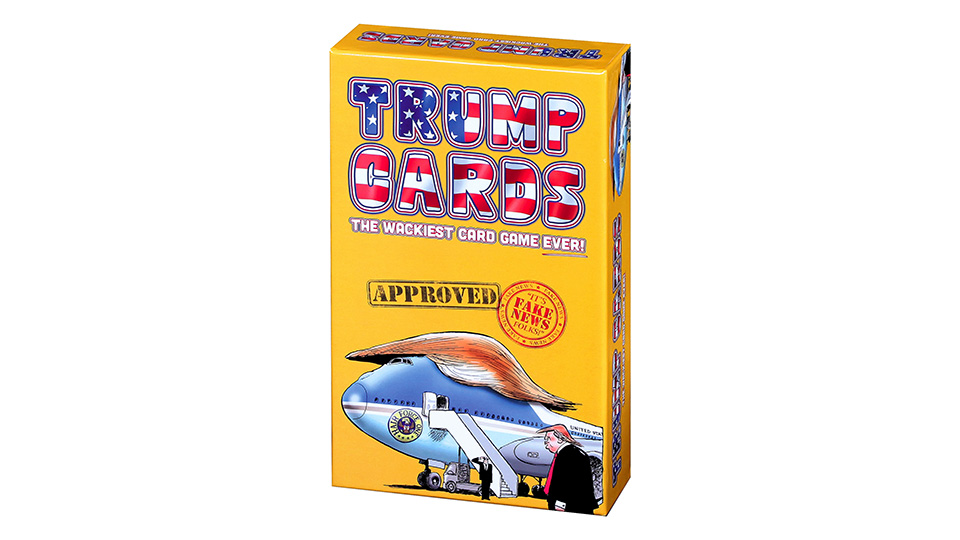 When Donald Trump was named the Republican candidate during the 2016 Presidential Election race, no one really believed that he’d ever win it. All eyes were on Hillary Clinton until election night when Trump won and he looked as shocked about it as the rest of the world was. Since then Trump has continued to defy the odds and its looking certain for a second term when the next election is held in 2020.

Currently in the midst of an impeachment investigation, Donald Trump has certainly ensured that he won’t be forgotten when his time as President comes to an end. From coining phrases such as ‘fake news’ through to repeatedly claiming he hasn’t said things he’s been caught on record saying, we’ve never really seen anything like him in politics. Separating the real news from the fake news is the aim of new card game Trump Cards, which has been published in the UK by Rascals.

Trump Cards contains 300 cards with quotes on them and players have to guess which quotes Trump really said and which ones are fake news. The game can be played with as few as 2 players or as many as 10. Each round a player reads out a card and the other players have to put down an Approved or Fake News card. If players guess right, they get one point but if all players guess wrong, the card reader gets a point. The first player to get to 5 points wins the round and then you can start all over again.

Where Trump Cards succeeds is that it’s very, very easy to play. It takes seconds to get the hang of the game and you can play through it pretty quickly. The game suggests you read the quotes in your best Trump voice and that definitely does add to the enjoyment factor. We cracked up laughing many times over the course of playing and it’s perfect to play with friends over some beers.

You have to be careful to shuffle the cards properly before you play for the first time otherwise the game can be a little easy to win. One observation is that some of the fake quotes are easier to spot than others. There’s a fair few of them that aren’t written in the same style as Trump often talks or tweets and those are easy to pick out. That being said, there are plenty of well-written cards too and we genuinely got a lot wrong as we played through multiple rounds.

Trump Cards is a fun game and you don’t need any particular skill to be good at it, other than having an awareness of how Trump speaks. Given that he’s omnipresent, most people should get to grips with the game quickly. The replay value may become a problem over time as you do start to remember which cards are real and which are fake. If you space out playing games and make sure you shuffle the cards well each time, you should get plenty of life out of the game.

In this article:Rascals, Trump Cards