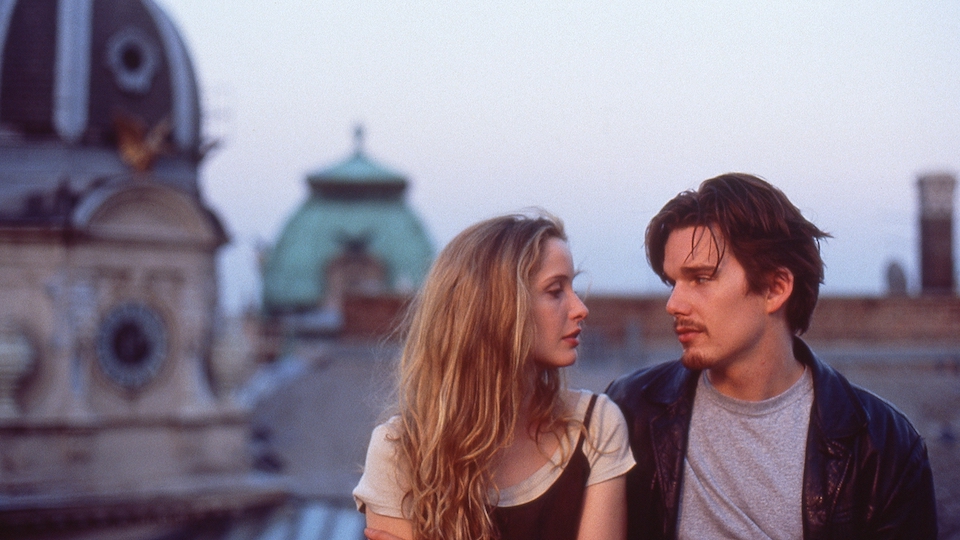 Richard Linklater’s monumental Before Trilogy has been available on the Criterion label in the US for a couple of years, but has now finally arrived in the UK. Get it on your Christmas list now – this is one not to be missed. Linklater’s celebrated collaboration with Ethan Hawke and Julie Delpy, spanning two decades, and chronicling the lives of two characters in real time, is truly one of cinema’s great trilogies. A deeply human story, full of heart, laughter, and painful truths, the Before Trilogy expresses everything you ever felt about life and love, but didn’t have the words to say.

The story begins with Before Sunrise (1995), introducing us to Jesse (Ethan Hawke), a young American with literary ambitions travelling through Europe, and Celine (Julie Delpy), a headstrong Parisian. They meet on a train to Vienna, and then spend the night wandering around the city, talking and falling in love with each other. When the sun rises and their night together comes to an end, they agree to meet back here in six months. Full of idealism, ambition, and romance, the film tenderly observes what it means to be young and have all possibilities ahead of you.

Before Sunset takes place not six months, but almost a decade later, and is a sequel that goes straight to the heart of anyone who has let the great love of their life slip away. Jesse has written his first novel, inspired by that magical night in Vienna, and is now in Paris on his book tour. Celine attends his event at a bookstore, and they pick up right where they left off. Linklater films in long, luxurious takes, as the couple stroll around Paris, and fill in the blanks of this lost decade. It’s an enchanting film, still optimistic, but dimmed slightly by the passage of time. Before Sunset is barely 80 minutes long, and yet in that short time it is one of the greatest treatises on love and relationships and human connection that has ever been made.

The story concludes nine years later, with the 2013 bittersweet masterpiece Before Midnight. Jesse and Celine have been together for nearly a decade now, and are spending the last few nights of their summer vacation in Greece, with their twin daughters, and a group of friends. Linklater, Hawke, and Delpy pour all of their life experience into these now middle-aged characters. It is a raw, funny, emotionally astute, and searching exploration into the love, joy, and pain of a relationship. Complex and brutally honest, it’s a gut punch finale to this story, but always emotionally truthful, as all these films have been.

In a remarkable and eclectic filmography, the Before Trilogy stand out as the signature films from Richard Linklater. It is not hyperbole to say that they are on their way to being considered all-time classics. Echoing and mirroring what came before, they work so beautifully when you watch them in close proximity, and see how the passage of time (travel) loops them back to the very beginning. Playfully cine-literate, gorgeously filmed, and blessed with the astonishingly real chemistry of Hawke and Delpy. It is near perfect cinema.

As I’m sure you know by now when it comes to Criterion, the special features are a treasure trove of goodies, with every disc delving into these magical movies. On the Before Sunrise disc is The Space In Between, a terrific in-depth conversation recorded exclusively for Criterion in 2016, featuring Richard Linklater, Julie Delpy, and Ethan Hawke. This is a brilliant piece, reminiscing on how the first film evolved. These guys are just as fun to listen to and spend time with in real life as they are in the films.

In another brand-new piece for this release, 3×2: A Conversation, writers Dave Johnson and Rob Stone (both of whom are film scholars and Linklater experts) explore the themes of the Before Trilogy. There’s also a short Behind the Scenes featurette.

The Before Sunset disc comes with Richard Linklater: Dream is Destiny, a feature length documentary directed by Louis Black and Karen Bernstein. This 2016 film was made for the PBS series American Masters, and features interviews with Ethan Hawke, Julie Delpy, Jack Black, and Matthew McConaughey, amongst others. Exploring his life and work, this is essential viewing for Linklater fans.

Linklater // On Cinema & Time is a visual essay by acclaimed filmmaker and essayist kogonada, examining Linklater’s visual style and use of time. There’s also a ten-minute Behind the Scenes featurette with on-set interviews with Linklater, Delpy, and Hawke.

The Before Midnight disc comes with a feature length audio commentary recorded in 2013, with the three main collaborators. After Before is a 30-minute behind the scenes documentary made by producer and actor Athina Rachel Tsangari. The film is comprised of black and white footage she filmed on the set and in the production offices/hotel rooms. Essential stuff for fans of these movies, especially the discussion of where a fourth film might go.

Finally, there is Love Darkens and Deepens, a long radio interview with Linklater, Delpy, and Hawke. The trilogy package also comes with gorgeous artwork, and an essay written by critic Dennis Lim. It’s a simply stunning release for these films, and I’m so glad we finally have it available here in the UK. It’s not cheap, but it’s definitely worth it. Buy it, watch them all in one go, and bawl your eyes out at one of the greatest cinematic depictions of the passage of time ever committed to film. Just be wary if you have any travel plans, because baby, you are gonna miss that plane.

In this article:Before Midnight, Before Sunrise, Before Sunset, Ethan Hawke, Julie Delpy, Richard Linklater, The Before Trilogy, The Criterion Collection