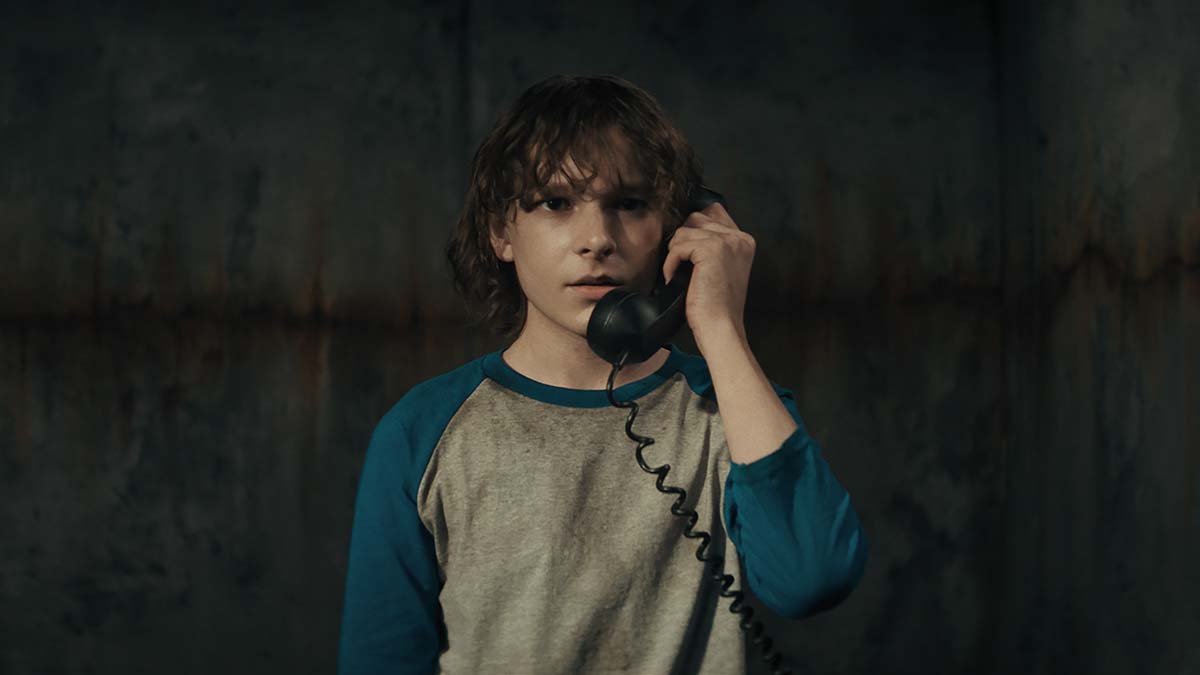 Scott Derrickson is one of the best voices modern horror has to offer. He has consistently delivered some of the mainstream genre’s best horror output over the past few years, with ‘Deliver Us From Evil’, ‘Sinister’ and ‘The Exorcism of Emily Rose’ still held up as brilliantly-effective movies. His latest effort, which he directs and co-writes along with C. Robert Cargill (adapting Joe Hill’s short-story), is a well-made and uneasy film that gets under the skin of its audience and keeps you hooked throughout.

The story set-up is quite simple – a mysterious black van is prowling the neighbourhood of a quiet town. It’s driver, a masked psychopath, is kidnapping children and the town are gripped in fear. Finney (Mason Thames) is a good-natured kid who is being bullied at school and has to deal with an alcoholic father at home. He has a friend named Robin (Miguel Cazarez Mora) that he helps with schoolwork, the local cool kid who knows how to fight, and who has Finney’s back when it comes to the bullies. But when Robin is the latest kid to go missing, the town are in shock.

Finney’s younger sister Gwen (Madeleine McGraw) is the feisty, boisterous one of their family, but she also has a gift/curse. She experiences visceral dreams that prove to be predictive of the future. And her latest visions involve the Grabber (Ethan Hawke) and the ghastly things he does to his victims. When Finney gets taken, Gwen does everything she can to try and locate him, whist Finney himself tries to free himself from captivity. Perhaps the old, broken black phone in his cell might provide the answer?

Horror is polarising at the best of times, especially mainstream Hollywood fodder, but ‘The Black Phone’ manages to deliver a very effective genre chiller that lingers long in the mind. Helped with an amazing cast, Scott Derrickson conjures up some really effective scares that hit the mark and gives the film much more depth than just the over-used jump scares that seem to have swarmed all of mainstream horror these days. That’s not to say that those jump scares aren’t effective (‘The Black Phone’ has a few thrown in for good measure), but the film lets its narrative do the heavy lifting and is aided by three really strong leading turns.

First up is Madeleine McGraw – somewhat of a veteran even though she is only 13 years old, but who already has a very impressive CV including ‘Ant-Man and the Wasp’, ‘The Mitchells vs the Machines’, ‘Toy Story 4’, ‘Pacific Rim: Uprising’ and ‘American Sniper’. She is a revelation here and hands in one of the best leading turns by a child actor in years. With talent far beyond her years, McGraw will be an A-lister in no time. Mason Thames does a similarly impressive job as young teenager Finney. He gives the role a soul and doesn’t play to cliched beats. His performance feels very natural and believable, which really helps with the audience buying into his predicament and championing his pursuit for freedom.

Then there is Ethan Hawke. The man is a great actor – there’s no doubt about that – but his latest run of playing bad guys should be applauded. After an entertaining run in Marvel’s Moon Knight as Arthur Harrow, ‘The Black Phone’ finds Hawke in one of his darkest roles. His is terrifying as The Grabber, a hideously masked killer who toys with his victims. But his performance isn’t big, brash, and loud. Instead, Hawke keeps things very contained and controlled, often softly spoken and always chillingly direct. It’s a brilliantly conceived nightmare which Hawke sells exceptionally well. Coupled with Derrickson’s keen eye for horror and a very effective 1970’s visual aesthetic, ‘The Black Phone’ has delivered another horror character for the ages.

‘The Black Phone’ goes into a very supernatural world as the story progresses, and to say more would ruin the experience. I found these moments less effective than the real-world horror that the opening of the film is grounded in. There was also a few opportunities to broaden the story out, especially involving Derrickson favourite James Ransone’s character Max, a local neighbourhood watch activist who is trying to solve the mystery of the Grabber. But these are minor niggles in an otherwise well-made and effective horror. ‘The Black Phone’ won’t set the genre alight, but it delivers a very competent horror that tries something a bit different. The end result is a story that holds your attention throughout and gives us a great villain to hate.