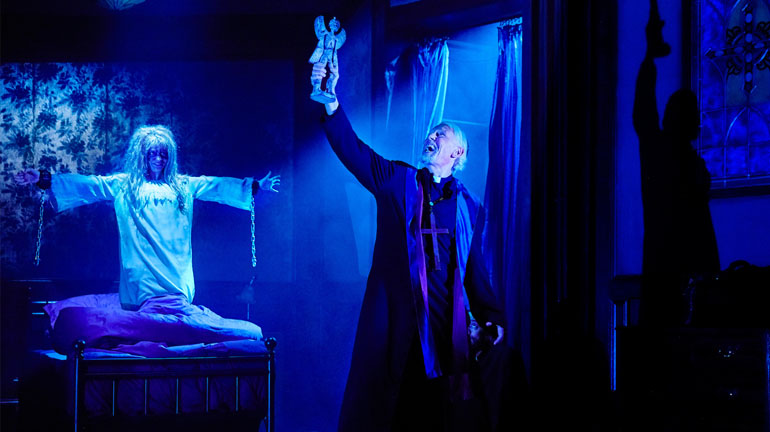 The Exorcist Manchester Palace Credit The Other Richard

In the lead up to Halloween, a stage adaptation of one of the most notorious and controversial movies of the 1970s arrives at Manchester’s Opera House.

The story is simple: an adolescent girl begins exhibiting the signs of demonic possession. Her mother, a famous film star, finds no cure from the medical profession, so she turns to the church in a last-ditch effort to save her child…

The Exorcist phenomenon began as a novel from William Peter Blatty, which he later adapted into a screenplay for Academy award-winning director William Friedkin. The result was a brutally aggressive, documentary-realistic film in 1973 that rocked audiences through its graphic detail and fearless subject matter.

Until the new millennium, the movie was buried in a censorship ban, giving it a near-mythical status. Today, after countless releases on DVD and Blu-ray, The Exorcist lives again and is rightly considered to be one of the finest movies of its time. But is it a story that translates to stage, and can it still raise the same fears as it once did?

Sophie Ward as Chris, Eliza Capel as Regan and Tristram Wymark as Burke. Credit: The Other Richard.

John Pielmeier’s workmanlike adaptation lifts dialogue directly from Blatty’s original screenplay, and these aspects shine through in some scenes, particularly between the clergy and parent Chris MacNeil. There’s a great portion of scratch-written material too, but this is less lucid; designed to overcome the practicalities of the theatrical medium, including expositional, on-the-nose dialogue which weighs down its first act.

In a tale dense with nuance, the script feels eager to overcome mystery to establish exactly who everyone is, and later spell out precisely what’s happening. Part of The Exorcist’s original mood came from elements and characters that were subtly or ambiguously sketched, but the stage version doesn’t carry such self-confidence in the work. It feels anxiously clarified.

That’s probably because the play is pitching its messaging way up to the upper circle of the theatre auditorium like We Will Rock You, and for the sake of absolute clarity is bailing out any residue of subtlety. The logic is understandable, but the source material definitely loses something in its broader pitch.

Then there’s the challenge of making Regan’s rancid bedroom feel enclosed, claustrophobic and inescapable on a cavernous stage. The show goes some way to address this with a compact set design and projection effects from Anna Fleishle, but it’s near impossible to provide a portrait-like intimacy on a theatrical scale. But that’s not to say there aren’t any scary moments — they just come in the form of noisy jump scares and effects rather than a sense of creeping, enclosing dread.

The problem of over-literal direction is demonstrated in some of the most graphic scenes. In the book and screenplay, such harrowing incidents are described bluntly and graphically, however the playbook ramps up the dialogue and direction to near gratuitous levels. Again, it’s to overcome the barriers and distance of staging subtle actions on a large format platform, but the sensitivity of say, Regan’s self abuse with a crucifix, translates awkwardly in its overblown choreography. It’s less shocking and just toe-curling awkward in its grandstanding. Perhaps it’s just me, but I’d prefer to have seen this directed with more discretion. The act is terrifying, not the explicit action.

Ben Kaplan as Damian & Paul Nicholas as Father Merrin. Credit The Other Richard.

The sprawling cast of the film has been carefully distilled into a more focused lineup of key characters. Sophie Ward hands over a suitably angst-ridden Chris MacNeil. She shares a strong dynamic with Susannah Edgely, providing a convincing childishness as the girl at the heart of the horror. It’s an unforgiving and mechanical role in many ways, which comes close to tripping into comical hysteria, yet Edgely pitches it just at the right side of reality.

The ill-fated Buerk, MacNeil’s camp confidant, gets some welcome development here, realised in a flourishing and fun performance from Tristram Wymark. In a small but integral role, stage and screen legend Paul Nicholas glides up as Father Merrin in a subtly withdrawn performance as the elderly priest. Again, much fanfare is made of his arch battle with the demon — something only hinted at previously yet is now a touch over-egged. The ill-fated Father Karras is sympathetically played if thinly written on the page, with Jonathan Blakeley adding some much-needed weight to his dialogue.

The Demon is voiced by the unmistakable tones of Ian McKellen, in a pre-recorded track mixed into the live action. Perhaps due to the cachet of securing McKellen, his voice feels a touch over-deployed. We hear the Demon as an offstage character almost from the off — throwing out any question of the possession being a fabrication of Regan’s imagination — and it also lacks the ethereal, androgynous roar of the screen version. Quite simply, you never escape the fact it’s McKellen, and that’s a real barrier to fearing the invisible demon.

It’s unfair to compare a film to a stage version, particularly a classic like The Exorcist, but the play’s popularity is undoubtedly riding on that reputation. The play is still entertaining, and there’s a surprising amount of production value invested in its run. From explosions to levitating bedsteads and crawling evils across walls, there’s clearly been a huge attempt to make this work within the theatrical setting. But the question remains: does it need to come to stage? Perhaps if it introduces a new generation to the story: ok, yes.

The Exorcist feels like an adaptation from the book if it were to be a B-movie remake. All of the key features are there, but they’re roughly assembled in a heavy-handed fashion. Still, the source material is so strong there’s no escaping its captivating story and troubling themes. A harrowing adventure into the shadows of humanity, this show will undoubtedly shock audiences, but the novel and the movie remain the definitive versions. Most definitely a theatrical version of The Excorcist in every sense of the word.