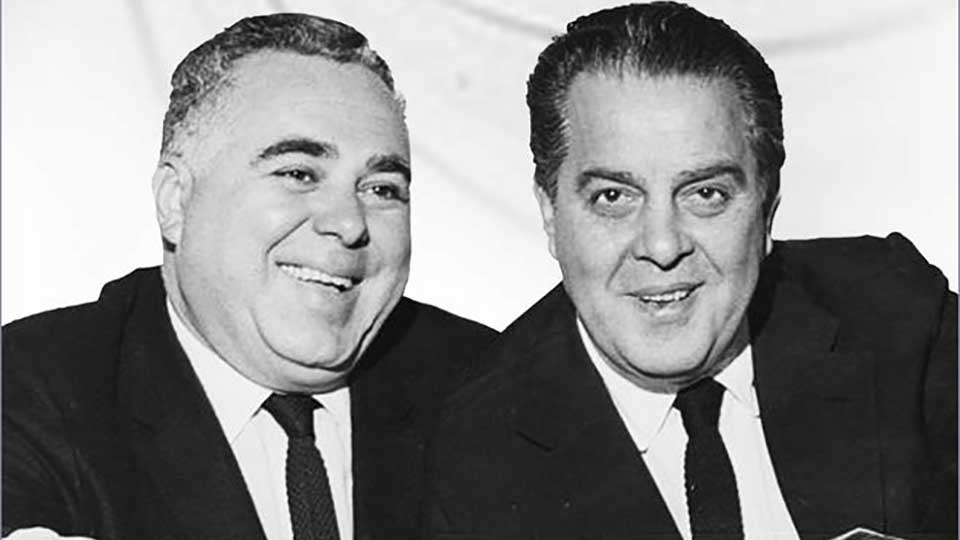 Cubby Broccoli and Harry Saltzman are the two men jointly responsible for bringing Ian Fleming’s James Bond stories to the big screen. Yet, before embarking on the first film, Dr. No, the two men had never met. Coincidentally, both men harboured ambitions to be the ones to make the super spy’s adventures, and both met with resistance and scepticism from industry moguls. Yet together, they created a legendary and ever-growing movie franchise. But behind the scenes, their relationship was constantly fraught with tension and their personalities were polar opposites. How on earth did their partnership endure for over a decade? When Harry Met Cubby is the story of how these two remarkable men became movie producers and jointly created a worldwide phenomenon.

When Harry Met Cubby opens with an overview of the life and careers of both men prior to their joint Bond ventures. Saltzman, a Canadian Jew, has the most interesting backstory, involving a flight from the Nazis in 1940s and time as a spy during the war, which may have contributed to his interest in the espionage genre. We learn where Albert Broccoli’s nickname came from, and how his Italian origins shaped his character. The book follows a largely chronological course, sketching a detailed account of their film work.

The author is successful at illustrating the difference in personality between the two men, and isolating what made each of them tick. Broccoli, generally regarded as the most amiable and reasonable of the two, was content to dedicate his life to ensuring each Bond film was as good as it could possibly be. Saltzman was altogether more ambitious, with an overly-creative mind that had one great idea out of every one hundred – the rest bad or impractical. Sellers explains Saltzman’s interest in deviating from Bond for additional projects from the late 1960s, notably the adaptations of Len Deighton’s novels. The character of Harry Palmer, an anti-Bond spy, turned Michael Caine into a major star.

There is a huge amount of detail in the pages to delight and enthral any James Bond enthusiast. You’d have to be a super-fan not to pick up some interesting nuggets and add Bond-related dinner party ice-breaker trivia to your memory banks after reading this tome. More casual readers may well find the density of the text with quotations and facts, and the unwavering focus on examining a sequential timeline of events, a bit too rich. It carries the reader through the making of each Bond film up to The Man With the Golden Gun (Saltzman’s final association with the series). However, When Harry Met Cubby is painstakingly researched and draws from multiple sources, including quotations from eye-witnesses who worked on the James Bond productions in question, from the directors to the late, great Roger Moore himself.

There are some burning issues that the author simply doesn’t get to the bottom of. Dim light is cast on why Sean Connery hated Harry Saltzman. How the actor felt used and badly treated, and not fairly remunerated, is well-captured, but the personal animosity he held for Saltzman (Connery could sometimes tolerate Broccoli) remains unclear. On such matters, Sellers remains neutral, quoting from multiple sources about the growing acrimony between producers and their star.

Occasionally though, the author does pass judgement. The coverage of the George Lazenby wobble, when the producers attempted a direct Connery replacement and appointed a non-actor who was simply unwilling to play the game, sees Sellers suggest that the producers’ judgement was at fault for trying to directly replace their outgoing star. It was a mistake Broccoli never made again, casting the charismatic and highly successful Roger Moore, who brought a touch of campness, English charm and lightness of touch to the part after the dour Scotsman bowed out following Diamonds Are Forever. Years later (and beyond this book’s scope), Moore would be followed by the dark and brooding Timothy Dalton – another inspired choice and direct contrast.

When Harry Met Cubby takes us to the end of their working relationship, on 1974’s The Man With The Golden Gun. The final few chapters, that wrap up the careers and lives of both men (who died in the mid-1990s), are as poignant as they are sudden. Saltzman’s bankruptcy and ignominious exile from show business may be well-known in Bond circles, but there had been no substantial hints of his financial overreach earlier in the book, which ideally for a lay reader, could have been seeded in.

Despite a few reservations, there’s no doubting that the author is a fine storyteller. There is much in When Harry Met Cubby to enjoy. For reasons stated, I don’t think it quite hit the heights of Robert Sellers’ earlier work Hellraisers, a page-turner about the bad boys of the British film industry, but nevertheless, it broadly captures a compelling story and backs it up with industry insight. There’s plenty for Bond aficionados to enjoy – combining soul and substance. When Harry Met Cubby is a fitting tribute to two extraordinary men. If you love behind the scenes stories about the making of movies, there’s plenty of drama to sate you here.