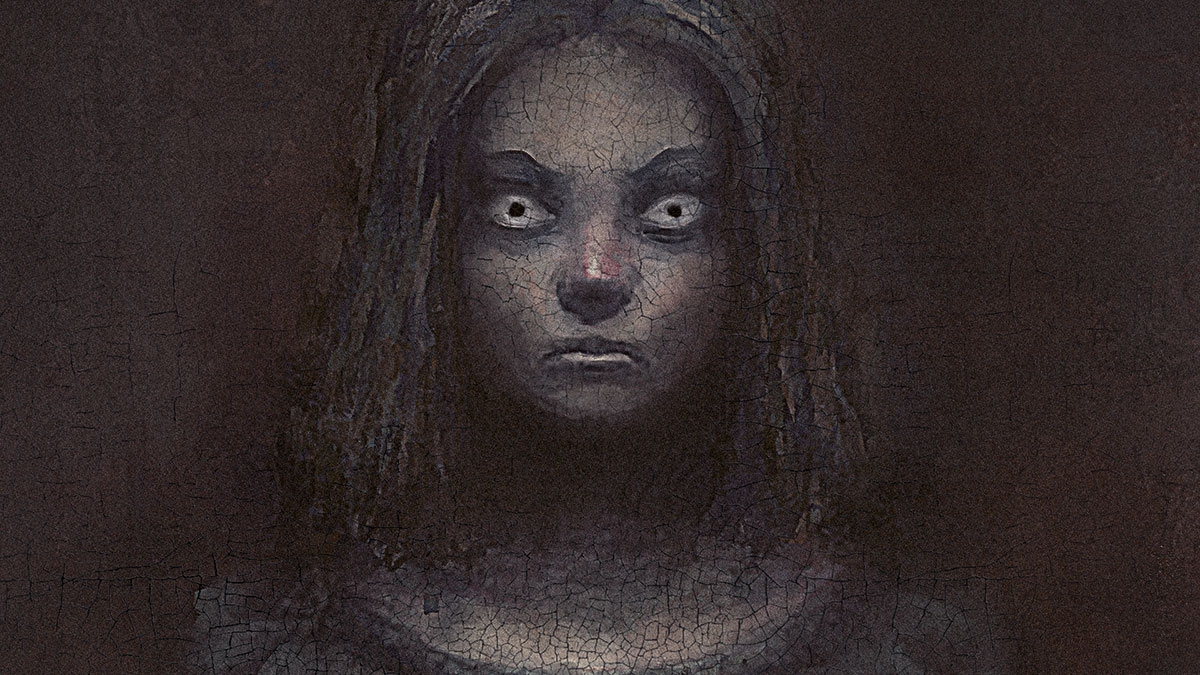 Loner Isaac (Jonathan French) suffers from partial memory loss and he’s offered a well-paid job by his old landlord Barrett (Ben Caplan). The job is to look after Barrett’s troubled niece Olga (Leila Sykes), who is holed up in an isolated house on an island. Swayed by the money on offer, Isaac accepts but when he arrives at the house, he’s told he has to be locked into a vest that’s chained to the basement so he can’t leave the house or enter Olga’s room. After accepting, Isaac’s memory starts to return and he finds himself battling for survival.

The first thing to say about ‘Caveat’ is that the opening is incredibly effective. Never has a drumming bunny toy (not the Duracell one mind) been so scary and film-maker Damian Mc Carthy instantly catches you off-guard. That scene alone is enough to hook you in for the rest of the film, which is a weird and wonderful rollercoaster as a cat-and-mouse game unfolds as Isaac learns the secrets of the house and memories from his past begin to surface.

Mc Carthy’s strength as a film-maker is the tension and atmosphere he creates. The premise of ‘Caveat’ may be a little questionable – there’s no good reason Isaac would agree to being chained and restricted for example – but the way it’s been filmed and directed makes you put those quibbles to one side. Everything you seen on screen is a little strange and it’s deeply unsettling. For example, most of the time we see Olga, she’s sat with her face in her hands mute. It’s unnerving and made all the worse by when we do see her moving, she’s carrying a crossbow.

‘Caveat’ explores many different themes but it’s the exploration of mental health that’s the draw here. Isaac believes that he has never been to the house before but as memories begin to surface, he wonders if that’s actually true. What’s fun as a viewer is that you don’t know which of the characters to believe as they are all unreliable narrators. That forces you to enter into a guessing game and as the tension escalates, you’ll find your mind changing frequently.

On the downside the film has some pacing issues, which means it lulls a little more than it should. The other issue I had, is that some scenes are so dark that it’s actually very hard to see what’s going on. I appreciate that adds to the unsettling nature of the film but there are a few too many long stretches where you’re straining to figure out what’s going on.

Jonathan French is excellent as Isaac. His performance is emotive, desperate and at times bordering on paranoid. For me, he’s the strongest cast member here and it’s a shame that Leila Sykes as Olga doesn’t always manage to match him. Sykes does a solid enough job but she doesn’t quite have the edge that French does.

‘Caveat’ is a film that sets out to unsettle you and succeeds with ease. In parts it reminded me of 2017’s ‘Possum’ by Matthew Holness but overall it’s a much better film than that. ‘Caveat’ will keep you guessing until the very end and there are so many twists and turns, you’ll be questioning what’s real and what isn’t just like Isaac does.