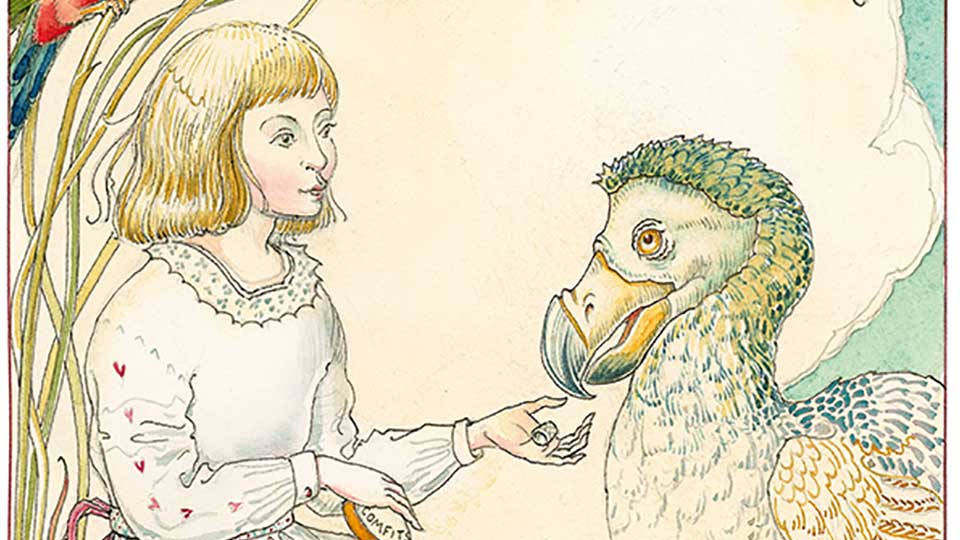 No artist is better suited to illustrate Lewis Carroll’s rich and imaginative dream world than Charles van Sandwyk. A self-taught calligrapher and illustrator, he has been compared to artists as wide-ranging as Arthur Rackham, E. H. Shepard and Beatrix Potter. His gift for bringing animals to life with the gentlest of detailing, and pulling the traits of the human characters to the fore of each illustration makes his work compelling for every reader.

Van Sandwyk has previously worked with The Folio Society on the best-selling The Wind in the Willows (Kenneth Grahame) and How to See Fairies, (which he also wrote), as well as the sold-out limited edition of Alice in Wonderland, which was first published in 2015. This new edition includes many of the same extravagant design details as the limited edition, plus a series of colour illustrations which were originally black and white.

Each chapter opens with an elaborate full-colour dropped initial that is intertwined with motifs from the chapter: the Rabbit’s watch and tiny kid-gloves; the Queen’s roses; a tureen of mock turtle soup. Alice in Wonderland is famous for its typographic jokes (designers have fun with the mouse’s tail in every edition) and there are many illustrative ‘wonders’ to discover among these pages.

In this article:Alice in Wonderland, Charles van Sandwyk, Lewis Carroll, The Folio Society