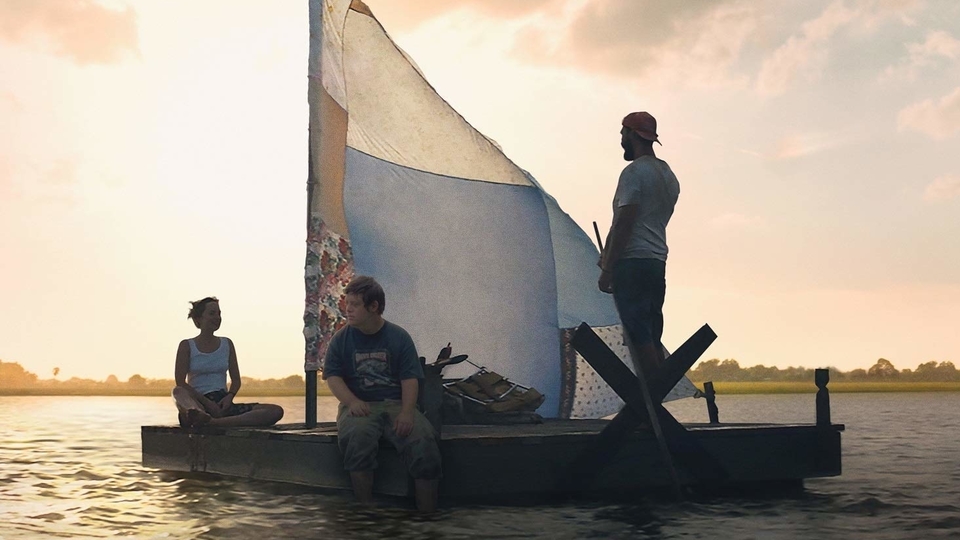 The Peanut Butter Falcon is out in cinemas nationwide now, and is one of the best feel-good films of the year.

The Peanut Butter Falcon is a modern Mark Twain-esque adventure starring Shia LaBeouf (American Honey, Fury) as a small-time outlaw turned unlikely coach who joins forces with Zak, a young man with Down Syndrome on the run from the nursing home with the dream of becoming a professional wrestler. Dakota Johnson (Suspiria, Fifty Shades of Grey) stars as Zak’s loving carer who is trying to track him down.

Check out our 5* review of The Peanut Butter Falcon

We sat down with Tyler Nilson, Michael Schwartz and Zack Gottsagen to discuss the making of this modern classic, how the film came to be and their thoughts on why films with a positive outlook on life don’t seem to be prevalent anymore.

Congratulations to the three of you, I absolutely loved The Peanut Butter Falcon!

It was a real breath of fresh air. Can you talk about how the movie came to be and what your inspiration was for writing it?

MS: We’ve known Zack for about 8 years, and we were making a short-film at a camp called Zeno Mountain Farm (a non-profit, year round organization that hosts camps for people with and without disabilities). And Zack was giving an amazing performance in a western called ‘Bulletproof’…

TN: Zack had studied acting since he was really young… he’d gone to acting middle school, high school, performance art school. He’d been an usher in movie theatres to watch films. And he really committed his life to the craft of performance acting. He expressed his desire to be an actor to us and we were really open. He said he’d act if we write and direct. We’ll do it together as a team. So we teamed up and had a really wonderful experience. We spent a year working on the script and we really wanted to get Zack’s vibe in it. We worked on it for quite some time.

Zack, how was it working with these guys?

ZG: Really good! Tyler would sit down with me and talk to me and make things cool and hip, to act and have fun. And Mike too, and we’d have fun and I’d work really hard with them both. We had a great time and had a lot to do.

…and were you able to do ‘Rule Number 1’ onset?

ZG: Rule number one is party! (a reference to his character in the movie)

Zack, Mike and Tyler fist bump each other

MS: Zack wanted to party all the time! He would take the bullhorn in-between set-ups and would give toasts. He’d thank Nigel for being the best director of photography, he’d thank Tyler for being a great director, thanks to Shia for being a great actor… always giving toasts! And hugs… a lot of hugs!

This is a movie with such a positive, life-affirming message and it was an utter joy to watch. Why do you think these types of film seem so scarce these days?

TN: I think there are still positive films, but I know what you are saying I think it’s more rare to see films like this with maybe more character development and heart. I can only guess but I think in cinema it’s a lot easier to sell tickets for explosions. It’s the business part of it. I think to slow down and talk about character and character development takes away from fast explosions and chases, and the middle ground of cinema is kind of disappearing.

There’s basically not a lot of films like ours making money. You have the large tent-pole films and then you have the small, gritty dramas that sometimes stretch for depth. We just made an indie small drama that wasn’t going to be sad. We were just going to have a good time so I think we found ourselves in a place that not many people go to anymore.

MS: This small film thing – with drama it’s usually based in some kind of trauma, or victimization. I think we really saw Zack as a powerful person already and just wanted to tell a story about a powerful person.

ZG: I just looked into my heart and did want I loved to do. And that’s who I am. Just to be myself for this movie. Because it is about my life from back home, so I wanted to express that feeling. It was great to have friends and family there too. I was able to then express my feelings and see how I can work stuff out about my character. It’s all about love and fun and excitement. And what I love the most is to be around people.

Tyler and Mike, how does your collaboration process work, and what do you each bring to the table?

TN: We just get in a room and fist-fight until there’s one of us left standing!

MS: And we do that for every single decision! I grew up playing sports, and I love team energy. I like having a team-mate for when I get tired. Tyler takes on a lot of the load and when he gets tired I take on the load… and when you trust someone creatively there’s not the stress of being afraid of any decision. I just trust him! We talk about story and share the same sentiments of storytelling. It’s a real pleasure to have a partner. There’s no ‘You handle the camera, and I handle this’ etc, we just work together.

TN: There’s no protection on things, as in; ‘this is my space, this is your space’. We just work together.

The environment plays such an important role in the film, its one of the most beautiful looking films I’ve seen this year. What were the location shoots like and what challenges did they present to you?

TN: And sharks! We were shooting in this deep water and we had a call on the radio… ‘Dude check this out, there are sharks everywhere!’ And we were staying in the water, and the sharks were circling us. And our first AD said ‘there are sharks all around you guys’ and Mike was like, ‘I’ll lose a calf muscle to get this shot, let’s keep going’.

MS: Landscape really did become a character in this movie and really influenced the feeling. We really wanted to lean into that hot summer feeling. Shia would do jumping jacks between takes to keep himself looking sweaty.

I’m a massive wrestling fan, and it was so cool to see Jake the Snake Roberts and Mick Foley in this film…

MS: All three of us love wrestling and I grew up with the likes of Andre the Giant, Hulk Hogan, Hacksaw Jim Duggen, Jake the Snake. Tyler, you’re a little bit younger…

TN: Yeah, I followed that scene too. The atomic throw in the movie is essentially Wrestlemania 3, when Hulk Hogan slams Andre the Giant.

You have an amazing cast for The Peanut Butter Falcon. Can you talk a bit about how you assembled such a great cast?

MS: We are so proud of Shia, Zack and Dakota on this movie. And I want audiences to love their performances as much as I love it.

When we started Tyler and I didn’t have agents or managers, so any famous friends. So no-one would read the script. So we thought we’d make a short trailer, or a proof of concept, and we sent that to people. And I think the actors really saw what Zack was doing and the world we created and wanted to be a part of it.
So we got a couple of our producers who worked on Nebraska so that’s how Bruce Dern got onboard, produced Low Down with John Hawkes so that’s how he came onboard.

MS: Yeah, we hit him up on Twitter. Mick Foley and Jake the Snake we hit up on Twitter too. So it was a real scrappy effort to get everyone onboard. And then Shia called Jon Bernthal and said ‘hey Jon, you feel like you’re my brother so why don’t you come and do this movie’.

The Peanut Butter Falcon is out in cinemas now.