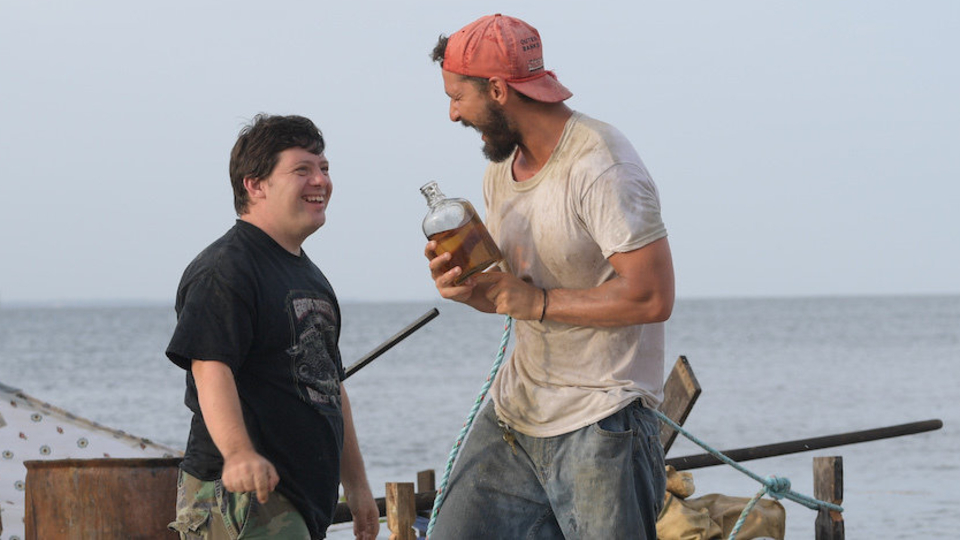 If horror isn’t your thing during October, then you really can’t get any better than this gloriously infectious and genuinely heart-warming tale. Writer/directors Tyler Nilson and Michael Schwartz deliver such a sweet ode to pursuing your dreams that you’ll leave the cinema in a wonderful mood. This Huck Finn-styled tale is a true feel-good gem, and one that we desperately need in these harsh, cynical times.

Zak (a scene-stealing Zack Gottsagen) runs away from his care home to make his dream of becoming a professional wrestler a reality. Along the way he meets Tyler (Shia LaBeouf), out of work and on the run from some locals he has clashed with, led by local business owner Duncan (John Hawkes).

Tyler strikes up an unlikely friendship with Zak and agrees to accompany him to a wrestling school that Zak has always wanted to go to, run by famed wrestler ‘The Salt Water Redneck’ (Thomas Haden Church). But Eleanor (Dakota Johnson), the care-worker assigned to Zak, is on their trail and has to get him back home before the authorities find out he’s missing.

The film has a relevant central message of chasing your dreams and delivers this with a warm, affecting ode to a simpler time. It’s shot beautifully, with the environment playing an equal part to the ambience of the narrative. The location shoots lend authenticity to the story and helps cultivate a really welcoming and warm movie-going experience that will stay with you for long after the end credits roll.

The film hinges on the chemistry between Zack Gottsagen and Shia LaBeouf, with the two actors creating some real magic in this film. Everything about their relationship feels genuine and utterly believable. LaBeouf has always been a sensational actor, and he elevates the film with a stunning performance of nuance and heart, and alongside Gottsagen, who himself delivers one of the best debut performances I’ve ever seen, makes for a formidable leading pair.

The film is blessed with some sensational supporting turns too. Dakota Johnson hands in her best performance to date as the kindly Eleanor, who is desperately looking to track down Zak. Her chemistry with Shia LaBeouf is also really well played – their back-and-forth being a real highlight of the film. Screen icon Bruce Dern is hilarious as Carl, a resident of Zak’s care home who helps him escape. Jon Bernthal, John Hawkes, Wayne Dehartand and Yelawolf also lend their talents and help craft a genuinely engaging story that keeps you invested throughout.

Wrestling fans will revel in the movie too, with ring legends Jake the Snake Roberts and Mick Foley making great cameo appearances. Thomas Haden Church, whom you can always rely on to steal a scene, does just that as ‘The Salt Water Redneck’. Channelling old wrestling personas from the late 80s and early 90s, his VHS promos (that Zak religiously watches) are a perfect ode to a bygone era of professional wrestling. He’s only onscreen for a short while but Church easily hands in one of the best supporting turns of 2019.

As great as the cast are, the relentless work of writer/directors Tyler Nilson and Michael Schwartz deserves huge praise here too. They have created a truly memorable cinematic experience and have done it the hard way. Deciding to make a film for their friend Zack, and to showcase his abilities as an actor, they took matters into their own hands and worked tirelessly to get this movie made. But more than just a gesture of good-will, they have genuinely made a film to be proud of – one that balances drama and emotion expertly, and one that evokes a classic, timeless beauty. The Peanut Butter Falcon is one of those films that will be revisited for years to come.

Destined to thaw out even the coldest of hearts, The Peanut Butter Falcon wears its heart proudly on its sleeve and delivers one of the finest films you’ll see this year. A sweet, well-intentioned and positive movie that actively promotes the human spirit, it’s easy to see why this has become a sensation on the film festival circuit. It’s not often that you find something as life-affirming and fresh as The Peanut Butter Falcon. Go and see it – you won’t regret it for one second.