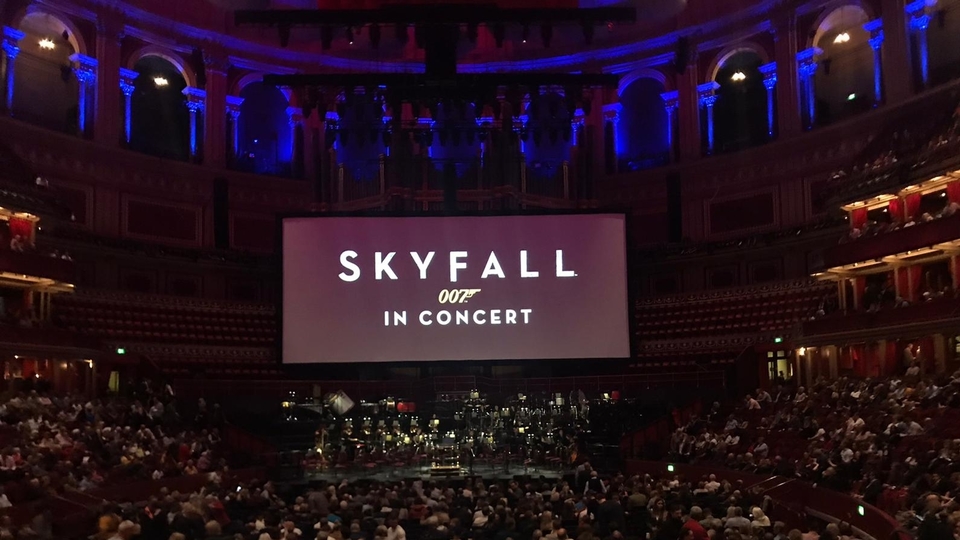 The imperious Royal Albert Hall played host to a series of performances of the James Bond classic Skyfall live in concert.

Part of their famed ‘Films in Concert’ series, the gala event was a must-see experience for Bond fans around the world, as the movie was screened in the hallowed hall accompanied by a full orchestra playing the score live. If that wasn’t enough, eagle-eyed patrons even got a glimpse of M herself Dame Judi Dench, who had attended the event.

The Royal Albert Hall has become a real hotspot for cinephiles over the last few years, with their Films in Concert series being a stellar high point on the movie-going calendar. Tickets always sell like hot cakes, so you’ll want to check their website regularly for their latest film event announcements.

Skyfall: Live in Concert was a memorable affair and offered a new, fresh way to enjoy the film. The breathless opening sequence (which, in my opinion, is one of Bond’s finest) was followed by Adele’s beloved theme song from the movie. Her vocals were isolated from the audio track and played out, but with the full live orchestra providing the music. It was quite a unique experience, especially if you can’t get Adele there in-person!

The film featured the full, original audio dialogue, which was also subtitled too. This creates not only a great, inclusive experience for all but it adds a fresh dimension to the narrative of a film. Reading every word of the script does give the film a new balance, and allows more elaboration to a key scene or some dialogue that you may have missed first time around.

Thomas Newman’s BAFTA-winning original score was performed live by the Royal Philharmonic Concert Orchestra in sync to the picture. After a brief interval, the show started again and it was a joy to experience in such a lavish environment as the great Royal Albert Hall.

After the movie ends (and if you’re a Bond fan it’s hard not to get really excited when Ralph Fiennes hands Daniel Craig his latest mission), the Royal Philharmonic Concert Orchestra burst into Monty Norman’s peerless James Bond theme song live. It was a goosebumps-moment hearing that iconic piece of music performed live with such gusto. You can feel every reverberation of the guitar riff!

Directed by Sam Mendes, Skyfall pits 007 against the ruthless cyber-terrorist and former British agent Silva (Javier Bardem). From a thrilling chase across the rooftops of Instanbul to the violent underworld of Macau, Bond’s pursuit of Silva ultimately leads to the streets of London and the very heart of MI6 itself.

Read our review of the film Skyfall

Skyfall’s Royal Albert Hall performance even coincided with James Bond Day, a social media celebration of all things 007, which has picked up momentum around the world.

Skyfall was the 23rd official cinematic outing for Ian Fleming’s secret agent James Bond 007 character, and was a huge box-office hit around the world, netting over a billion dollars on its release in 2012.

Skyfall was followed on by Spectre in 2015 – a less well-received project, but one that still grossed over $800 million worldwide. Daniel Craig returns as James Bond for No Time To Die in February 2020 – rumoured to be his final outing as the infamous secret agent. He is already the longest serving Bond in history.

For more information on the Royal Albert Hall’s amazing Films in Concert series, check out their website.