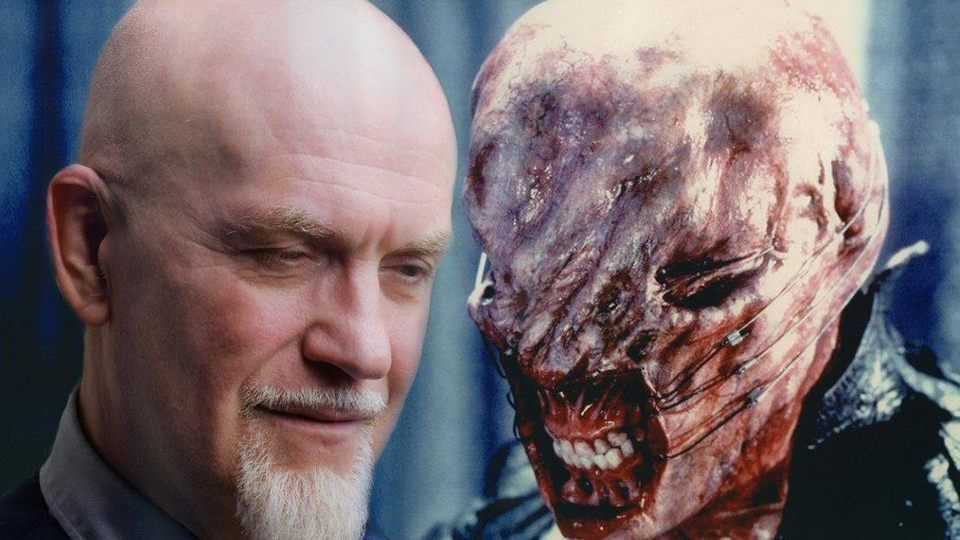 Nicholas Vince is a horror legend best-known for playing The Chatterer in Hellraiser and Hellbound: Hellraiser 2, and Kinski in Nightbreed.

As part of this year’s London Horror Festival, Nicholas is performing one man show I Am Monsters where he promises to share stories from his life and career. The one-hour show promises to be a highlight and there will be three performances (8th, 9th and 10th October) at The Pleasance Theatre.

I caught up with Nicholas to find out more about the show, talk about his experiences in the horror genre, and to discuss what other projects he’s working on…

You’ve got your one man show coming up I Am Monsters. What’s it all about and what can we expect?

It’s about my love of monsters but also at times in my life I’ve not only played monsters, I’ve been made to feel like I’m a monster but also I’ve behaved monstrously because I’m a human being. It’s biographical. You can expect some laughs because I had a lot of fun playing monsters in Hellraiser, Hellbound and Nightbreed and so on. Some of the stories I’ve told before about being part of those amazing films but I’m also putting it in the context of the time and my upbringing and my story.

Why did you decide to do this show. Was it so you could expand on the stories you’ve been able to tell so far?

Yeah. I think that a lot of it is to do with the fact that this is a chance for me to talk about things I’ve not normally been able to talk. But also because I’ve been involved with the London Horror Festival for the last few years. I’ve been a patron since 2016 and I’ve been inspired by the one person shows that I’ve seen over the years. I find theatre really exciting and it’s just a chance to sit and chat and tell stories. It’s always fun.

The horror genre in particular, it’s such welcoming community and a tight knit group. You’re considered to be a genre icon. What’s your experience of the horror genre and community been like over the years?

It’s been amazing. People in horror are just amazing. The community that you referred to, I just find extraordinary… amazing family. Once a year I get to see my FrightFest family, mainly in August but sometimes in Glasgow or at the Halloween event. Then I get to see my London Horror Festival family and all the communities at conventions. My experience? I’m just terribly grateful for the real interest in the work that I’ve been involved with – with Clive (Barker) in particular, obviously – but more recent stuff like Book of Monsters and Borley Rectory. I have great fun is the short answer to that question.

Hellraiser and your role in the film as the Chatterer is the one that always comes up when your name is mentioned. Could you have ever envisaged, when you took on that role, that you would still be talking about it all these years later?

No I don’t think any of us (did). I was lucky enough to be one of Clive’s friends before Hellraiser came along. When I first met Clive the Books of Blood were just about to be published and Stephen King was quoted as saying, ‘I’ve seen the future of horror and his name is Clive Barker’. We knew that Clive was a big buzz in the entertainment world. To actually think that 30 years later that people would still be willing to come along and hear stories about working with him, and hear my story in particular – I did not envisage that in the slightest.

Us horror fans tend to be a little obsessional about things we love and we enjoy talking about them for years and years. Do you ever get frustrated with talking about Hellraiser or do you feel grateful?

I’m incredibly grateful. People do say, ‘surely you get bored of answering questions about putting all the make up on?’ but I don’t, ever because I’ve heard that question before the person who is asking it… it’s a way of starting a conversation. We move on to other things like the experience or the effect that the movie has had on their lives. I’ve heard some wonderful stories as a result and hearing people talking about their interest in the movies. I’ve had kids telling me how they frightened their mother by chattering. There was woman who convinced her friend that the Chatterer was based on a real-life character that lived in the local woods. I just had this lovely idea that this story was a kind of an urban myth with the Chatterer living in the middle of the woods somewhere in Middle America. I’m terribly grateful that I was part of these iconic films and I’m never bored of talking about them.

I saw Hellraiser as a kid and it terrified me. I grew up with a horror fan as a mother so I got to watch all kinds of stuff I probably shouldn’t have seen when I was younger…

I think to be honest (watching it) with your folks… that’s kind of healthy. That’s kind of what I did, I watched horror movies with my mom in particular in the late 70s and there was no DVD or VHS, just what came on late at night. I would have been in my early teens. It wasn’t just horror films, it was the BBC’s A Ghost Story for Christmas that came each year. We watched these things as a family and I think if you’re doing this in a safe environment that can be very healthy because kids need to learn how to deal with fear. I think it’s a great way of learning how to do that.

I completely agree. I had the Nightbreed game on Commodore 64 and I remember being scared of one particular level where you control Aaron running away from Peloquin. I was so terrified I never moved past that level…

Oh wow! (laughs) Commodore 64… it was all pixilated… I’ve never played it because I’m not into computer games but I’ve seen images of it.

I actually only watched Nightbreed for the first time last year on Amazon Prime. I’d been so terrified of watching it because of the childhood associations and actually, it was fine. I got through it!

In October they’re releasing the original theatrical cut and the director’s cut. That movie, when it wasn’t scaring small children, people really appreciated it. People have come up to me over the years and they have a very different reaction to Nightbreed than they did to Hellraiser. A lot of people found solace in Nightbreed in terms of their own feeling of otherness and being a monster themselves.

I can understand that. Nightbreed in a way, is the epitome of what a horror film is. It brings people together through a common feeling of being different or feeling outside. That’s something I’ve always found so fascinating with horror and particularly I think why I’ve been drawn to it as well. Would you say that’s why you originally were pulled to the genre?

Yes. I was always interested in the monsters. When I was a kid I learned about heroes, myths and legends. I could remember the monsters’ names and the heroes’ names but never who they were associated with. I think horror fans are some of the most non-judgemental people you’ll ever meet. They’re really embracing and loving because we all know we’re weirdos (laughs). We don’t judge anybody else. I think for many of us there’s a sense of otherness and an enjoyment of otherness, which I think is good for society. The horror community are non-judgemental and incredibly supportive of independent film.

Besides the show, what else are you working on at the moment?

Honestly, my one man show has taken over my entire life (laughs) until the curtain goes down on the final night. We’re hoping to take this show elsewhere and have a longer life for the show. I’ve mentioned that Arrow are bringing out Nightbreed. I’ve recorded some extras for that. Borley Rectory is about to come out from Nucleus Films. That’s a really interesting project with Reece Shearsmith and Julian Sands, directed by Ashley Thorpe. There’s some other stuff that had to go on the back burner whilst I was writing the one man show. Once that’s all out the way, I’ll go back to writing the long promised third volume of short stories and a feature film project I started work on at the beginning of the year. I’m really excited about it.

I think it’s a fascinating story. What I love about it is you spend a lot of time looking at the screen trying to work out exactly what it is you’re looking at in terms of if there’s a ghostly figure there. Is there something else going on? Ashley Thorpe put so much love into it and it’s Rotoscope. We filmed on green screen and then Ashley went in afterwards and recreated the internal corridors and parts of Borley Rectory as accurately as possible. You really do feel as if you are inside the most haunted house in Britain. It’s about the people and how it got the reputation of being the most haunted house in Britain.

As a bonus, we caught up with Nicholas at the launch of Vincent Kamp’s Queen of Diamonds last week in London to find out what he thought of the project and to discuss I Am Monsters:

I Am Monsters is part of the London Horror Festival. Performances take place on 8th, 9th and 10th October at 7pm at Pleasance Theatre, London. Tickets can be purchased from https://www.pleasance.co.uk/event/london-horror-festival-i-am-monsters#overview.