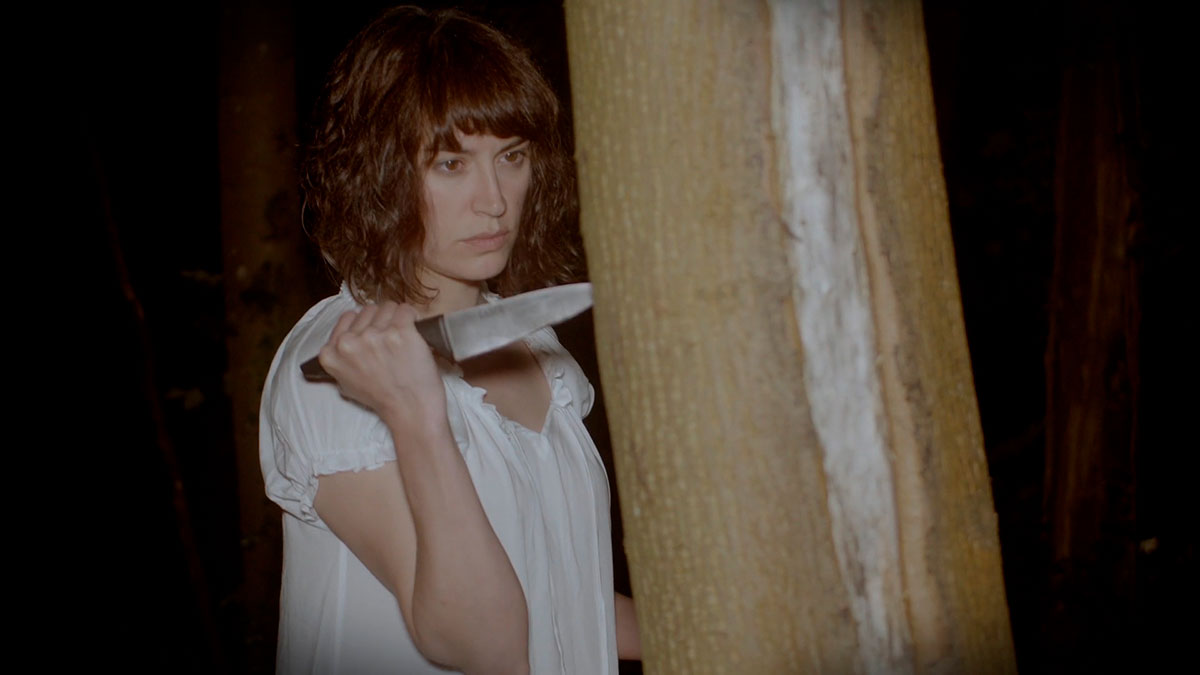 YouTube psychologist Max Spencer (Tom Wheatley) takes on the challenge of helping agoraphobic woman Sarah (Chrissy Randall), promising to help her overcome her fear in 10 days. Struggling with the loss of her daughter, Sarah is convinced that a being called Green Eyes is lurking outside of her house. Max and his girlfriend Nicole (Nicole Miners), who is filming everything, get drawn into Sarah’s world and they soon suspect there’s more going on than what Sarah is telling them.

They’re Outside is the debut feature film from Sam Casserly and Airell Anthony Hayles, and it’s a cross between Blair Witch Project and last year’s FrightFest hit Death of a Vlogger. Filmed with handheld camera, there’s an authentic feel about the film that adds to the believability that you’re watching a show on YouTube. Tom Wheatley is very strong as psychologist Max, really convincing in the role.

When Max and Nicole arrive at Sarah’s house, they don’t get the warmest of greetings. Sarah takes an instant dislike to Nicole but begins to warm to Max, causing problems between the couple. Thrown into the mix is Sarah’s friend Penny (Emily Booth) who we see kill herself at the very beginning. They’re Outside really pushes you back and forth in terms of believing what Sarah is saying, and the film delivers some inventive and clever twists that keep you hooked.

Much of the action of They’re Outside takes place inside Sarah’s home. The film-makers do a good job of making you feel a little claustrophobic as you don’t really leave the same few settings. The climax doesn’t go where you’ll expect it to but it is very reminiscent of the climax of Blair Witch Project. It’s so tense at times that I’m pretty sure I let out a few squeals in the final moments. The film cleverly plays on your fears and it builds impressively over its 83 minute run time.

They’re Outside is essentially a found footage film that draws from the best in the genre and does something a little different. The film truly caught me off guard and I thought it was a very strong debut for Sam Casserly and Airell Anthony Hayles. It’s not a perfect film but there’s plenty there to showcase the directors as rising talents in the genre. I’m a strong advocate for supporting independent and new film-makers, and They’re Outside puts Casserly and Hayles on the map. I can’t wait to see what they do next.