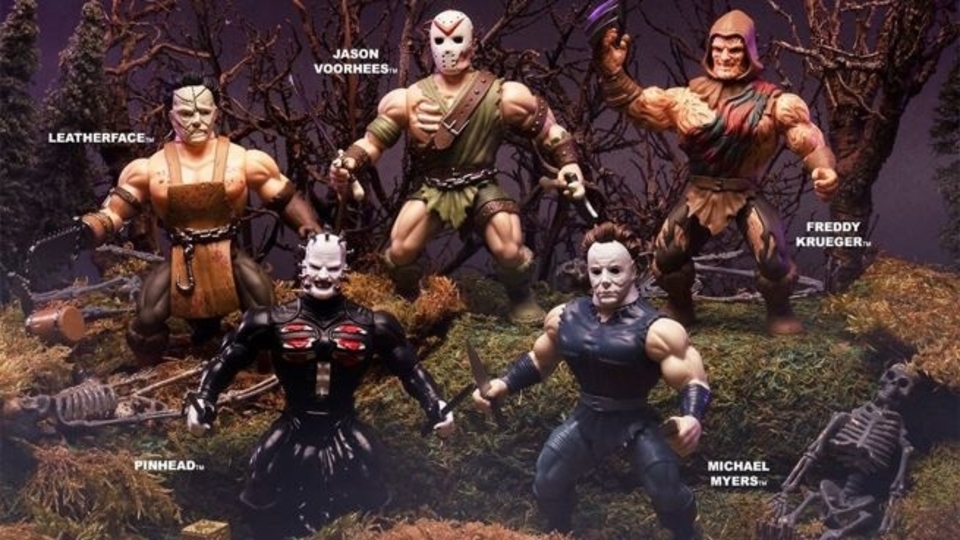 Funko have announced a special new horror line of 5 ½ inch action figures under their ‘Savage World’ banner. The designs take in some of the horror world’s most feared icons including Michael Myers from Halloween, Jason from Friday the 13th, Freddy from A Nightmare on Elm Street, Leatherface from The Texas Chainsaw Massacre and Hellraiser.

The figures pay homage to the style and appearance of the classic Masters of the Universe toys from the 1980s. The bulky, larger-than-life format for figures is proving quite popular of late, with a new line of retro-inspired toys due for release and crafted in a similar style.

Check out the new 2018 line of Masters of the Universe figures including He-Man, She-Ra, Hordak and Skeletor

Take a look at the new 2018 line of Thundercats action figures including Lion-O, Panthro, Slithe and Mumm-Ra.

These Funko Savage World horror figures are going to be in big demand, especially with Halloween just around the corner. Thankfully, they can be pre-ordered on many websites, including Zavvi. Each Funko figure is attractively price-pointed at £10.99.

The wave one set includes Michael Myers from Halloween: Resurrection. The Halloween licence is hard to come by with lots of toy companies making Halloween products. That’s probably why this figure is from the Resurrection movie and not the earlier films, however (and thankfully), Michael’s look doesn’t change much so he still looks like a cracking figure.

Everyone’s worst nightmare Freddy Krueger is included too. The Nightmare on Elm Street legend has a bold new look here and it does make for a great looking action figure. The same can be said for The Texas Chainsaw Massacre’s icon Leatherface, complete with chainsaw and hand mallet attachments.

The Hellraiser himself; Pinhead is brought to life in action figure form (from Hellraiser III: Hell on Earth) and is joined by the ultimate hockey-mask wearing maniac Jason Voorhees, fresh from the Friday the 13th franchise.

Check out the carded images for the first wave of Funko Savage World’s Horror figures;