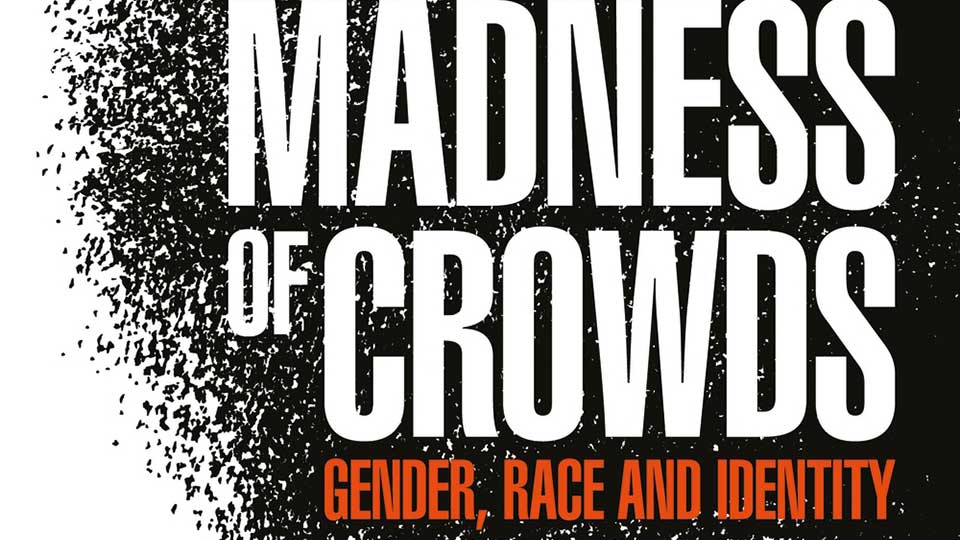 Douglas Murray’s previous book, 2017’s The Strange Death of Europe, became an international bestseller. The immigration crisis in Europe may at first glance seem an unlikely topic for a publishing hit, but the author had ventured where few dare to tread, and opened a sensitive discussion on an area politicians are only too keen to close down.

The Madness of Crowds is Murray’s latest book, and although the subject matter is different, his approach is similar. He sets out in the introduction his intention for the book to be a “Viper system” – named after a British Army device for clearing landmines. Once they are safely detonated, with no casualties, we’re all free to follow into previously dangerous territory. Time will tell whether or not Murray’s method for opening dialogue is effective, but when gender, race and identity politics and the “niche demands” they bring with them impact on all our lives, a thorough analysis and good airing of these topics is urgently needed. This is precisely what the timely The Madness of Crowds achieves.

The four main sections of the book – gay, women, race and trans – provide a history of their associated rights movements. This includes an explanation of how the ground has shifted from their twentieth century origins to the current state of play, demonstrating where their contemporary proponents can heighten differences and widen wounds. The unpicking of these areas is incredibly useful in providing readers with a context to understand how activists for various identity groups think. For example, Murray draws a distinction between ‘gay’ and ‘queer’ – the former describing homosexuals who campaign for equality on the basis that they’re just like everybody else, versus the latter who see challenging and dismantling societal norms and being “part of a grand political project” as a key element of their identity. It is rewarding to see a writer point out the obvious but conveniently ignored truth that the factions making up ‘LGBT’ are unstable elements in themselves, let alone in their strained relations with one another.

In discussing women, Murray turns his attention to the various waves of feminism, and what lessons we can learn in the aftermath of the ‘MeToo’ movement. It includes an amusing aside on the “impossible demands” singer Nicki Minaj makes of her male audience in her song ‘Anaconda’ (the most memorable lyrics from this chart-topper sit playfully alongside the words of GK Chesterton in the book’s epigraph). Race looks at how definitions of racism have changed over time, and how far removed we are now from Martin Luther King Jr’s dream that children might, “one day live in a nation where they will not be judged by the colour of their skin but by the content of their character.”

Saving probably the most hotly-debated topic for last, Murray discusses the trans movement, which has only in more recent years taken root in public consciousness. There are real human stories throughout the book, but the most poignant are found in the trans chapter, told by parents supporting their child through transition. They get to the heart of the profound implications for families. I was left wanting to know more about the fate of one mother’s daughter, which is inconclusive in the book – perhaps indicative of the complex web of possible outcomes.

Having established in a brief interlude the Marxist foundations of gender and identity politics, Murray then argues persuasively that everything is now over-politicised, and counsels readers to step back from this and derive meaning outside of ideologies and narrow identity groups. It’s hard to say that this conclusion is unearned. Murray writes about thorny, tangled issues that can provoke strong emotional responses with clarity and sympathy. Naturally, his dismantling of the logical contradictions and absurdities at the heart of much of gender and identity politics will prove too provocative for its ideological adherents, but in doing so, Murray offers a great public-spirited service to the rest of us.

While Murray pulls no punches in attacking bad ideas, The Madness of Crowds is not an attempt to disparage or mock difference. Rather, Murray writes with nuance and sensitivity about the most divisive and dangerous issues of our day, and in doing so, removes some of the toxicity that has made public discourse around them so broken and unedifying. What he achieves is a temperate and lucid account of where our societies are heading, what the dangers are, and how we might avoid them. At the same time, The Madness of Crowds is a thrilling read, full of easily-digestible arguments, wit and powerful turns of phrase. It’s a reminder that, as well as being an at-times provocative public intellectual, Murray is also a fine and never less than interesting writer.

The Madness of Crowds is essential reading for anyone who is already concerned by the ramifications of gender and identity politics, especially the impact these ideas have upon younger generations. But I strongly suspect it will also prove a survival guide for many who believe they should fit in to one or more of the identity groups discussed within its pages, but who have nagging questions about the legitimacy of the dogma that comes attached to them. The Madness of Crowds is your route map from madness to sanity. Timid readers can always remove the dust jacket in public if they’re not quite braced to come out to friends as a heretic. But they may find the water surprisingly warm. Don’t forget, the author has already set off the tripwires in advance so you don’t have to.

See our interview with Douglas Murray for more about the writing of The Madness of Crowds.

Advertisement. Scroll to continue reading.
In this article:Bloomsbury Continuum, Douglas Murray, The Madness of Crowds, The Strange Death of Europe