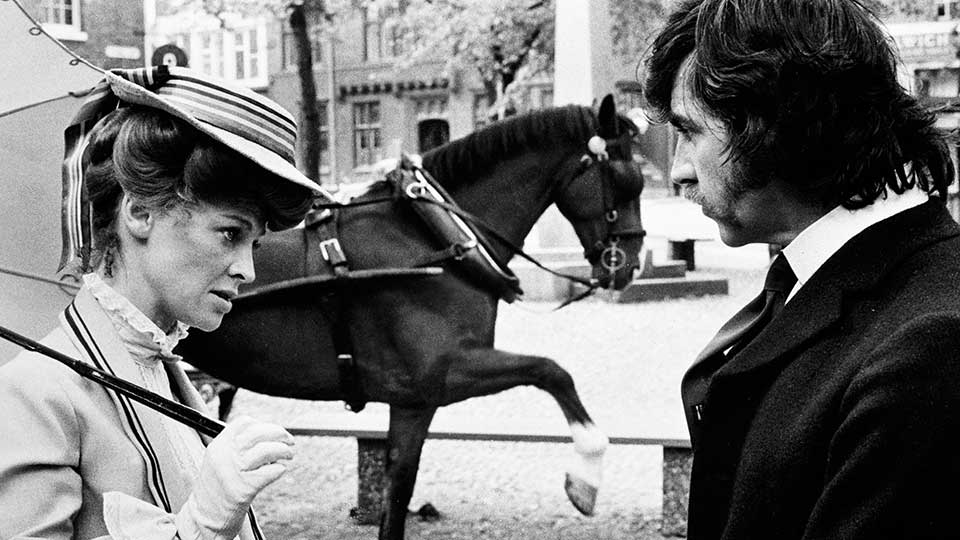 The classic British movie The Go-Between, starring Julie Christie and Alan Bates, has enjoyed a fresh release on DVD and Blu-ray. The 1971 film is an adaptation of LP Hartley’s classic novel, adapted for screen by Harold Pinter with direction by Joseph Losey.

An illicit adult love affair is seen through the eyes of a thirteen year-old child. Leo (Dominic Guard) is invited to stay at his rich friend’s country estate for a summer at the turn of the Twentieth Century. When his mate becomes bed-bound with measles, Leo instead befriends the older sister Marian (Julie Christie), for whom he develops a childish crush. Without fully comprehending the nature of the affair, but keen to please Marian, Leo agrees to convey messages between her and Ted Burgess (Alan Bates), a local farmer.

Naturally, for a British story, there is a strong theme of class division. Leo himself is roundly mocked by his friend’s much wealthier family for the relative poverty of his clothing. But the most savage gulf in class is between Marian and Ted. Her family expects her to marry the aristocratic Viscount Trimingham (Edward Fox), and her affair with a common labourer would cause scandal if exposed.

Joseph Losey’s film beautifully captures an important summer in the life of an adolescent boy. The house and gardens are perpetually bathed in a golden, almost autumnal light. It is a moving portrayal of the end of innocence, as childhood is crushed under the weight of adult lust.

There are meticulously-observed performances to enjoy. Julie Christie, at the peak of her powers and beauty, is as spellbinding as she was throughout that decade (Don’t Look Now was just around the corner). Alan Bates is suitably rugged and handsome as Ted, though there are moments of sophistication that play against the gruff nature of his character. Michael Gough is effortlessly sublime as Marian’s father, and Edward Fox is as louche and charming as you’d expect.

Credit must also go to Dominic Guard, who gives a terrific central performance as Leo. Losey certainly gets the best out of his juvenile lead. Sadly, the same cannot be said for some of the other younger actors, who can be a touch over-the-top. Look out for a young Roger Lloyd-Pack: he would rarely play aristocrats, so his role here plays against expectations. Fans of Michael Redgrave will enjoy his cameo as the older Leo – exuding quiet dignity and suppressed trauma.

Overall, The Go-Between is a touch ponderous, taking two hours to tell a fairly repetitive and unsurprising story, though the pay-off is rewarding. The other problem is that, Leo aside, there is an absence of sympathetic characters. Knowing that Leo is being manipulated and used by adults to aid them in conducting a sordid affair makes it difficult to like Marian and Ted, or wish for their liaison to survive.

The 4k restoration is very good, though there are some moments where the frame rate is a touch off. But since Losey ensures everything looks so pretty, The Go-Between is a good film to enjoy in high definition. There is a charming recently-filmed interview with Dominic Guard (who worked consistently as an actor until leaving the profession in the early 2000s). He reflects with admirable detail on his time making what would become considered to be a classic of British cinema.