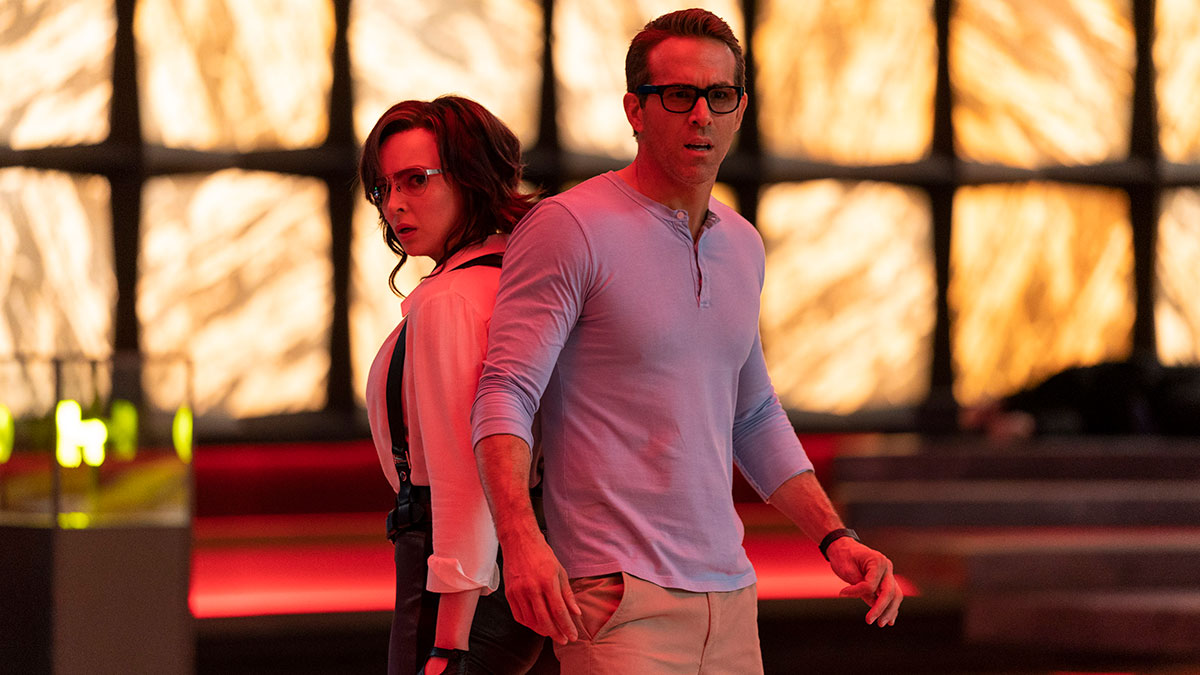 What if a non-playable character in a popular computer game became self-aware? That’s the simple but very effective premise to ‘Free Guy’, a fun and entertaining family blockbuster that perfectly riffs off the tropes of open world/free roaming video games like Grand Theft Auto, to deliver a summer movie with action, adventure and a lot of heart.

Ryan Reynolds stars as Guy, a happy and content guy who loves his life in Free City. He works at the bank alongside his best friend Buddy (Lil Rel Howery). He wears the same blue shirt every day, orders the same cup of coffee and is well set into his daily routine. Unbeknown to Guy, he’s actually a non-playable character (NPC) in the sprawling video game ‘Free City’, as players from around the globe log in and have fun in a no-limits world, where Guy’s bank is regularly robbed for game credits. One day Guy spies a woman who captivates him named Molotov Girl (Jodie Comer). Before long, she is going to open his eyes to a whole new world – one where Guy gets to be whatever he wants to be.

Shawn Levy knows how to do these types of family blockbusters in his sleep, and the director delivers an engaging and entertaining ride that has some impressive ideas. This is the first gaming-inspired film that really captures the true essence of modern gameplay culture. It’s nods to the gaming experience, the users and the environments are acutely realised with both wit and genuine heart. On the surface, ‘Free Guy’ is an easily-dismissed concept movie – but like any sandbox game, there’s a lot going on under the surface, making this a worthwhile watch.

The film works hard to deliver something more substantial for the audience – a move that consciously builds upon the simplicity of its amusing set-up. That’s where the brilliant cast come in. Ryan Reynolds is perfect for this kind of engaging lead and has the comedy chops to handle all the set-pieces with wide-eyed wonder. He shares a great chemistry with everyone, especially Lil Rel Howery who is a beacon of positivity in the film.

Jodie Comer is fantastic as Millie, the woman who is struggling to find evidence in the game that the software developers stole her and her partner Walter “Keys” McKeys ideas. ‘Stranger Things’ alumni Joe Keery is always a joy to watch onscreen and adds a relatable charm to Keys that bounces wonderfully off of Comer’s Millie, conjuring up some sweet and heartfelt moments.

Taika Waititi steals all of his scenes as Antoine, the power-hungry head of the software house that is up to nefarious things. His one-liners are hilarious and his performance is straight out of a pantomime, giving the film and easy and enjoyable villain to boo and hiss at. Utkarsh Ambudkar is entertaining as Mouser, a fellow software engineer, and Channing Tatum is superb as the hero Avatar of a 20-something gamer living with his mum, who is at the centre of a lot of the film’s funniest moments. There’s even a few voice and in-person celebrity and gaming cameos to keep an eye out for too.

The romantic element to the film is surprisingly effective too, from the wonderful performances of Reynolds, Comer and Keery, down to the toe-tapping beats of Mariah Carey and the hauntingly beautiful score by Christophe Beck. The film has loud and brash action sequences that assault the senses as you’d expect for this type of film, but the film’s quieter moments are actually handled with a lot of maturity and vision, making you care about the characters and their stories.

‘Free Guy’ is a surprisingly fun movie that has much more going for it than just its gimmick. When you bring an amazing cast like this together, they are all going to shine and they do so here, guaranteeing a really pleasant and enjoyable visit to the cinema and giving us a nice break from the doom and gloom of the real world. ‘Free Guy’ won’t change the world, but it does do the basics just right to give us the best gaming film we’ve had for years.