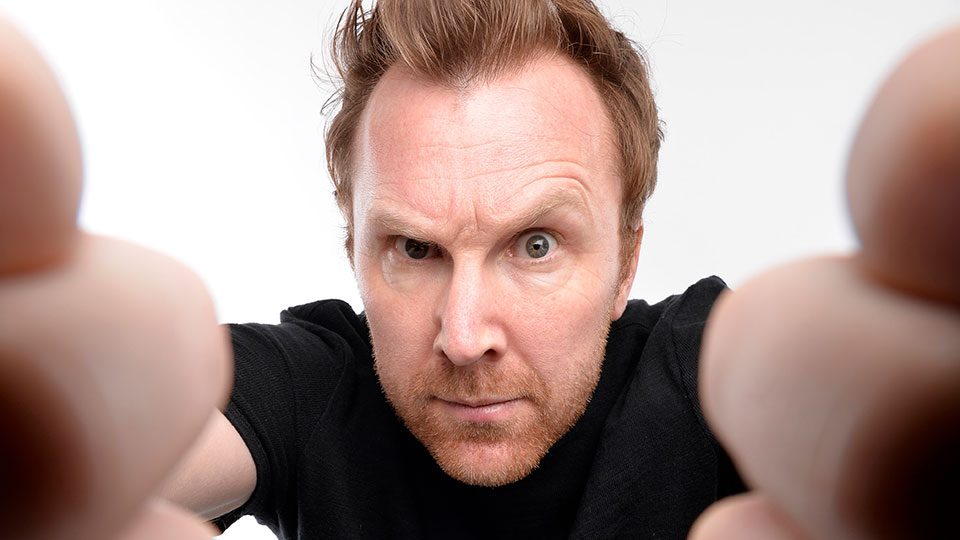 Award-winning comedian Jason Byrne is going back on tour with his new show Wrecked But Ready.

Byrne has been doing stand-up for 23 years, appearing at venues throughout the UK and Ireland to sold-out audiences. He has also performed in New York, Boston, Hong Kong, Paris, Sydney and more. The Times described him as “the outright king of live comedy”. Byrne has appeared on Live At The Apollo, The Channel 4 Comedy Gala and One Night Stand. He has also hosted three series of The Jason Byrne show for BBC Radio 2, culminating in him winning a Sony Radio Gold Award for Best Comedy.

You’re going out on tour again around the UK. What can audiences expect this time around?

I’ve called the show Wrecked But Ready. It is based on the kind of year I’ve had, which has been a massive graph of ups and downs. I split from my wife of 20 years and I always talk about my children on stage. I mainly do light-hearted stuff from my angle. It’s just about me trying to get used to the way I am right now. I’m a bit like a racehorse that has lost its jockey, so I’m all over the place. I’m going straight through the fences, I’m not jumping over them. I talk about trying to live on my own again which is weird. Having to put washing in on my won, cooking for one and other more heavier and ruder stuff.

You mention having to cook for one now. So, do you do all your meals in one go, freeze them and then defrost one a day?

That is very much a female thing to do. There is no way a man is going to be that organised. I’ve learnt all these things now. I went into a butchers and I thought a butchers just sold meat but they don’t. They sell pre-made meals that you just need to put into a wok and stir it up. You don’t even need to chop anything. So I literally go into my butchers and ask him what is for dinner [laughs]. He’ll say “I’ve got a nice chicken curry for you” and all I’ve got to do is heat them up in a pan. I feel like I’m cooking (laughs). As I said, it is a light-hearted look. I do all this at the start but within twenty minutes I’ll have three people up on stage in a box each on a baby trampoline doing a little stunt. It is basically the same stuff as before but with a sprinkle of misery (laughs).

Audience participation is a big thing when you go on tour. Can you recognise the people who don’t want to be involved? Or do you just pick on anyone?

The best way you can tell is that they stand up and walk out of the theatre (laughs). No, only joking. Because I’ve been doing this over twenty years I’ve learnt a lot about body language. I do it automatically. It’s not that hard. It’s the way they are sitting or holding their arms. If their arms are crossed then I won’t go there. But if they are open, body-wise, then I get them up on stage. But if they have their hands up or waving and they want to come on stage then I go ‘No, they are not coming up because they are nuts’. I don’t get people up immediately. I do normally wait ten or so minutes. It’s like I’m grooming the front row (laughs). Then I get them up.

What has been the worst audience participation moment?

I got a guy in a box, this was years ago, and I dragged him around on stage. I put a little beanie hat on him and said to him “Pretend you are about five years of age and the box is a car”. I gave him the microphone and he had to make the noises of a car. So he had to go “Neeerrrrr Neeerrrr Neeerrrrr” as I dragged him around the stage. He started to do it and then he started to get upset and ended up crying. It was all a little bit awkward. I very gently coaxed him out of the box and put him back in his seat. I must have done some psychotherapy on him and didn’t even know. So, that happened. OH MY GOD! In Ireland there was a guy who was about sixty and he was wearing shorts and one white sock up to his knee on his left leg. I said “What’s the story with your leg?” and he said “Oh, my leg has gone”. Now, in Ireland when you say your leg is gone it means it is like a dead leg. I said “Oh you lazy fucker. You’re like my dad moaning about his gout.” And I kept teasing him. I had a break and I came back out for the second half and his fake leg was on the stage. He took it off and left it on the stage (laughs). I went over to him and said “I’m so sorry. I didn’t know your leg was actually gone.” (laughs). It’s stuff like that that just goes on and on and on.

You incorporate a lot of props in your tours. What is the most bizarre prop you have on this tour?

I suppose the UV gun will be my favourite one. The most bizarre one will be the boxes that each person will wear. I can’t give away why. But the reason why, when it is revealed, will either be really good or really bad (laughs). Let’s just say it has something to do with a pop star who has passed away (laughs). It will either be really funny or not, but that’s why I do these shows.

How do you find them? Do you seek them out? Or are just walking past something and think it will make a good prop for the show?

Both. One of my favourite ever props was a Deal Or No Deal type box. It was my favourite prop so much that I’ve been thinking of having it on the show all the time. Basically, I always have three boxes on the stage. They each have numbers on them. Somebody in the audience will say something to me. They are heckling me. Everyone is boo-ing the heckler but I let them talk and I would say “Let’s make friends. Do you want to play a game and win some money?” and the heckler agrees every time (laughs). So I go behind the boxes and ask the heckler to pick a number. They go “Errr six?” and I go “Best of luck” and I open the box and on the inside lid is written the word C**T. (laughs) All these props evolve from one thing or another. Once I found a giant wooden peg and that became ten minutes of stand-up. I have found stuff and made stuff. Biggest prop that was ever built for me was a High Striker, those things from the fun fair where you have to hit it with a hammer and it goes ding at the top, which was built for me in Melbourne. I put a man at the top on a chair with his legs open. A boxing glove would shoot up and hit him between the balls. It never actually hit him, it always missed him by about four inches. At the very bottom his wife was allowed to bang the fuck out of it (laughs). That was the biggest prop I’ve ever had made. It was brilliant.

How long do you spend working on new material?

All year. It all depends on where I am in my life and what I’m doing. When I’m doing my British tour I’m always taking bits out and adding bits in. I will change bits.

As you will well be aware, audiences start to shift about a bit and gather their belongs when they know the show is coming to a close. So, can you say what the last word of the show?

What is the last word? Errr… the last word will be… oh yeah, I was going to do… people say to me “what have we learnt from this show?” and what I say is “Leave your wife if you want to” [laughs].

Exactly. Whenever couples watch anything together on television or live, the wife will always bring it up in the car or at home. Just in case… just in case… you are thinking about it. Even if they go to Cirque Du Soleil, the wife will look at her husband and go “Don’t you dare get bedsheets hanging out of the attic” (laughs).