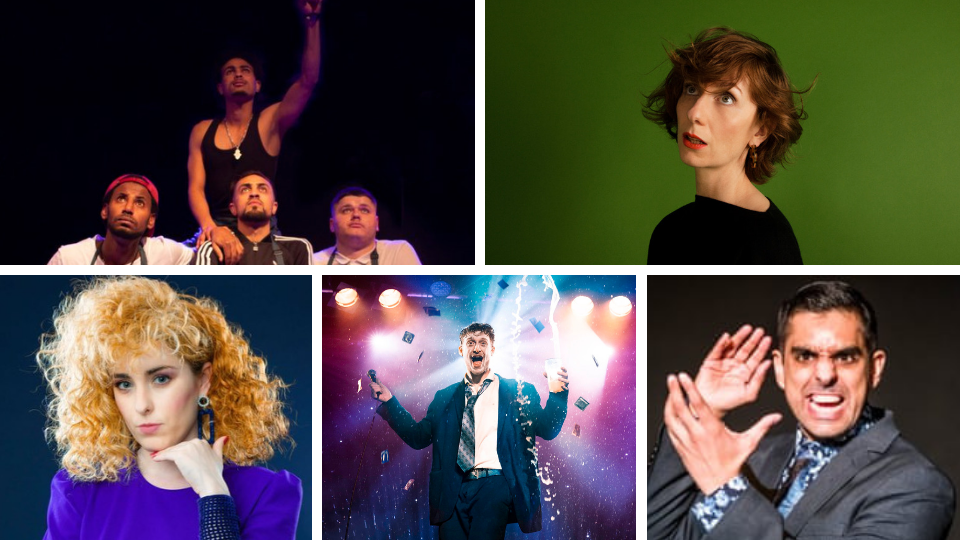 One of the leading refugee theatre groups in the UK, the inside scoop on Fake News, an 80s power ballad cabaret and tragi-comedic stand-up character comedy from the Big Apple are among the top picks below to get you started as the fringe festival unfolds.

Phosphorous Theatre presents four former child-refugees from Eritrea, Afghanistan and Albania working your average shift in your average pizza shop take us on a journey across time and continents to show how extraordinary they are. Having told their stories to social workers and courts as part of their asylum claims they’re now reclaiming them. From prisons in Libya and Greece, to imagined conversations with mothers, to raising future sons, they shine a light on masculinity and forced migration.

A budding journalist lands a dream internship at the country’s biggest online news organization. There, he stumbles on an earth-shattering story and decides to click publish. There’s just one problem: it’s completely untrue.This is fake news, but not as we know it! Whatever you may be expecting about Russian hackers or election meddling, think again. Because this is the story of how the media really works – from someone who knows what it’s like behind the scenes: TV journalist & writer Osman Baig. Read the Entertainment Focus review here.

Best hasn’t slept properly in years, which is why she feels like a ghost and looks like a shoe… A whip-smart, animated hour for anyone who’s ever stared wild-eyed at a ceiling or stood very still in their kitchen. Debut stand-up show from Funny Women Award winner.

Following last year’s sell-out show, character comedians and IRL sisters Maddy and Marina are back and bigger than ever (at least physically). This August will see them squeeze their genes (and jeans) into the auld heffer. Expect Gaulier-trained clowning from Maddy, intensely serious acting from Marina and a whole closet full of family secrets. Don’t forget to bring a box of tissues! (Material is suitable for anyone who has, or has seen a sister).

Fresh off sold-out shows in New York, London, Melbourne and LA, award-winning clown Zach Zucker returns to Edinburgh with an hour of high-energy, absurdist, standup comedy, as the human tragi-comedy that is Jack Tucker. Hailing from the historic New York ‘The Big Apple’ City, Jack Tucker is every bad joke, cringe-y trope, inappropriate statement and all the worst comics you’ve ever had the displeasure of reviewing in one. A well-respected journeyman and bonafide legend in the Upstate New York regional comedy scene, Jack Tucker is the ultimate comedian’s comedian. If the joke doesn’t land, it’s not because it isn’t funny – you just didn’t get it.

Meet failed 80s diva and Dorking’s most successful pub singer Yasmine Day. A self-proclaimed superstar, Yasmine (character comedian Jay Bennett) boldly attempts to revive her flagging career with a last ditch effort to pull off shoulder pads and a cabaret extravaganza with the help of her loyal fans (AKA the audience!) Jay Bennett – one half of sketch duo Next Best Thing – returns to the Edinburgh Fringe 2019 with a daring, prima donna-dominated debut solo hour.

David McIver returns to the Edinburgh Fringe 2019 with his second solo hour, Teleport. This autobiographical character comedy show invites audiences to enter a daft dimension where humour and fantasy combine as David portrays his teenage obsession with online roleplaying games, and his use of these diversions as escapism from his mother’s illness.

The Great Emptiness is the real-life story of 2018 BBC New Comedy Award finalist Isa Bonachera and her quest to go to space. Join Isa for a thought-provoking and unapologetically dark hour of offbeat comedy about the universe and broken dreams.Isa’s third solo hour examines the extreme lengths we will go to achieve our aspirations.