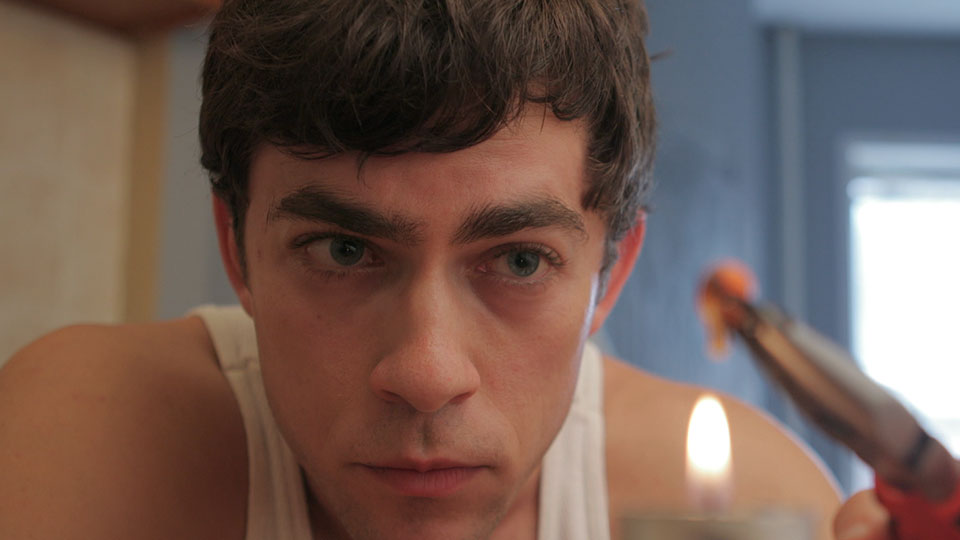 Old friends Wyatt (MacLeod Andrews) and Christian (Evan Dumouchel) bump into one another in New York City. Christian invites Wyatt to stay with him at his apartment so the two friends can reconnect but he’s unaware that Wyatt believes that impending doom is about to wreak havoc on humanity. As Wyatt secretly prepares for an upcoming battle, Christian goes about his day oblivious as he tries to win the affections of his boss Mara (Margaret Ying Drake).

Running at 80 minutes in length, They Look Like People lulls you into a false sense of security for the first 30 minutes before leaving you on the edge-of-your-seat with dread for the last 50 minutes. The film takes its time setting up the premise and acquainting you with the three leads, who all have an easy chemistry that really pops on screen. Things take a sinister turn when Wyatt starts receiving phone calls from a mystery person warning him that the people he cares about the most are actually evil creatures about to bring down humanity.

What Blackshear does so effectively with the film is he leaves a huge question mark over Wyatt’s mental state. Is a battle really about to unravel on Earth or is Wyatt actually in the midst of a mental breakdown that no one around him is noticing? There is evidence to support both theories and that’s part of the fun of the film. Blackshear isn’t interested in giving you comfort. He wants to pull the rug out from under you and make you wary of everything you see unfold on the screen, and he does it masterfully.

MacLeod Andrews is very strong as Wyatt. He plays the character with an everyman sensibility but he brings an edge that many other actors wouldn’t be able to pull off. You want to believe that Wyatt is telling the truth but thanks to Andrews’ layered performance, you’ve never too sure what to believe. Evan Dumouchel impresses once again. He was exceptional in The Siren and here he gives a very natural and realistic performance. In his scenes with Andrews, it almost feels like we’re spying on two friends just living their lives because their chemistry is so good.

Rounding out the central performances is Margaret Ying Drake who is more of a supporting character here. She’s the one we learn the least about but she shares strong scenes with both Andrews and Dumouchel, as well as bringing a little light relief here and there.

They Look Like People is a psychological thriller more than a horror so if you’re looking for blood, guts and epic kills, this isn’t going to be for you. If you’re more a fan of films where you have to piece things together, and draw your own conclusions, you’ll find this film very appealing. I really loved that Blackshear doesn’t go to pains to explain everything to the viewer and I found myself thinking about it long after the credits stopped rolling. I can’t wait to see what Blackshear and his talented cast does next.